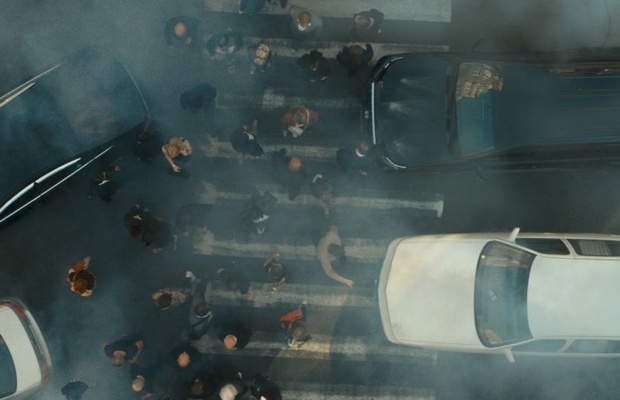 Electric bike brand VanMoof launches its second televised commercial today as part of its latest global brand campaign, this time in the form of a dramatic and highly cinematic film created by VanMoof and shot by Amsterdam-based production company HALAL’s director Paul Geusebroek. VanMoof’s campaign catches the world’s attention again by inspiring people in cities to keep moving forward, instead of reverting to old and destructive pre-pandemic mobility habits.

The new film opens on an all-too-familiar scene: the chaos of a city center in gridlock. And as sweaty commuters climb back into their metal boxes, the film’s message is clear: car domination is a thing of the past. We witness a car collision unfold in reverse; angry and frustrated drivers; stressed pedestrians in a hazy fog of pollution; and a cramped bus with frustrated passengers packing in like sardines. It’s not a pretty sight.

Triumphantly, a bike and its rider rise above the clamor of the city and glide serenely through the chaos. Effortlessly moving forward, she zips through the gridlock, while all around her, cars and their drivers symbolically reverse in time. VanMoof’s commercial demonstrates that returning to the dysfunctional status-quo of congestion, pollution, and road rage is not the way forward. Riding bikes, on the other hand, is the breath of fresh air that both our environment and city-dwellers desperately need.

Pascal Duval, creative director, VanMoof, said: “Even though the whole world had to change their routines, people easily revert to old habits. But if you can change car culture; if you can change peoples’ habits – that is so powerful. Hopefully we’ve made a strong, thought-provoking piece that can spark off more conversation around this topic.”

Throughout the pandemic, people across the world started to stand up for what they believed in. Mobility became a hot topic as people chose to leave their cars at home and city legislators created more space and infrastructure for people, not cars. To put it simply, the world changed. And to make sure people keep up the momentum of positive mobility change, VanMoof is stepping in to remind them.

This isn’t any old commercial. Paul Geusebroek, director at Amsterdam-based production company HALAL, was ready to pull out all the stops to create an ambitious, thought-provoking, and iconic film. Using meticulous camera and character choreography, richly cinematic imagery, and a stunning depth and scale to the production design, he’s created a film that people will remember. And if that wasn’t enough, he hopes it will steer them towards a greener, calmer, and more enjoyable lifestyle.

Paul Geusebroek, director, HALAL, comments: “My aim was that the end of the film feels like a breath of fresh air. This bicycle stands for not just the environment, but also for escaping the rut that people are in – for cycling out of that nine to five grind. It stands for freedom: everyone is stuck, but this person is just breezing through.”

The campaign runs worldwide on YouTube, Facebook, Instagram, and Snapchat, and will be shown on TV in the United States (from August 16) as well as in the Netherlands and Germany. It will be the first time that VanMoof airs a TV commercial in the US.

Following a massive surge in e-bike demand brought on by the COVID-19 pandemic, the US is VanMoof’s biggest growth market. VanMoof’s commercial is airing at a critical time: it follows a study commissioned for World Bike Day by VanMoof in partnership with YouGov which evidenced the shift in mindsets and behaviors towards biking in major US cities. With existing VanMoof Brand Stores in New York City, Seattle, San Francisco, and a Los Angeles location opening in the fall, the US VanMoof community is expanding rapidly.

Last year, VanMoof's first-ever TV commercial was banned from French TV by the ARPP (Autorité de Régulation Professionnelle de la Publicité) for creating “a climate of fear”. This unprecedented reaction focused the world’s attention on VanMoof. In their second advert, cars reflect the rat race of our inner-city mobility habits. The film invites viewers to rethink transportation in cities for a cleaner, greener future.

With a powerful motor, automatic electronic gear shifting, integrated anti-theft technology, and the Apple Find My network, the VanMoof S3 & X3 are custom-tuned for the ultimate riding experience. VanMoof’s range of e-bikes isn’t just the most innovative and powerful the Dutch bike brand has ever made – it’s set to revolutionize the way people move around cities forever. The high-performance VanMoof S3 & X3 open the road to the latest rideable tech at $2298. Available worldwide in VanMoof Brand Stores and at vanmoof.com.