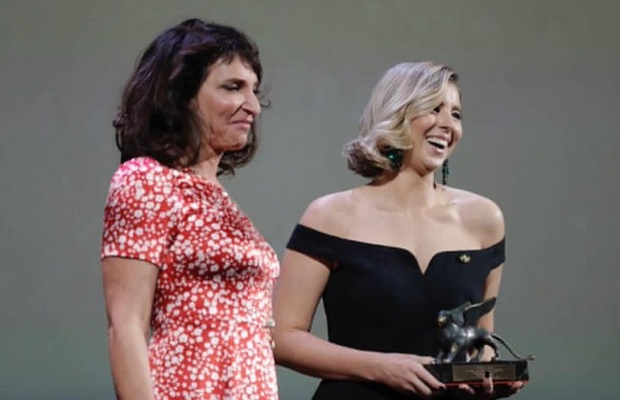 ‘SPHERES’, directed by Chromista's Eliza McNitt, has won the Grand Prix in VR at the Venice Film Festival.
Eliza’s VR series made history at the Sundance Film Festival when it became the first-ever VR experience to be sold in a seven-figure festival acquisition. ‘SPHERES’ is a three-part episodic journey through space and time, executive produced by Darren Aronofsky and Ari Handel, through Aronofsky's company Protozoa, Episode one, Chorus of the Cosmos, premiered earlier this year in Venice, narrated by Millie Bobby Brown (Stranger Things’ Eleven). Episode two, Songs of Spacetime, which premiered at Sundance, was narrated by Jessica Chastain. The third episode, Pale Blue Dot, previewed at the 2018 Tribeca Film Festival and is narrated by Patti Smith. Venice VR was the first time all three films were shown together.
“I’m truly honoured to receive the award,” Eliza said in a statement. “It’s remarkable to experience the oldest film festival in the world embrace the newest forms of storytelling.”
Eliza specialiSes in VR and traditional filmmaking, often working alongside scientists to tell stories about the human connection to the cosmos. She is a two time winner of the Intel International Science & Engineering Fair, with work that has appeared at major film festivals, including Tribeca, SXSW, Sundance, Hot Docs, Cannes Next and AFI. Recently she collaborated with Karlie Kloss on a series for Ford called “Trailblazers of STEAM,” and with Google, for Pixel, to create the short-film, Dot of Light, following three astronauts' journey to the stars.
Chromista was founded in 2013 by Academy Award nominated director Darren Aronofsky (Black Swan, Wrestler) and partners Scott Franklin, Sandy Haddad and Ted Robbins. Chromista's roster includes Aronofsky, Eliza McNitt, Xavier Mairesse, Marcelo Burgos, Kasra Farahani, Dael Oates, Alessandro Pacciani, Elliott Lester, Daniel Portrait, and Josh Cole.
Photo credit: Dean Podmore