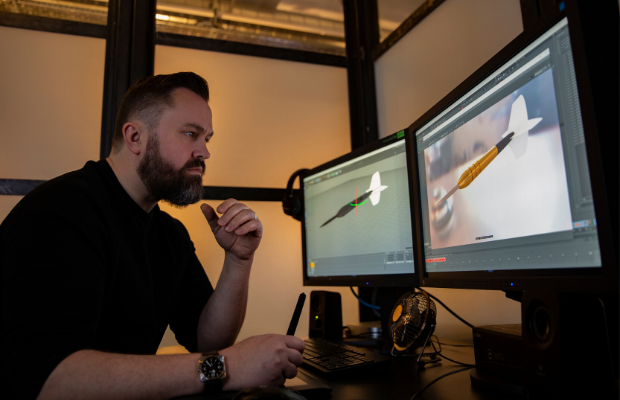 For post-production company ENVY Advertising, the addition of motion graphic designer Bill Wright, is a key next step in growing its VFX offering. Bill has a rich history of developing departments and is equipped with previous experience as Head of Motion at Gramercy Park Studios, and Fourleaf and The Farm. His mandate is an exciting one - growing ENVY Advertising’s VFX department and directing his invaluable skills towards the exciting projects coming through the door, strengthening the creative capabilities across the board.

In this interview we chatted with Bill about his new pasture, how he’s bedded in and what’s hot in design.

Q> Congratulations on your big move. What drew you to ENVY Advertising?

Bill> The size of the company was a big factor; I’ve worked for facilities where you can really get lost in the machine. For some people, that’s fine - especially if you want to keep your head below the parapet - but it’s not so great if you want to progress and challenge yourself. ENVY Advertising offers that boutique approach where you build great bonds with everyone; Flame OPs, colour, editors and the audio team. A company this size is great because a lot of creativity comes from being in the eye of the storm.

Q> Did you have any experience in developing departments before you joined ENVY?

B> The opportunity to develop ENVY Advertising’s motion graphics department and be really hands-on in growing the team is an incredibly exciting prospect for me. This is the second decade I’ve been developing departments now - I have a decent body of work behind me as well as a wealth of experience in project management. It very much needs to be a collaborative effort between the creatives and the engineers/IT, in terms of developing the department’s tech side - which is great because we’re upgrading a lot of aspects at the moment.

Q> Do you feel bedded into the ENVY fabric now? What are some of your highlights from your first months?

B> Definitely. I got stuck in straight away on a really big job - a promo film for the JFK Museum. Gary Shaw (who shot Duncan Jones’ Moon) was the DoP on it so I knew immediately that it was going to look fantastic. I went in on the first week as the shoot’s VFX supervisor and while it was really a baptism by fire. Everyone was really invested in the project and it was great for me to get to know the team that way.

Centred around the first black female astronaut, Mae Jemison, the promo for the JFK Museum app is an orbital move around three generations so the casting and set design were huge. It’s very cinematic in style - a montage of shots from 1960 to now. Our Flame Op, Martin Waller, and I supervised the sets, scene extensions and various replacements from the very start. The rebuild really was a huge part of the environment.

Q> Which industry trends do you see coming to the fore recently?

I’ve noticed a new hybrid emerging, of taking the creativity and style from the ‘80s and mixing it with crisp modern graphics. With the Netflix takeover there’s been a massive fetishisation of 1980s nostalgia - I would say that drawing on ‘80s style graphics has gone on longer than the actual decade has. When you look at an old VHS tape and see the bleed and the low-res quality, it was something we accepted as just a side effect of the technology at the time, whereas now, it’s something we’re trying to purposefully recreate.

Now, when I watch anything on Netflix or Amazon, every single distribution logo has been made as if it was still the ‘80s. I like it a lot, but it is becoming slightly oversaturated - I expect this will lessen over the next couple of years.

Q> Recently, we’ve seen a spotlight on how passion projects work in tandem with creativity. Do you have anything you pursue in your down-time which feeds your creativity?

I restore mid-century furniture - it’s my analogue space away from work. It can take anywhere from an afternoon to six months, depending on the size of project and the knowledge I might need that I didn’t initially have. It’s nice to do something based in the physical world.