Created by AMV BBDO, the campaign highlights how the device can help the two generations spend more time together 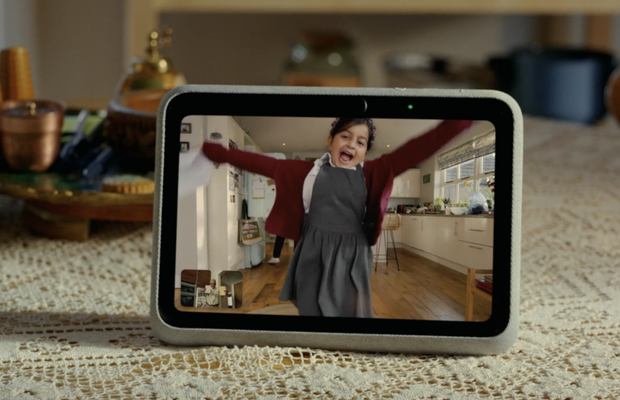 The campaign will focus on the important connection between grandparents and grandchildren across TV, digital, social and OOH encouraging families to take advantage of the many benefits that come with sharing experiences through video calling.

The campaign also marks the start of a partnership between Portal and YoungMinds, extending through 2022, to reach and recognise the vital role that trusted adults like parents as grandparents can play in supporting the mental health of young people.

Developed with AMV BBDO, the work was driven by research that found that nearly two million UK grandparents only see their grandchildren once a year. So, whilst many families have been able to reconnect in person, the reality is most British families remain separated by geography, especially grandparents from their grandchildren. The campaign sets out to show that Portal allows these two generations to share more real moments together - even when separated - and have more meaningful conversations without worrying about the tech getting in the way, while inspiring parents to connect them more often.

A multi-channel strategy covers e-commerce, digital and social media ads and OOH across the country. The campaign will also include a hyper-local activation in Bournemouth. Messages of love from grandchildren will pop up in DOOH placements all over the town, home to more grandparents than anywhere else in the UK.

The films for TV and social were directed by multi-award-winning film director Joanna Nordahl. The 15, 30, and 60 second’ films feature real British families having heart-warming interactions over Portal. In one of the AVs, 'Gold Star', a grandpa waits the whole day until he receives a call from his granddaughter after school to tell him she’s won a gold star for spelling cucumber. The grandfather then reveals he also has something real to share: he’s keeping track of all her daily achievements.

The campaign will be further brought to life across Facebook’s owned and organic social channels with a collection of short films developed by VMLY&R. The creative focuses on the important role of shared experiences with our grandparents, connecting the dots between the paid campaign and what the community will see in their feeds throughout the campaign period.

Aaron Hoffman, director international marketing at Facebook Reality Labs, said: “As we prepare to launch our newest video-calling devices, Portal Go and Portal+, this campaign shines a light on how important the relationship between grandparents and grandchildren really is. There are incredible mental and physical benefits the bond between these two generations can unlock when they’re able to connect more often.”

AMV BBDO creative directors Neil Clarke and Jay Phillips, said: “Portal is all about sharing something real and having those meaningful moments of connection regardless of where you are. Simply by sharing a school accolade over a Portal call or connecting with a distant grandson to read them a bedtime story, the campaign demonstrates that our connections and relationships grow stronger on Portal”.

The creative work follows a media partnership with ITV, which saw the brand taking over the channel program on Grandparents Day in early October. Spots co-produced by Facebook and ITV featured talent from the channel, including Ferne McCann, Ashley Banjo and their families sharing how Portal keeps their kids and grandparents in touch and encouraging people to celebrate Grandparents Day with their families.