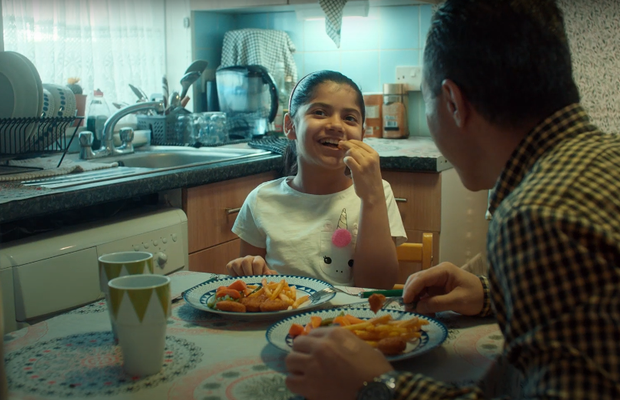 ‘Little Moments’ is the name of the latest campaign for potato-based food purveyors McCain, in partnership with childhood disability charity Family Fund. It’s also director Finn McGough’s specialty. In his illustrious filmmaking career he’s written, directed and produced drama-docs Banged Up Abroad and Alive, spent a week in the Amazon jungle and was blindfolded and dropped in the Azerbaijani wilderness as part of Channel 4 series ‘Lost.’ And he’s been widely awarded for both his commercial and TV work due in no small part to the fact that whenever he gets a human in front of his camera, he manages to capture them with total honesty and authenticity. That’s exactly what makes McCain’s ‘Little Moments’, created by adam&eveDDB, so brilliant.
The UK campaign for the beige food experts aims to drive awareness of Family Fund, an organisation that provides grants and services to families raising disabled or seriously ill children. Covid-19 has affected many of these families severely, and the partnership between the chip brand and the charity seeks to make sure they can enjoy the little moments that matter.
The film features six real-life families from around the UK who have been helped by Family Fund, intimately depicting those little moments that mean the most to the children, such as coming together around the dinner table.
LBB’s Alex Reeves wanted to know more about how Finn captured the warmth of these real families, so he asked the director a few questions.

LBB> Firstly, oven chips (and other potato-based products from McCain's range) are amazing. Obviously you agree. What is it about them that makes them so brilliant?

LBB> When you got the idea from the agency, where was it at, and what were your first thoughts?

Finn> It was a strong idea and well thought through. There was a tightly written script, but of course we were shooting with real families and young children - not actors, so there are always question marks around what we’ll get and whether it will work as sold or not. I’ve worked with McCain’s and adam&eve successfully on a number of jobs now, so there was trust in me and a confidence that with the right cast we could bring this film to life.
It had to be 100% authentic to work. The goal was to give the children a voice, let them speak in their own words about what their families meant to them. There were a lot of unknowns but that gave it an energy. It's this documentary way of making commercials that I enjoy - building a framework, but finding in the edit that it's the unscripted moments that connect the most and make the spot memorable.

LBB> How did you go about working out how you were going to bring these moments to life in the right way?

Finn> The challenge as I saw it was balancing the three elements: the product, the charity and the families and doing so without sacrificing the children’s voices. I like to think we pulled it off and that overall the film serves everyone.
Of course there was a lot of sensitivity - bordering on anxiety - around when we shot this. We were still in lockdown and we were filming with children with disabilities who were particularly vulnerable. We were extremely conscious and cautious and it was our priority to ensure everyone we worked with, namely the children and their families were comfortable at all times. I wanted to take the lead from our families, and in doing so help ensure we get the most authentic version of their stories on film. To my mind this was a ‘collab’ between us and the kids, a great opportunity for them to tell their story and do something creative and I wanted them to seize it with both hands.
In the end all the families were graciously up for doing all we could within the guidelines. The success of the film is down to forging playful and trusting relationships with those who took part. In the end they all really got stuck in. Each child only has a few seconds on screen so somehow it was about trying to portray something of their essence and personality in just a few seconds screen time.

LBB> There are a couple of very obvious production challenges inherent in this film. How did you get around them?

Finn> Of course it's a real challenge trying to bond with an eight-year-old child with autism when half your face is masked, but the challenges were more at crew level than with the contributors. I met Rina (the DOP) for example for the first time at Euston station (which was “28 Days Later” deserted). While normally this train journey would be a ‘getting to know one another’ journey in this instance we were on separate tables wearing masks. Likewise, in the van it was separate seating rows. And in our hotels, the bars and restaurants were closed so it was Deliveroo alone in your room. OK, hardly Ben Hur… but when shooting from the hip doc-style it's nice to have a rapport with the DOP as once we were in the families’ homes we had to be free flowing and unassuming. Some of the kids might be nervous or might peak energy wise at certain times - there wouldn’t really be an opportunity to shoot take after take or even to review. Fortunately Rina’s whole approach was super relaxed. She’s equally great at getting stuck in with little but available light in an observational style, as she is with the more elaborate lighting set-ups I’ve seen in her work. The result is a really intimate photographic style - the camera feels part of the family.

LBB> What was the atmosphere like on the shoots? And how did you make sure it was right for the film?

Finn> Atmosphere couldn’t have been better. Everyone was just so happy to be up and busy and interacting with people. We all had to drive separately and I did about 1500 miles on that trip. I’ve never been so excited to go to Preston in my life - it was just great to be out of London. I think by 09:30 on the first day of shooting I’d interacted with more people in person than I had the whole previous four months so it was a welcome energy change.
I’d like to think the positivity and goodwill of everyone involved shows through in the mood of the film. These kids were so brave to open up in such a personal way, to let us masked strangers into their homes. It's nigh on impossible to “just be yourself” when instructed with a camera in your face. So it was a ‘slowly, slowly’ approach. We’d film a lot of play at first which broke the ice; the hardest part were the interviews because suddenly the room is quiet and everyone is listening. But the kids were invested and very on board by that point.

LBB> What will you remember most from the experience of making it?

Finn> Honestly I was touched by how extraordinary these kids were, in the true sense of the word. So positive and mature - I felt put to shame. I learnt so much. About coping with physical disabilities and about autism too. During our shoot Joseph, one of the kids with autism, insisted me and him have some “guy time” and shouted to the crew to shut up and leave us alone for 20 minutes while he showed me his scrapbook in his room. He was so funny and so honest. We were on a schedule of course but I had to honour him also. He then got a taste for it, shouting “cut” and “it's a wrap”. He had a real confidence and creative spirit. I really hope he gets more opportunities to express it.
Also… after a day's shoot in Nottingham and a drive to Preston in glorious sunshine I decided to escape my hotel room and ended up randomly in a pine forest on top of a hill and got bewitched by a white owl. It led me through a clearing to the other side, revealing this beautiful landscape vista as the sun set. A full moon came up too, and as I headed back to the car the white owl appeared again landing just meters away from it. I then watched the final rays of sunset by a reservoir on my own which was so tranquil after 12 months of pandemic in London. When I showed the footage of the owl in the forest to the PM the next morning, she said “wow, I got a pizza to my room, you went to Narnia”. I found a real unexpected magical moment in the unlikeliest of places. I needed it after last year.

LBB> Are there any particular bits of the film that you really like now it's out there?

Finn> At the end of one of the cuts Ben says, “I love the time I spend with my family, it always brings a smile to my face”. There was an illustrative version of these words in the script, but this was his genuine response to a question, and his delivery is so moving, sincere and genuinely full of love for his family. It encapsulates the entire spirit of the campaign.

Finn> If you’re ever in a Trust House Forte off the M61 on your own wondering whether to stay in and get a Deliveroo - don’t, it's worth a punt on an adventure.