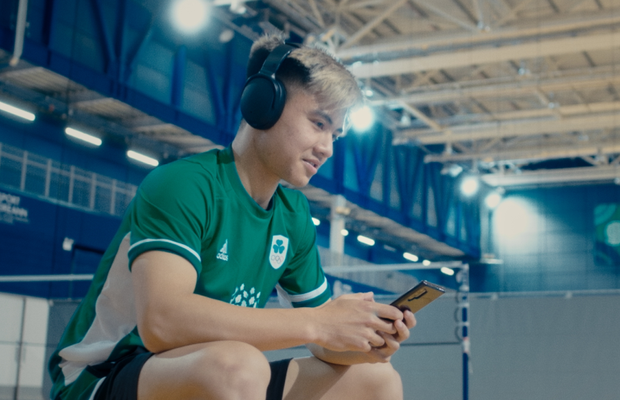 Team Ireland official sponsor FBD Insurance has teamed up with The Public House to launch ‘Sound Support’ for Irish Olympians, bottling support for Team Ireland athletes which they can take with them to Tokyo next month.

Earlier this year it was announced that international spectators would not be allowed to attend the Olympics in a bid to curb Japan’s Covid-19 incidence rate. FBD’s new campaign sends homegrown support to Irish sporting heroes as they embark on an Olympic journey like no other. With no vocal support for competing athletes, this will be the toughest competition of all time.

Sound Support takes the form of high intensity music tracks, with beats and tempos made out of the recorded sounds of each athlete's workouts, then messages of support from athlete’s loved ones layered on as vocal samples.

To ensure the tracks would resonate, Team Ireland sports psychologist and former Olympic Hurdler Jessie Barr came on board to review the impact of music on athletic performance and Irish music producer Richard Egan was then enlisted to implement optimum heart rate BPM outputs for each track.

Brian Healy, marketing manager, FBD, said: “Support is what we do at FBD Insurance, and as official sponsors of Team Ireland we wanted to recreate the great homegrown support that we know our athletes are going to miss in Tokyo. FBD’s Sound Support won’t just bring messages of support from Ireland to Japan - we hope it will enable our Irish Olympians to dig a little deeper, find some extra motivation and set a new personal best”

Colin Hart, creative director, The Public House, said: “Irish support at major sporting events is always something to be proud of. We want to make sure this year’s Olympic Games are no different. Even if no Irish fans are singing from the stands, their support will be felt by the competing athletes and that’s what really matters.”

The campaign focuses on Social and TV as the key channels, telling the story of how FBD created these unique tracks for Ireland’s Olympians. The custom made tracks are available on Spotify

PHD led the media planning for this campaign, creating a multimedia approach for Sound Support focusing on TV, VOD, online and OOH. FBD Sound Support will be in rotation on TV, with 60” spots running from late June up until the Olympic Closing ceremony in August. TV will be supported by VOD showing people where to watch the full film. Tactical OOH will run during the games in high footfall urban locations around Ireland demonstrating FBD’s ongoing support of Team Ireland as the competition begins in Tokyo. Social will play a key role in telling the story and utilising shorter form content to directing people to view the full film and to listen to the tracks. All media will work together to showcase the Sound Support message and let people know where they can watch the full film.