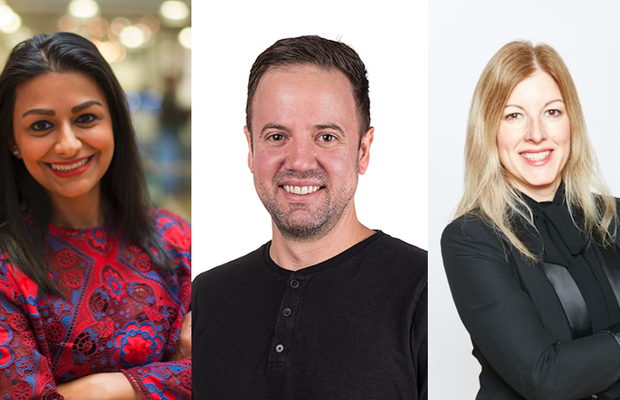 To continue the development in FCB’s ongoing investment in data and tech-fuelled creativity, the Network has announced today that Priyanka Goswami, Grace McCann and Rob Sturch are being promoted to lead FCB/SIX Canada. Long-standing leaders of the FCB/SIX Canada management team, this proven trio has helped fuel much of the creative data network’s success, including Data Agency of the Year wins and top award winning work like Black & Abroad’s ‘Go Back to Africa’ and PFLAG Canada’s ‘Destination Pride.’ The newly named leaders will report to FCB Canada president Bryan Kane and work closely with Tina Allan, FCB’s recently appointed global head of data science &  connections.

“This is a pivotal time in the modern data landscape where our clients are accelerating their focus on their first party data strategy to drive business value. This team will continue to innovate, accelerate and drive performance and growth for our clients’ businesses. They are true leaders, partners, specialists and connectors,” said Bryan.

All three leaders will now serve on the management teams of both FCB/SIX and FCB Canada:

• Rob Sturch, executive creative director (four years at FCB/SIX), who has been a multifaceted creative leader in his 15 years within the industry, leading award winning campaigns for clients like Volkswagen, Stella Artois and Cheerios, and who now employs creativity, data and technology to drive meaningful connections.

“Our team is excited about the next chapter of FCB/SIX. We’ve cracked a unique formula that delivers highly repeatable packages of excellence to our clients. It is our culture, our people, our sense of collaboration and specialism, our tools all wrapped together that enables us to create connected 1:1 experiences and platforms that are more adaptive to the market (global pandemics included). This magic formula has and will position FCB/SIX as a driver of business value and growth,” said Priyanka.

With FCB/SIX’s rapid expansion, it now has teams in New York, London, Toronto, Montreal and San Francisco and – with increased client demand for CRM, data, technology and personalisation – is continuing to expand globally as a key part of FCB’s worldwide network  of offices. Last month, it was announced that Tina had hired Juliana Vilhena Nascimento as managing director to head FCB/SIX’s newest operation in Brazil.

“This trio of Pri, Grace and Rob, makes the work and each other better at FCB/SIX. The art and the science. Using the true power of data, technology, and creativity to unlock a brand’s potential to connect with consumers 1:1 at scale on both functional and emotional levels, they will lead the team at FCB/SIX. They bring the magic to the math of driving our client’s business forward. I couldn’t be prouder of this team and I’m so excited for what’s next,” said Tina.

Named Ad Age’s 2019 Data & Analytics Agency of the Year, FCB/SIX has continued earning top industry recognition, with 17 D&AD Pencils in 2020 and 17 Cannes Lions since 2016, as well as earning top honours at The One Show, Goodvertising Awards and Cresta Awards in  2021. The creative data capability is an integral part of FCB’s global growth strategy, which continues to deliver big success, including the Network being named Global Agency of the Year by Adweek and Network of the Year at Cannes Lions 2020/2021.