Change The Ref and Leo Burnett Chicago create graduation ceremony for 3,044 members of 'The Lost Class' to highlight the tragic impact of gun violence 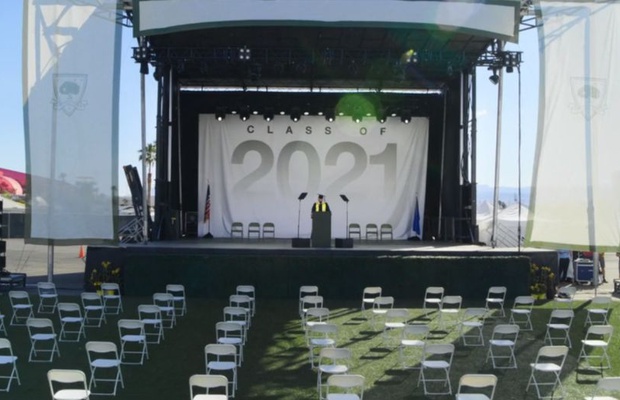 3,044 students did not graduate this year due to gun violence. Change The Ref is making sure these victims are not forgotten, and forced pro-gun legislators and proponents to face the consequences of their policies by creating “The Lost Class.”

This month, a graduation ceremony was held to honor The Lost Class – led by the most unlikely commencement speakers.

David Keene, former president and current board member of the NRA, and John Lott, American economist, political commentator, and gun rights advocate, have spent decades using their power and influence to block background checks and common-sense gun reform, which could have saved thousands of these graduates’ lives. Instead, they walked out onto the stage to find themselves addressing thousands of empty chairs about the bright futures they would never have.

Video footage of the graduation ceremony and speeches are available at TheLostClass.com.

Both Keene and Lott believed that their speeches were for the graduation ceremony of a local Las Vegas high school, James Madison Academy. Ironically, had the men conducted a proper background check on the school, they would have seen that the school is fake – the creation of Change The Ref, Leo Burnett and Bryan Buckley of Hungryman.

“Graduation day is meant to symbolize potential and achievement. But for this group of students, it’s become a day to wonder what the rest of their lives would have looked like,” said Manuel Oliver, whose son Joaquin was one of the 17 victims in the Parkland massacre. Manuel co-founded Change the Ref with his wife Patricia in Joaquin’s memory. “Let’s not lose another class of students to the gun violence epidemic. Let’s demand that we make graduating America’s children more important than gaining uninhibited access to guns.”

Gun violence is the leading cause of death among middle and high school students. Despite much of the country being shut down, 2020 was the deadliest gun violence year in decades, and so far the U.S. is exceeding that pace through the first five months of 2021. Using CDC data, the size of the Lost Class was estimated by compiling firearm deaths, by age, since 2003 and matching it to the grade that the Class of 2021 was in at the time.

While gun violence may have stolen their futures, Change the Ref is making sure members of The Lost Class can still make their voices heard by urging the government to require universal background checks on gun sales.

The Lost Class’ graduation gift, a petition to demand that lawmakers take action in requiring universal background checks, is available at ChangeTheRef.org.