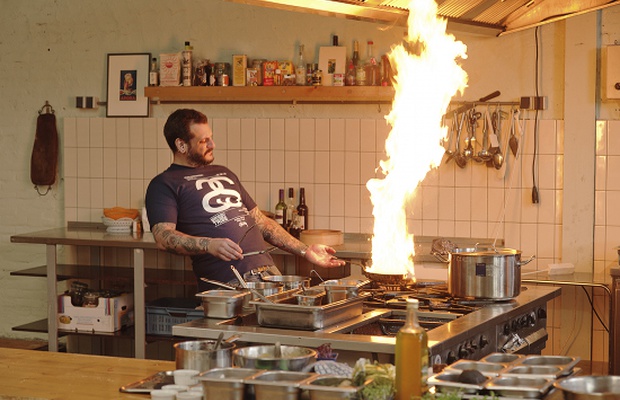 FreshCotton, the online men’s clothing store, launches a limited edition Stüssy Amsterdam tee in a way that gets your taste buds – and imagination - going.
With their Baked cookbook they are challenging the boundaries of gastronomy by nudging the liberal Amsterdam coffeeshop culture towards something more high-end and discerning.
Working with ad agency Arnold Amsterdam, responsible for the viral success of Stüssy Amsterdam Strip For Likes social media campaign, FreshCotton decided to avoid the usual Spring Collection Lookbook and instead created a Cookbook – with a twist.
“This project represents what we like about Amsterdam – fashion, good food and having fun”, says Colin Lamberton, Creative Director on the project. “The cookbook is very relevant for today’s mash-up culture. Cooking shows are really popular so we wanted to create an alternative take on cooking – one that feels more raw and experimental in premise, but looks and tastes beautiful and sophisticated.”
“It’s haute cuisine, Amsterdam style: using every street-legal drug you can imagine. From well-known marijuana to more esoteric buzzes” explains Rickard Engstrom, who (with his creative partner Joris Kang’eri) was responsible for the idea. “Chef Misha will show you how to make truly mind-blowing, beautiful food”, says Colin Lamberton, says Jesse Smit, CEO of FreshCotton. “And in return for a Tweet you can download a recipe book for your tablet or to print”.
The project showcases a selection of Amsterdam talent working together– the films were directed by Doug Hancock through Darlings Amsterdam; the digital execution was done by highly-regarded interactive studio Cartelle; and the music was provided by Full Crate, a producer who fuses hip-hop and soul with a futuristic sound design. Neil Henry, of Arnold Amsterdam produced the campaign.
The main protagonist in the cookbook is heavily-tattooed Chef Misha Sukyas, who brings a history of haute cuisine and an interest in experimental techniques. Misha blends perfectly with FreshCotton styling in the seasonal Lookbook – which shows a really exciting mix of high-fashion combined with traditional street culture.
Download your own cookbook here: http://baked.freshcotton.com
Watch recipes below.
China Town Dream
Chef Misha makes morning glory ravioli with coquilles, damiana & marijuana.
Clash of the Titans & Voilage
Chef Misha makes a Savoury Cappuccino of Bali Kratom, Hashish & Baby Woodrose with Foie Gras Marijuana Lollipops coated in Magic Truffles.
322 EL Camino
Chef Misha makes veal in a Salvia Divinorum Crut with Magic Truffles and Marijuana.
These cooking videos are part of the 'Baked by FreshCotton' project. To see all the extreme cooking video's check: http://baked.freshcotton.com