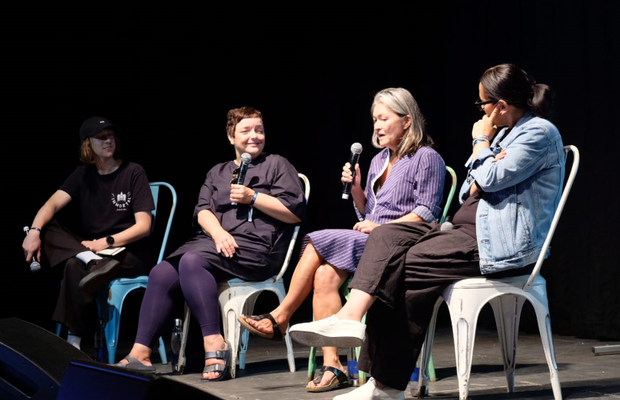 Looking at Kai Hsiung, Vicki Maguire and Chaka Sobhani, it's hard to imagine them as fresh-faced juniors starting out their careers in advertising. With all three having illustrious careers in the creative fields, day two of the UK Creative Festival was the perfect way to honour them in a panel.

Hosting was LBB’s Alex Reeves who kicked off asking the trio how they got into the industry. As an image of fashionista Vicki, CCO at Havas London, adorned the screen she discussed her transition from fashion to advertising. “When someone said there's an industry that pays you for ideas, I thought, where do I sign, how do I do it? Every morning I wake up with that excitement.” She jokes though that what’s kept her in the industry is two things: teabags and toast.

As the title of the panel suggests, Leo Burnett global CCO Chaka did start off as a runner. Though her entry began far before this, she recalled, growing up in a small town in Devon and being obsessed with films. Shortly after moving to London with her family she contacted every production company she could, but after facing rejection she went into studios. “I was at a studio and had a bar job for nine months so I had one job in the daytime and one in the night. I genuinely can't believe the life that I have had and the luck just to be here. When you feel it's a privilege you never take it for granted.”

Chaka has had years in the industry and reflects that there's nothing else she can do for her happiness. She jokes that it may sound trite, but it's her biggest source of inspiration. “I was always drawn to and driven by people.”

As global managing director of RSA Films, Kai began as an art teacher and was left with a gaping hole during a 12-week holiday where she decided to change it up and become a receptionist in a production company. Her best advice to runners is to have a sense of humour and know how to make a good cup of tea.

Those early years may have been full of plenty of questionable fashion choices, but they were also full of learning curves. Vicki recalled realising that fashion wasn’t for her after being fired from a few jobs but instead of letting it get her down, she decided to channel her resilience. “The more you failed, the less they mattered and the further on I got it was a big thing to realise you’re not going to realise your dream and that other people are better at it.

“Getting paid for something that you do already is the best thing ever. We trade in culture and if you’ve an opinion of something then that door is already open for you.”

Kai added that this business is not for the faint hearted: “It’s about grabbing those opportunities and seeing if you can make something from them.”

For the three powerhouses, being leaders is part of their day jobs. Of course, all three have had terrible experiences with managers that have made them not want to be a certain way including Kai being thrown dry cleaning by a director.

“You don’t squash people, you bring them up. My job as a leader is to surround you with the opportunities and the environment to do the best work of your lives,” says Vicki. She bluntly reminds the audience that we are naive to think that the best talent in the world wants to come out and work in advertising. She adds: “It's still ridiculously hard to get into unless you live in London and have somewhere to stay. The talent, the voices that will make our work and connection to our consumers better aren't necessarily in London and don’t all come from white middle class backgrounds.”

With honesty, Chaka reminded the audience that there’s no shame in asking for help, she herself has a coach and bouncing ideas around is what helps her. She adds: “You’re not born to be a leader, you learn it. I think it's important to admit when you're getting things wrong.

“Trying to be the best version of yourself so you can bring out the best in your people. Hopefully most days I get it right.”

Success comes with its doubts and there’s always a fear that someone out there is better than you. The three panellists were honest about their experiences with imposter syndrome. For Chaka the understanding that everyone has imposter syndrome is something of a relief to her.

For Vicki realising and understanding that she deserves a space at the table has been a real turning point. “You learn through work that actually you have earnt that space at that table. You have learnt to be the voice in the room.”

Her advice to those thinking of joining in the industry is the reminder that the industry is paying you to ‘bring your best self to work’. “When you walk into a room, they are paying you for your opinion. They have put a value on it and so should you. Don’t look to over compensate for your insecurities, own that space.”

It can be something of a pinch-me moment for Kai to realise that she is living her best life at the moment, she is doing what she always dreamt of and so much more. “If you worry too much you’ll never get out of bed.”