From June 3rd through June 18th, proceeds from special Disney and Pixar’s Finding Dory ‘Destiny the Whale Shark’ bundle will be donated by Gameloft to Ocean Conservancy 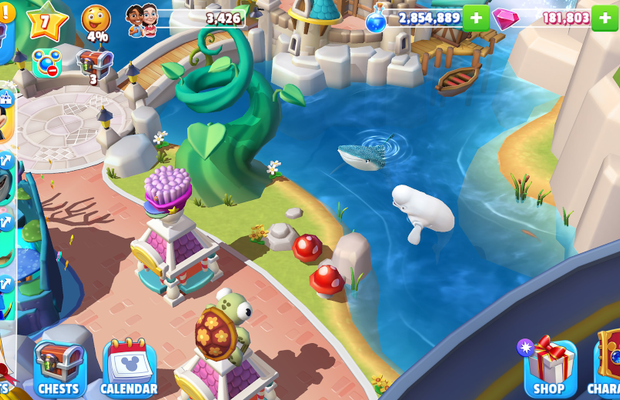 In celebration of World Ocean Day on June 8th, Gameloft, leader in the creation and publishing of games, is thrilled to announce an upcoming fundraiser in collaboration with noted conservation nonprofit Ocean Conservancy. The fundraiser will take place in Disney Magic Kingdoms from June 3rd through June 18th 2021 as part of the new Finding Dory event. Players will be able to purchase a new ‘Destiny the Whale Shark’ bundle – and proceeds ($5.59 USD per bundle*) will be donated by Gameloft to Ocean Conservancy to support oceanic conservation with a minimum donation of $120,000 USD/€100,000 EUR, and a maximum donation of $480,000 USD/€400.000 EUR.

Founded in 1972, Ocean Conservancy is a nonprofit environmental organization that is working to protect the ocean from today's greatest global challenges. Ocean Conservancy focuses on science-based solutions for a healthy ocean and the wildlife and the communities that depend on it.

"Ocean Conservation is a cause very near and dear to our hearts at Gameloft and Gameloft Toronto” said Rebeca Polo, sr. product marketing manager for Disney Magic Kingdoms. "Bringing together the magic of Disney Magic Kingdoms, Finding Dory, and the wonderful characters of this film in a way that can positively impact oceanic wildlife, including real whale sharks and other species, is a dream for us. Let's protect the ocean together!"

Players who purchase the Finding Dory ‘Destiny the Whale Shark’ bundle will welcome Destiny to the game. This bundle will also include an adorable Dory Wishable Concession Stand that players will be able to add to their Kingdom, and its price will be $7.99 USD. In addition to this charity bundle , players logging into the game during World Ocean Day (June 8th) will also receive a very special ocean-themed gift – an exclusive Anemone Hat Concession Stand!

“We are so appreciative of Gameloft in bringing the wonder and awe of the ocean to the Disney Magic Kingdoms’ community during World Ocean Month” said Sarah Humphries, vice president of resource development at Ocean Conservancy. “We are especially grateful to the Gameloft team and the millions of users playing for supporting Ocean Conservancy through this special ocean month campaign, which will help us tackle the greatest threats facing our ocean, and the wildlife and communities that depend on it.”

More information about Ocean Conservancy can be found here.