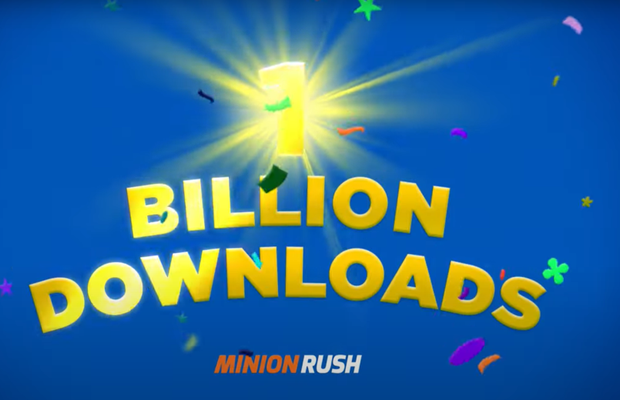 Gameloft, a leader in the creation and publishing of games, in collaboration with Illumination and Universal Games and Digital Platforms, is thrilled to announce that Minion Rush, the mobile game inspired by Illumination and Universal Pictures’ Despicable Me franchise, has received more than 1 billion downloads across iOS, Android, and other supporting devices. In the eight years since launch, Minion Rush has become one of the most popular and widely downloaded mobile games of all time and is also the first mobile game based on a film property to reach this milestone.

Launched on June 10, 2013, Minion Rush offered fun and accessible runner gameplay with the signature mischief and subversive humor of the Minions. Over the last eight years, players continue to log in and play their favorite mobile game, experiencing fresh content and new features introduced on a regular basis. To date, fans have collected 90 trillion bananas and completed more than 216 billion miles running in-game, for a grand total of 3.4 billion hours spent playing the game.

In celebration, the team behind Minion Rush is rolling out a commemorative Celebration Event, beginning June 2, 2021, where players will work together to collect 33 billion in-game bananas, to unlock a very special Minions costume. It also features the long-awaited and requested introduction of two new playable Minions, Bob and Stuart. More information on the event can be found here.

"That's right, with a ‘B!’ as in a BILLION downloads," said Stas Sadkeyev, Minion Rush Game Manager from Gameloft Kharkiv. "B as in bananas, B as in boggling, B as in Bob, B as in a billion players! We are so honored to be such an important part of the Minions story, speaking to and engaging with players and fans from all around the world. Very rarely do games reach this milestone, and everyone here at Gameloft is humbled to have made it."

"This remarkable milestone is a testament to the strength and longevity of this franchise and our close collaboration with the teams at Gameloft and Universal,” said Chris Meledandri, Founder and CEO of Illumination.

"When we partnered with Gameloft to bring a Minions game to fans, we knew something special was going to be made due to our shared ambition of bringing a thoughtful, authentic and humor-infused experience to market," said Jim Molinets, SVP of Production, Universal Games and Digital Platforms. "But reaching 1 billion downloads? That's only something Gru would aim for! The game’s tremendous growth and success since 2013 has really been fueled by fan loyalty and appreciation, and we will continue to entertain our players as they deepen their connection with the beloved franchise."