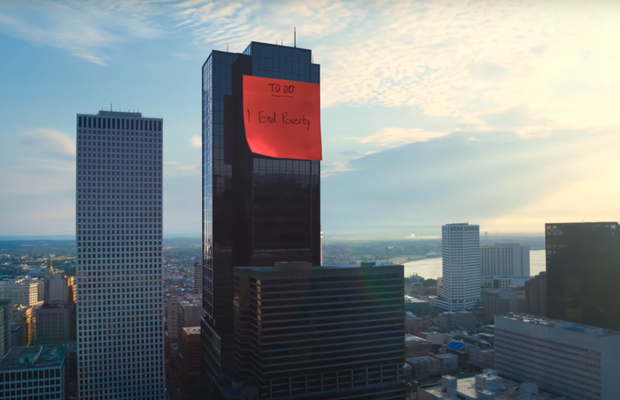 Karmarama, part of Accenture Interactive, has teamed up with Project Everyone, a not-for-profit promoting the Global Goals, devised by Richard Curtis, to unveil "The World's To-Do List", a campaign to inspire action to meet the UN's 17 Global Goals for Sustainable Development.

The campaign enlists some of the world's biggest brands during Global Goals Week, an annual event to mark the anniversary of the Global Goals during the UN General Assembly, from 20-26 September.

The UN's 17 Global Goals aim to end poverty and inequality and solve the climate crisis by 2030. 'The World's To-Do List' campaign urges world leaders to act now to achieve these Goals and gets the business world to put its considerable weight behind them.

The campaign reframes the 17 Goals as "The World's To-Do List" in order to remind people we have a blueprint for a better world. Each goal is hand-written on giant sticky notes placed in iconic locations across the globe and on billboards and projected onto buildings in major cities, from New York to Venice. The playful yet profound messages re-imagine the Goals as a series of short actionable 'to-do's', setting a clear reminder that we have the plan to fix the world's problems; we just need the action to get it done. The 17 ambitious tasks scrawled on the giant sticky notes include 1. End poverty, 2. End world hunger, 5. Achieve gender equality and 13. Tackle the climate crisis.

As part of the campaign, companies, known as the Global Goals Business Avengers, comprised of Arm, Avanti, Commvault, Diageo, DPDgroup, Google, Mars, NTT, Reckitt, Salesforce, SAP, Unilever and Wood (representing over 700,000 employees, with a combined social media reach of over 100m) become the champion of one of the 17 Global Goals. Each company is actively working to raise awareness of the Goals and take actions within their own organisations to help achieve them.

The Global Goals Business Avengers are sacrificing physical and digital space - their corporation's buildings, social media channels and websites - to 17 Global Goal sticky notes. Including sharing the actions they are taking which are contributing to the achievement of particular Goals whilst also stating what is on their 'To-Do List' for the near future.

For example, Unilever has committed to ensuring that everyone who directly provides goods and services to the company earns at least a living wage or income, by 2030, aimed at making progress towards Goal 10 - Reduced Inequalities. Google, meanwhile, recently launched its Impact Challenge for Women and Girls with a $25 million fund to create pathways for women and girls to thrive, aligned with Goal 5 - Gender Equality.

The campaign aims to inspire both business and world leaders to move from talking about doing good to taking real action.

The campaign will be launched with a film created by Karmarama, played at the Global Citizen Festival, a 24-hour live-streamed festival across six continents.

Giant sticky notes will also appear as a large-scale art project throughout India with the Rouble Nagi Art Foundation, painting murals across villages in five states while working with local communities to educate and support the issues raised by the Goals.

The sticky notes will also appear on static and animated billboards worldwide and Instagram, Twitter, and brand website takeovers. Other activations include projections on buildings in the UK and DPD van takeovers.

The launch campaign runs from 20th – 26th September to coincide with Global Goals week, culminating in the Global Citizen Festival. There will be further activity during the COP26 global climate conference in November.

Richard Curtis, Writer, Director & UN Sustainable Development Goals Advocate, said: “It’s been a tough year on so many fronts - but I’m still delighted and cheered every day by the passion and action of so many businesses in support of the Global Goals. It’s such an interesting time, as well, as consumers expect more of businesses and increasingly support those fighting for sustainability and as more and more employees expect their firms to reflect their ethics and priorities. The World’s To-Do List campaign, led by businesses, is a vivid reminder of what is needed, and how the Goals are a To-Do List we all must get done.”

Ben Bilboul, CEO, Karmarama and Managing Director at Accenture Interactive, said: "Time is running out. If we're going to hit the UN's Goals by 2030 we need to shift from talking to doing. And enlist business to help us get there. The world's To-Do list is a simple idea that everyone can get behind, and harnesses the power of business to help save the planet"

Adam Kean, Karmarama Creative Director said: “Important stuff that needs doing now? We write it on a sticky note. Well, it doesn’t get more urgent and important than the Global Goals. So we went big and unmissable. Let’s get The World’s To-Do List done.”