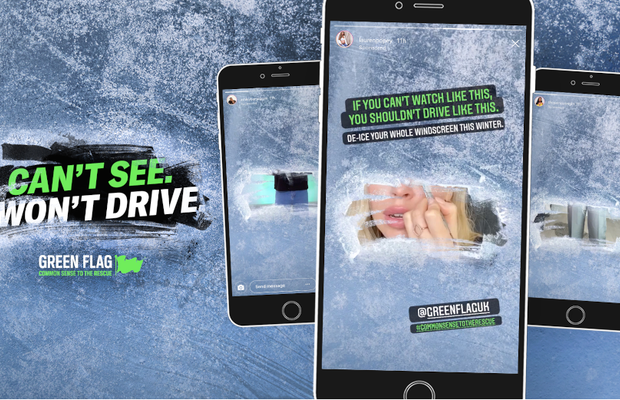 ENGINE Creative is behind an innovative new Instagram campaign for Green Flag in collaboration with dancer Ashley Banjo and content creators Patricia Bright and Lauren Pope, to raise awareness of the dangers of driving without fully de-icing your car.
ENGINE’s campaign will see each influencer post what seems like a typical story on their Instagram account, but with an overlay which creates the effect of an ice-covered windscreen with a small patch scrapped away in the middle. This obscures nearly all of the action, leaving the audience with a very restricted view. Then, a message appears from the influencer saying “If you can’t watch like this, you shouldn’t drive like this” along with a reminder for people to de-ice their windscreens properly this winter.
After a couple of hours, Ashley, Patricia and Lauren also post a follow-up story, explaining what the previous film is all about, pushing the message that if you can’t watch a restricted view video, you can’t drive an iced over car. Using their own words, they’ll remind people that safety is important even if you’re busy or impatient, and let followers know they can swipe up for further advice. The posts will make it clear they are sponsored by Green Flag and feature the brand’s #CommonSenseToTheRescue hashtag.
The Instagram activity is part of a wider push by Green Flag to make drivers think twice before they start a journey without de-icing their car. Research shows that one in three UK drivers admit to driving with limited vision, which is against the law in the UK. This figure rises to 59% among drivers aged 25-34, making them the age group most likely to choose to drive with restricted vision.
Breakdown expert, Green Flag is aiming to get the message out that it’s vital for drivers to allow themselves 10 minutes to clear not just the windscreen but all the windows, mirrors and lights, before starting any journey. 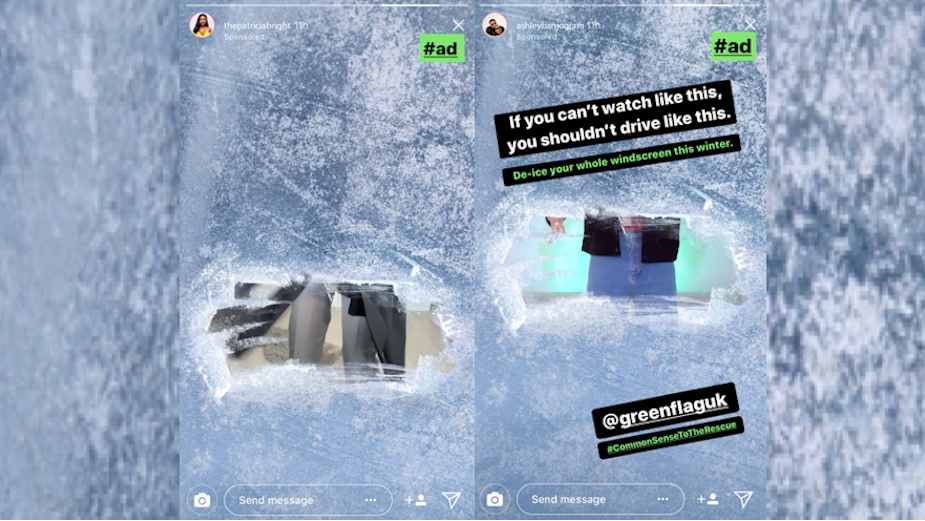 Mark Newberry, commercial director at Green Flag, said: “Hazards can come at us from all angles when we’re on the road so it is even more important that we can see all around us in icy and challenging, wintery weather conditions. The beauty of ENGINE’s concept is that instead of lecturing people about the problem it graphically demonstrates the reality of driving with ice obscuring your vision. It also provides a sobering perspective to those who won’t put up with a restricted view in an Instagram story but may not think it matters on the road, when the harsh reality is that it puts people’s lives in danger.”
“We thought we’d do something about winter road collisions using one thing everyone sees a lot of on social media – influencer content." added Steve Hawthorne, creative director, Engine. "By using influencer content that’s relevant in the here and now, we’re reaching people we wouldn’t reach in traditional channels. We’re proud to work with Green Flag on this project to raise awareness of this important issue.”