To celebrate the start of the new football season, M&C Saatchi Sport & Entertainment got the football legends to surprise fans at home 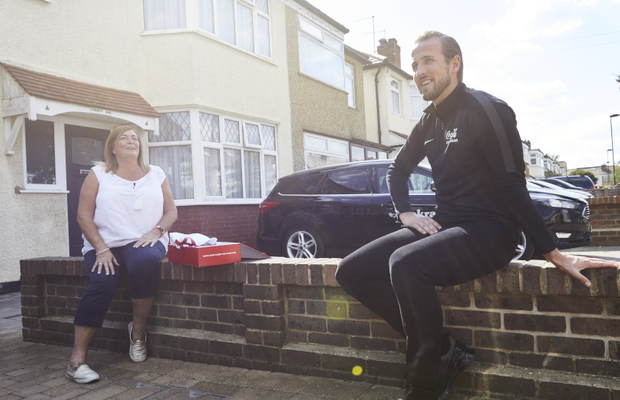 Premier League stars Harry Kane, Marcus Rashford and Alex Oxlade-Chamberlain have surprised deserving fans by turning up on their doorsteps with a special gift ahead of the 2020/21 Premier League season.

Chosen for their love of the game and for helping their families and local communities during the Covid-19 lockdown; the fans include Lynn Stone, aka ‘Tottenham Lynn’, who has been a season ticket holder for 15 years. She was lost for words when her favourite player Harry Kane arrived at her house, while lifelong Liverpool fanatic John Gyeni couldn’t believe Premier League winner Alex Oxlade-Chamberlain was knocking on his front door with a gift for him.

Marcus Rashford had to hunt down Matthew Burrage, a StreetGames volunteer who has been working tirelessly for Sport at the Heart Young during lockdown by providing food parcel deliveries to vulnerable families, as well as leading virtual fitness and mentoring sessions for young adults to prevent them from feeling lonely and isolated.  Matt wasn’t at home for his delivery, leaving Marcus to carry on the search to find him at work preparing for a StreetGames activation for the local community.

The shocked fans were surprised by the Premier League stars and given a Coca-Cola ‘Watch From Home’ gift box containing everything they need to watch the upcoming 2020/21 Premier League season from home, including their club’s brand new Premier League shirt and Coca-Cola zero sugar product.

Harry Kane commented: “It was great to see the look on Lynn’s face when I arrived at her house, she’s been amazing throughout lockdown so it’s good to give back to such a loyal, well-loved fan.  I can’t wait to see her back at the stadium in her usual seat supporting us.”

Marcus Rashford added: “Through my work with FareShare I've seen first hand the difference local heroes have been making in supporting their vulnerable communities. Matt is just another example of someone that has stepped up during the pandemic to make a difference, so I was really happy to have the opportunity to meet him. The gift was thoroughly deserved as he continues to support those most at need."

Alex Oxlade-Chamberlain added: “To meet John was such a special moment. He’s been working so hard throughout lockdown while also supporting his family, so it was nice to drop by with a little surprise. I can’t wait till we can have him at a game at Anfield in the near future, along with all the fans when they’re back.”

The films are a part of Coca-Cola’s ‘Make Your Home The Home End’ campaign, which encourages fans to turn their homes into their club’s ‘home end’ and create the stadium atmosphere there when the 2020/21 Premier League season starts.

Rashford, Kane and Oxlade-Chamberlain join Alex Scott and Jermaine Jenas as Coca-Cola’s football ambassadors for the 2020/21 Premier League season and will be appearing in brand campaigns throughout the season, as well as Coca-Cola’s UEFA EURO 2020 campaign next summer.

Coca-Cola has also launched a new on-pack promotion across nearly 300 million packs of Coca-Cola Original Taste and Coca-Colazero sugar which each week offers thousands of fans the chance to win the Premier League team’s 2020/21 shirt. Promotional packs are now available in stores throughout Great Britain.

Oliver Bridge, Senior Brand Manager at Coca-Cola Great Britain, commented:“With Watching football from home such a special routine for millions and with fans unable to watch the start of the Premier League season from stadiums, we wanted to help turn their homes into the home end and make their at-home viewing experience better. It's been a tough time for a lot of people, so we wanted to say thank you by getting their homes ready for the new season... with a little help from Harry Kane, Marcus Rashford and Alex Oxlade-Chamberlain of course."

Make Your Home the Home End is a fully integrated campaign including radio, digital activity, out-of-home advertising and a partnership with Sky. It Falls under the brand’s Where Everyone Plays campaign launched as part of their Official Soft drink partnership with the Premier League in 2018.