Heineken Ireland's the Perfect Match for the Rugby Champions Cup

The Institute Of Advertising Practitioners In Ireland, Fri, Mar 19, 2021 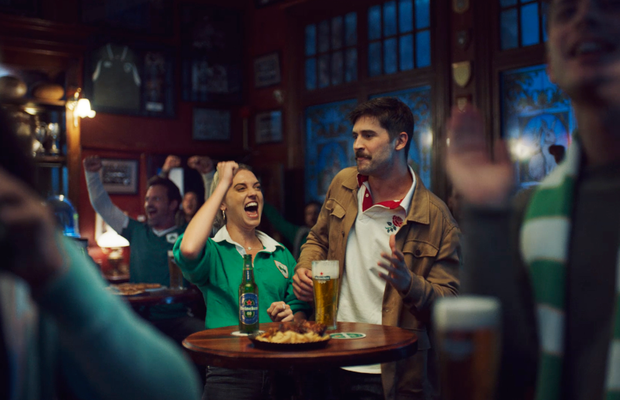 Heineken Ireland has today launched ‘The Perfect Match’ TVC, which will air for the first time this weekend.

The TVC, which was filmed by director Karien Cherry, celebrates the journey of rugby rivalry, and follows three couples, pitted against each other as their rival teams face off. As tensions rise, viewers watch them press pause on love while their teams battle it out.

The TVC marks the start of a busy, integrated campaign period for Heineken sport, with the knockout stages of the Heineken Champions Cup taking place in April and May, before the delayed staging of the Heineken-sponsored Euro 2020 begins in June.

Cape Town-based director, Karien Cherry, has worked on numerous global ad campaigns with Outsider. Speaking about the new Heineken Ireland TVC, she said: “We can all relate to the uncompromising passion we feel for our rugby team. The despair of losing just makes those victories all the sweeter when they happen. This new advert from Heineken Ireland celebrates the social side of rugby. However, in the world of Heineken, your partner might only be your perfect match until the match begins.”

Ronan McCormack, senior brand manager, Heineken Ireland, said: “It’s been a challenging 12 months for everybody but at Heineken Ireland, we are looking forward to some better times ahead and the return of that special match day occasion in the On Trade. This advert taps into that via the world of relationships and rivalries and how they often co-exist. The Heineken® brand is known the world over and particularly here in Ireland, our support for rugby remains as strong as ever. Alongside our Irish agency partners, we’re excited to launch this new ad campaign and look forward to a busy few months of top-class rugby.”

‘The Perfect Match’ brand campaign was developed by Publicis and Heineken Ireland, in collaboration with agency partners Thinkhouse and Red Star. Heineken has enjoyed a long and rich heritage in rugby for over 20 years as a title partner of the Heineken Champions Cup.

IAPI Urges You to 'Choose Words That Heal, Not Hurt' for BeLongTo 2021