CCO at GGH MullenLowe Hamburg, Marielle Wilsdorf, kicks off our final week of Immortal Contenders with five German ads she thinks should be entered into this year's competition 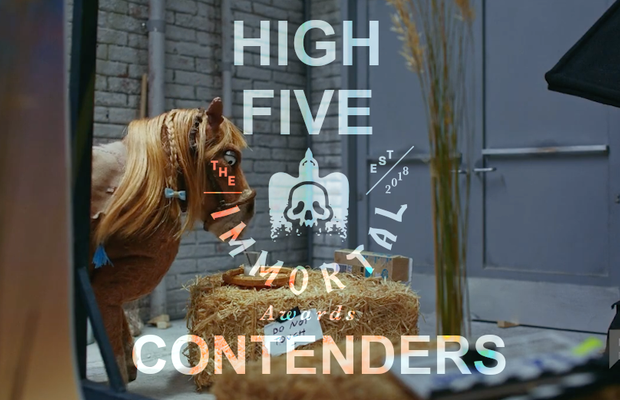 Difficult times have forced us to open up to new possibilities. And by this, I’m not talking about working from home, but about how it brought us to elevate health and think about real and important values, such as the worth of family and friendship. The work I’ve chosen is fun to watch, playful with craft, touches me with its story, or is bringing people’s values and stories to a worthy stage.

Agency: BBDO Germany
Production: Zauberberg
Director: Daniel Warwick
A young man enters a café that reminds us of a meeting point for the gaming community in Tokyo. He puts on VR glasses that catapults him straight into a game where he’s driving one of Ford’s new Kuga SUV models. It’s a super smart interpretation showing the vehicle’s plug-in hybrid function through the real and the virtual sphere. The two worlds of driving - electric and combustion - are seamlessly combined.

Agency: Anomaly Berlin
Production: Anorak x Orange Films x Park Pictures
Service: Romance
Directors: Terence Neale and Emilie Badenhorst
Post: Black Kite Studios
Music: Mista Strange
Sound: Mermade Sound
Zalando’s ‘Here to Stay’ campaign aims to foster dialogue on core values such as diversity, inclusion and women’s empowerment, as well as broadening views on topics such as gender fluidity and body positivity. It celebrates those who stay true to their beliefs and take a stand for lasting progress. It’s coming with that powerful self-evidence about all those important topics at exactly the right time. And I love the play with the media mix.

Agency: Jung von Matt
Production: Markenfilm Hamburg
Post: INFECTED
This campaign tells the story of an older man who makes some effort to get fit in the weeks leading up to Christmas. At the end of the commercial, there’s a surprising twist about the reasons why he’s pushing himself beyond his physical limits. The story grabs you because it’s so moving, and is staged with great attention to detail. Christmas 2020 was a Christmas like no other, because human values - such as family and health - were really brought to the fore.

OATLY - 'Made for Hoomans'

Production: Film Academy Baden-Württemberg GmbH
Direction and Script: Marleen Valien and Max Rauer
I had to give a shout out to this one, although it’s not connected to an agency, but it’s just hilarious. In this spot, we find ourselves on the set of the new OATLY advertising campaign, in which three animals - a squirrel, a mayfly and a pony - have been cast in the ads for the milk alternative. But there’s just one problem: the animals are impossible to work with on set. It’s a true stroke of genius from the ad department.

Agency: Serviceplan Germany x Serviceplan Middle East
Post: Linus Brandes
Music: Denis Elmaci
This shows once again how less is more. MINI stands for an urban lifestyle with maximum experiences in a minimalistic space. They used what makes the brand timeless and unique, to create a feature communication built from the wings in MINI’s iconic logo and turned it into a versatile design to communicate the new features and assistants, as simplistic and iconic as the car itself. The brilliance is in the way this makes rather complex features easy to grasp, where before they may have been hard to understand.
Entries to The Immortal Awards are now open and Little Black Book members can make their submissions here today.
Entries into The Immortal Awards will be accepted until 10th September 2021. There will be no deadline extension. All entries must be made for a commissioning client, and must have first aired, broadcast, displayed, launched or published between 1st September 2020 and 31st August 2021.
Every member of LBB is entitled to up to five entries, depending on their membership tier. This year, Bronze members receive one entry, Silver members will receive two entries and Gold members will receive five entries. The full list of rules, including eligibility dates, can be found here.
If you’d like to enter the Immortal Awards but you’re not yet a member of LBB, sign up here today. If you’re already a member and would like to increase your number of entries, you can upgrade your membership here.