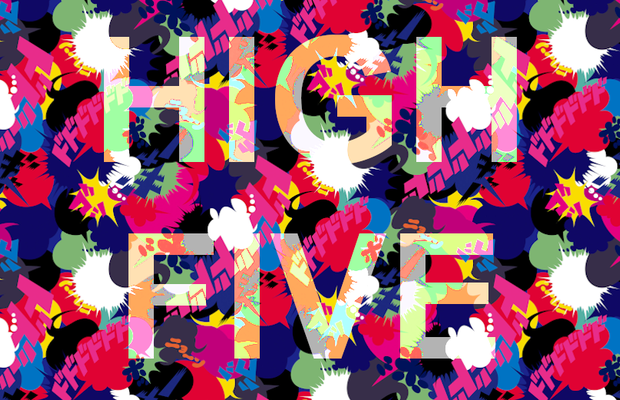 I’m Fantasista Utamaro and I’m a Japanese director, animator and designer at Nexus Studios. I chose these projects for my High Five selection because I wanted to spotlight the rich and diverse work being made in Japan right now. There are so many creatives pushing the boundaries of art, blending old and new, and using our history to innovate. My own personal work has always been about bringing Japanese culture to the global field too, and I think that the projects I selected do that well.

Production: STROBOWRITES
Creative Direction: Concept Conception* Inc
Director: Fantasista Utamaro
I directed this trailer for Netflix’s Anime Programme 2021. The chaotic art direction is an expression of the fact that Japanese anime is expanding infinitely and worldwide at a rapid rate. I wanted to convey the concept of anime hitting a sort of ‘mega peak’, highlighting how much it’s increased year after year. I also saw this as an expression of the underlying power of Japanese subculture. These dual meanings were very present in my mind while I created the piece, and in some way, the film is also an expression of the flexibility of Japanese people, who have historically believed in eight million gods in the Shinto religion, but have evolved into using modern techniques.

Director: Yusuke Shigeta
The 17th century legendary artwork about 'The Battle of Sekigahara' is reinterpreted by Yusuke Shigeta who is a contemporary video artist. It’s incredible to find over 500 animated characters with beautiful backgrounds in this pixel art animation. I think this video installation expressed the context of Japanese culture from old to new so beautifully. I selected this one because I wanted to revive the beauty and vigour of traditional Japanese folding screen art using modern techniques, and I want people all over the world to know about them. We can assume that the role of painting in an era without photographic technology was influenced by maps and manuals in that era, but through animating them with modern techniques, we can see the meaning and events that paintings intended to convey in a totally new way. I also selected this work because of the relationship of pixel art and traditional gaming graphics, which can be said to have originated in Japan. This is yet another example of a project that contextualises the value of Japanese culture.

Director: Sou Ootsuki
Pixel Art Director: Motocross Saito (UPC)
Animation: Yosuke Tani
This precise pixel animation is directed by Sou Ootsuki, who is an exceptionally talented video artist. He has directed a lot of awesome and unique style animation films for over 20 years and has been leading the pixel art scene for the past few years. Each and every one of the animation frames has the quality of still art. All of these paintings are hand-drawn by pixel artists and animators using Photoshop. In the past, because pixel games had to limit the number of colours in order to limit the data size, gradation had to be expressed with a small number of colours, and I think this film perfectly expresses the labour former game designers went through to create their works.

Production: AOI Pro. x CAVIAR
Director: Takumi Shiga
This animation was for a commercial film for a popular Japanese nutritional energy bar, directed by Takumi Shiga from CAVIAR. The various style animations are merged into an amazing animated film. I chose this work because of its complexity. It's a good example of a piece that uses many different styles of animation, which perfectly matches the wide variety of styles and diversity of Japanese culture itself.

Production: Mimoid
Director: Ryoji Yamada
This beautiful animated film is from the super talented director, Ryoji Yamada, with his film studio, Mimoid. Mimoid is made up of super talented young creators. Their work is very recognisable to me - you can easily identify they’re behind a project because their style is so unique. In Japan, there’s an underground scene of amazing up-and-coming millennial artists that resembles traditional Japanese creators. This piece allows us to discover various expressions from a wide variety of angles on a two-dimensional screen. I can’t imagine anyone would be untouched by this work, which is full of texture, craftsmanship and Japanese aesthetics.

The Art and Evolution of Anime