Rayyan Aoun, executive creative director at Wunderman Thompson in Saudi Arabia, focuses on responsibility and the power of change in today's High Five 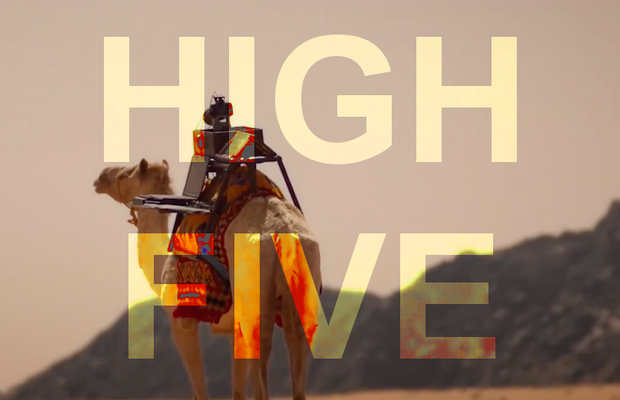 When asked by LBB to pick the top five regional pieces of work, my selections went straight to purpose-led ideas that are rooted in authenticity and relevance. I believe that the best brands and agencies have the responsibility to do work that centres around people, social change and the future of our world. And these campaigns perfectly exemplify that spirit...

Agency: Wunderman Thompson KSA
I would like to introduce you to Sarha - the first-ever content-creating camel, which puts stc’s network to the ultimate test while it unveils to the world beautiful landscapes from unseen lands of the Kingdom. Saudi Arabia is a country that has vast deserts, with nearly half of it still uninhabited and unreachable by most. Except, that is, for the desert camel; the only being that can easily get there. In an effort to showcase the power of its network first-hand, stc installed a dedicated hi-tech camera rig system on Sarha’s hump, allowing photographers from around the world to connect remotely to the camel and travel with Sarha on a journey of discovery while it roams around, taking epic and never seen before photos of the Kingdom. You can check those photos along with some interesting data on Instagram. Enjoy!

Agency: Geometry
Seconds into watching this campaign by Twitter, as an Arabic speaker, it had already resonated with me. You see, in Arabic, verbs and adjectives have both masculine and feminine forms. However, masculine forms are predominantly used to address mixed audiences and are the default in most texts. Twitter is changing that by introducing a new language setting that allows women to be addressed as female. It’s quite a clever move, given that the region - and Saudi Arabia in specific - is among the top consumers of the platform, with women constituting half of its population. Twitter’s #FeminineArabic diversity drive finally does what was needed to be done by a social media company. It gave women a voice, addressed them the way they needed to be addressed and highlighted the importance of being inclusive. I am hoping for other social media platforms would follow.

IKEA - 'It's What Nature Would Do If Nature Were You'

Agency: Memac Ogilvy
This one was...pretty cool. So, more and more brands have adopted sustainability as a core strategic pillar. Among these brands is IKEA. And it does so by continuously offering a wide range of sustainable and affordable products. To promote that range and raise awareness about the various environmental challenges that facing our planet, it launched a fun and entertaining film on Earth Day. This well-produced cinematic film tells the story of a regular family where the mother is a polar bear. You read that right. The mother is a charming and eco-conscious polar bear that is on a quest to show her family how to live in a way that does not harm the environment. Throughout the film, mama bear constantly encourages her family to make changes to their daily habits and live more sustainably.

Adidas - 'Beyond the Surface'

Agency: Havas Middle East
'Sport belongs to all'. Driven by that belief, Adidas has launched what I believe to be one of the best initiatives this year: a full-cover swimwear collection that women need, especially Middle Eastern women. To this day, many women aren’t comfortable wearing a swimsuit at public beaches and pools due to body shaming and lack of privacy. By launching its first full-cover swimwear collection as a new addition to its bigger movement of change, Adidas is diversifying its product offering to ensure all bodies have access to performance wear for the water. With powerful words and a moving film, the campaign celebrates the power of water and its ability to accept everyone unconditionally. Today, through creativity and innovation, Adidas is removing the barriers that prevent women from enjoying one of the most popular sports in the world.

Agency: MullenLowe MENA
It has been a challenge and a topic of debate for years in the Arab world: food waste...especially during Ramadan. It is a widespread issue that goes against the very spirit of the holy month; a time for moderation. This year, Pizza2Go and Red Crescent chose to tackle the problem head-on by removing a quarter of the pizza and its box that contribute to the waste. No easy feat, I'm sure, given they had to adjust their production line. With this, not only were they able to raise awareness on the subject matter, but more importantly, 25% of the original pizza cost was donated to people in need.