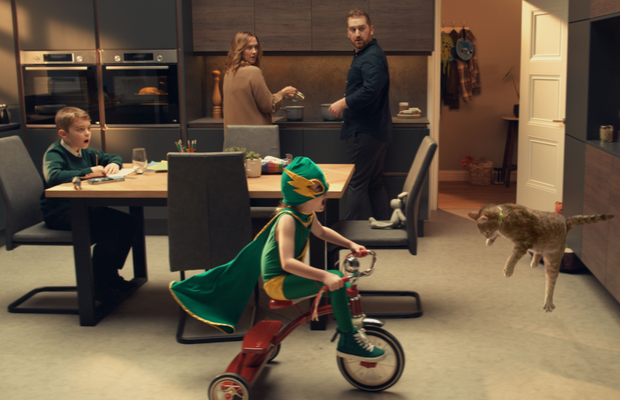 Home and garden expert Homebase has launched its latest campaign built around the theme ‘Dream Kitchens Made Real’ that will support its new kitchen ranges.

The campaign celebrates the kitchen being at the heart of the home and its multiple uses. This is especially pertinent during this unprecedented year when people have spent much more time at home.

By showcasing a series of everyday yet unique events that happen in households, it aims to encourage customers to be inspired to create a kitchen of their dreams that’s suited to their family’s needs.

It starts with a new TV commercial called ‘The Street’. The 60-second advert stylishly portrays the wonderful, diverse, and sometimes chaotic moments that are enjoyed in our kitchens.

It opens on a busy kitchen where a little girl innocently rides her tricycle at full speed towards her pet cat, as the rest of the family look on terrified. The action then continues as the camera passes along the street revealing different situations occurring in the kitchens.

Lisa Tickle, head of marketing at Homebase, says: “This campaign is a great way to kick off the new year and reflects how central the kitchen is to any home. With this new campaign we hope it inspires customers and lets them know that creating their own dream kitchen doesn’t mean compromising on the magical, real life family moments.”

The TV commercial was developed by creative agency, Atomic London and written by Dave Henderson, Guy Bradbury, Matt and Simon Welch and directed by Andrew Gaynord from Mindseye.

It was created using a special high-speed camera technique that’s more usually seen in televised global sporting events. The camera travels at such high speeds, so the actors have less than a second to get their expressions across during filming, giving the film a unique look.

Dave Henderson, creative director, Atomic, says:  “We wanted to show the joy and unique moments that make our homes what they are. Homebase has a fantastic range of kitchens and we wanted to celebrate those moments by showing the people and families that use those kitchens every day.”

‘The Street’ launches on Boxing Day (26 December 2020) and will run across all mainstream media throughout January and February 2021 and will be supported online and in-store.