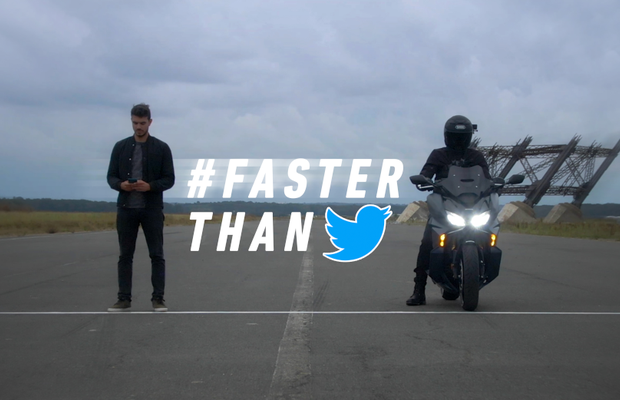 2020. December 20th, Honda Motorcycle reveal his megascooter, the new Forza 750, with the ambition to tickle the leader of the market.

To prove its superiority, the brand of the 'Power of Dreams' was not going to settle for simple comparative advertising.

With its agency DDB Paris, Honda chose to demonstrate the power of its ultimate GT scooter Forza by pitting it against a giant, which has no less than 326 million monthly users around the world, and 12.8 million in France. A symbol of instantaneity, speed: a Tweet

The Forza 750 is on the starting line.

The starting signal is launched for 100 meters from a standing start.

At the same moment, the scooter starts with a bang, while the tweet is sent.

The next morning, at 9:00 am, Honda provide video evidence on Twitter, to spread the news and send few consolation 'kisses' to those who need them.

Because it's now official: the Forza 750 is the only scooter to be faster than Twitter.

Thinking in Sound: Seeing It All Come Together with Gary Turnbull