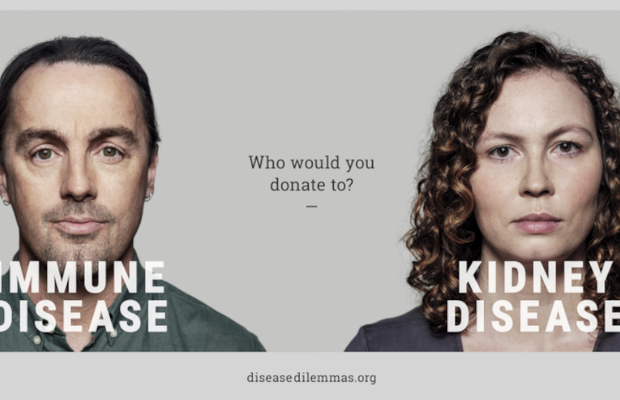 Earlier this month, three years after the inception of the project, BWM Dentsu and the Garvan Institute of Medical Research in Australia released Disease Dilemmas. The idea behind the project was to highlight the often-uncomfortable position of those who want to make donations, when they are forced to choose between a number of deserving charities but without the funds to give to all.
Thus, Disease Dilemmas was born as a series of short clips featuring real people with real illnesses to highlight how a donation to Garvan and their research into genomics can help them all. From brain cancer to kidney disease and multiple sclerosis, the real heroes of the project are the 12-strong cast who share their story so openly and with resilience.
LBB’s Natasha Patel speaks to BWM Dentsu’s creative directors Oskar Westerdal and Jon Foye and executive producer of broadcast Margot Fitzpatrick about the project and why now, despite a global pandemic, was the perfect time to launch Disease Dilemmas.

LBB> What was the initial brief for this project?

Oskar> Garvan specialise in genomics, and their research has revealed causes and treatments for countless devastating diseases – from diabetes and osteoporosis, to MS and cancer. But despite amazing credentials and achievements, people don’t really know who Garvan are, or what they do. And with literally thousands of other disease-related charities competing for public donations, we needed an idea that would stand out and make people choose Garvan.
Jon> It’s not often you get approached to come up with a bold idea for an organisation that’s doing truly ground-breaking, lifesaving work. This brief was a gift, and we never stopped treating it as such.

LBB> The team initially started working on the project in 2018 but casting took a while to finalise, however why did now feel like the right time to launch it?

Oskar> We were actually ready to go to market by the end of 2019, but it didn’t feel right to launch a fundraising campaign like this in Australia, mid-bushfires. Then 2020 happened, and it seemed like the only disease people had capacity to even think about was Covid. So, we waited. And in the end the wait turned out to be a blessing. Now more than ever, people understand the importance of medical research – and terms like “genomic sequencing” are on the news almost daily. In retrospect, we couldn’t have asked for a better time to tell Garvan’s story.

LBB> There are so many incredible stories, what was the casting process like?

Margot> Firstly, we prepared a potential list of various diseases and cancers that best reflected the areas of research that Garvan are currently involved with. We then spent at least six months with our clients, tapping into Garvan’s connections with potential ‘heroes’ within the institute and through various disease support networks, looking for volunteers who were willing to share their personal journey. Once we had our core set of heroes, we engaged a casting director to help fill in spots we felt had not been covered. Nat from Citizen Jane Casting has some fantastic researchers who were able to uncover some amazing people with a genuine connection to Garvan and the work that they do.

LBB> How did you go about scripting this considering that the stories are all so 'real'.

Jon> Working with real people we had to be smart about how we told their story. For our TV spots it was relatively straightforward – essentially each person introducing themselves and their disease to camera. But for long form content we needed a different approach.
Oskar> We really wanted people to focus on our heroes’ eyes. Working with our director Simon Harsent, we had the idea of overlaying interview audio on top of moving portraits. So instead of scripts we developed a series of questions that we hoped would give us some powerful responses. You’d be amazed how much material can come from a simple question like ““What’s a good day/bad day for you?”. The end result is quite powerful – our heroes simply looking straight to camera, holding your gaze while you listen to their story.

LBB> When you had the cast and script fully together, what was the production process like?

Jon> It really was a journey of discovery – much more like a documentary than your typical advertising production where everything is planned out. No actors, no agendas. Just real stories told by real people. Our job was to create a safe space where our heroes felt comfortable opening up and just be themselves.
Oskar> It was the most zen shoot I’ve ever been to. Nothing but calm voices, patience and genuine care for each and every person on set. It was quite emotional for everyone, I don’t think there was a single crew member who didn’t shed a quiet tear at some point. 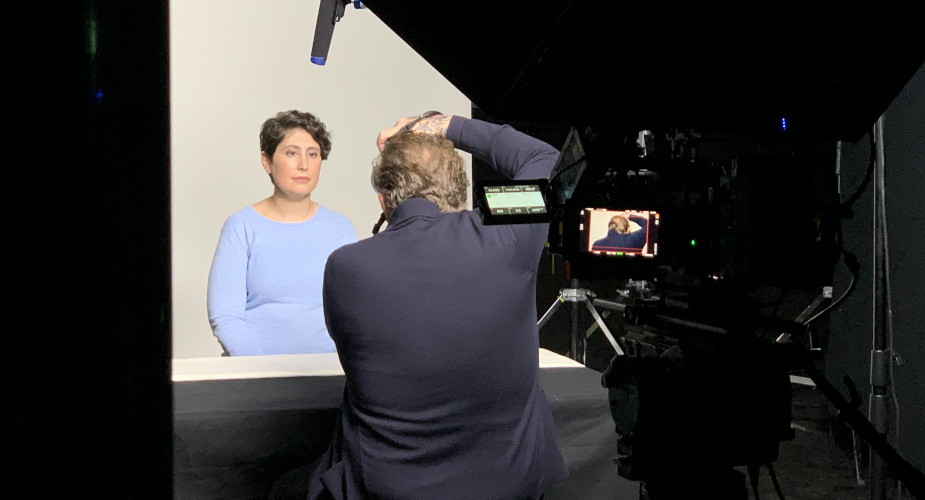 LBB> Creating a film like this requires a lot of sensitivity so from a creative perspective. What were the do's and don'ts?

Margot> Overall we kept it to a small crew of essential people every step of the way. We involved Simon, our director, very early on so that he was across all aspects of the production. Simon conducted the early interviews with each hero and was able to establish a connection and a trust with each of them prior to filming.
Jon> The idea is all about creating a moral dilemma in the audience’s mind, so from a creative POV it was important to give our heroes a neutral canvas that doesn’t try to sway you either way. The art direction had to be subtle, always in the service of showing our heroes just as they are.

LBB> What was it like working with Simon Harsent and the Pool Collective?

Jon> Simon is a wonderfully sensitive, brilliant director. His photography and portraiture is amazing and it’s why he was our number one choice from the start. We were thrilled when he accepted the challenge to work on this, especially given his team were working pro-bono.

LBB> What challenges did you face with the project?

Margot> Firstly, the health and wellbeing of everyone was a priority. The set had to a be tight, calm unit. We are all very collaborative so that made it easy and the teamwork was seamless. We were blessed with a wonderful group of professionals in every aspect of production and everyone was respectful of the sensitive nature of what we were doing.
Oskar> From a creative point of view, restraint was really important. We had hours and hours of incredible material, and in the end, we only used a fraction of it. There were also a lot of technical challenges with making background tones blend seamlessly, balancing eye line and overall proportions…. Finding the right visual balance, messaging, design hierarchy, sound etc. was a big challenge.

LBB> Medical research has always been so important, but thanks to Covid it is even more relevant today, so what takeaways would you like the audience to have from the film?

Margot> I think it’s for people, young and old to realise that you cannot go through life without being touched personally by one or more disease or cancer, whether it’s your parents, grandparents, partner, best friend or work colleague. We are all vulnerable and it’s so important to find a way to help. By supporting Garvan’s genomics research and their ground-breaking discoveries, you can help them all.
Jon> We have noticed, just in the time that we’ve been working on this campaign, that there have been scientific breakthroughs for osteoporosis, triple negative breast cancer, pancreatic cancer and the treatment of dementia. So the hope is real and it is possible that cures for certain diseases will happen in our lifetime.

LBB> What stood out to you the most from creating this?

Margot> The resilience of all the heroes, their positivity and their messages of hope for the future.
Jon> Agreed. someone tells you “I might be in a chair, but it doesn’t really matter. At least I’m still alive.” it really puts things in perspective. 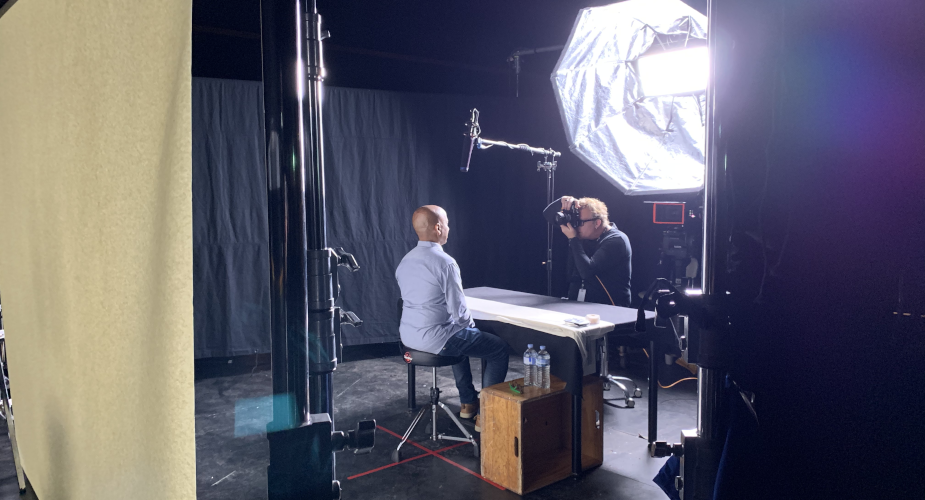 LBB> The music is really haunting throughout, what was it like choosing a sound to accompany the story?

Oskar> We wanted the audience to feel unsettled by the choice in front of them and luckily found a track early on in editing with just the right unnerving quality. Musically, it feels like there’s something intangible and sinister lurking underneath the surface, just like disease can hide inside our own DNA. With a slight change, the track goes from unnerving to hopeful.

LBB> We’ve seen the films and the OOH – where will Disease Dilemmas’appear next?

Oskar> In addition to TV, cinema, radio and outdoor, the mass of media placements – secured through Dentsu media and our generous partners – will allow us to physically impose disease dilemmas in busy public spaces, train stations and even at one of Australia’s most iconic sports stadiums. It will be big, it will be confronting – and hopefully it will help raise a ton of funding for Garvan. We can’t wait to see it.