How Do Japanese People Really Feel About the Coronavirus Pandemic? 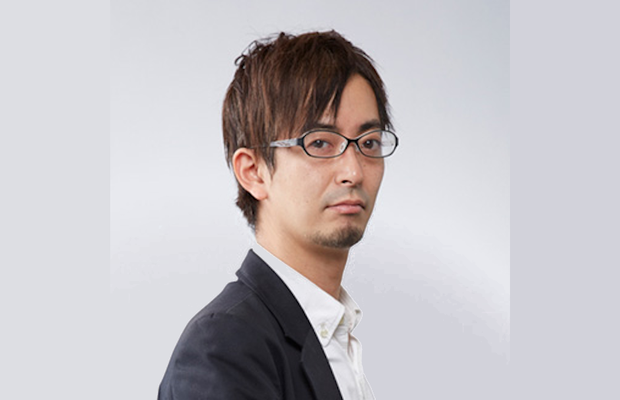 The coronavirus pandemic has become the world’s greatest crisis of the twenty-first century. Here in Japan, economic activity has stagnated due to the spread of infections, and ordinary people who drive the economy have been compelled to change their daily lives in unprecedented ways in order to adapt to the situation. Amid a flood of news reports from around the world, only a minority of which appeared credible, people in Japan started taking their own precautions when the government officially declared a state of emergency in April.

The world will not be able to return to the way things were before the coronavirus pandemic. For people in Japan, too, the impact of the pandemic is a reality that cannot be undone. While the national and regional governments are implementing countermeasures to deal with this impact, people want to know what companies and the private sector can do, as well. To explore those possibilities, Dentsu quickly initiated a project to survey people about the coronavirus outbreak and related countermeasures in Japan.

About Dentsu’s survey during the coronavirus outbreak

For Japanese people today, living under a state of emergency was an unprecedented experience. We wanted to know how people felt during that time and what concerns and hardships they experienced on a daily basis. Nevertheless, people do not always remember such things accurately later on. Therefore, we designed a series of surveys to capture and digitally analyse the variations in what people thought and how they acted amid the constant news reports and changes in daily circumstances. We believed that the results of the survey could be very useful for identifying what companies can do for everyday people and consumers.

Dentsu’s project started immediately after Japan’s state of emergency was announced. We began by conducting four online surveys every 10 days starting on April 10th. A number of important events happened during that time, including the expansion of the state of emergency from seven prefectures to the entire country on April 16th, a stay-at-home order during the country’s five-day Golden Week spring holiday in May, and the extension of the state of emergency period to May 31st. Targeting a nationwide sample of 600 men and women between the ages of 20 and 79, the internet surveys were carried out on April 10th to 11th, April 20th to 21st, April 30th to May 1st, and May 8th to 9th. Instead of creating elaborately designed survey questions, we placed importance on quickly designing and implementing surveys that could capture the concerns of people and their communities at each point in time.

We examined how Japanese citizens changed their views and attitudes towards coronavirus and associated countermeasures by collecting survey responses about their lifestyles every 10 days. The surveys not only asked respondents about what aspects of their lives had changed or returned to normal as they adapted to the so-called 'new normal,' but also about how their concerns and expectations for the future had changed. Their efforts to adapt to coronavirus countermeasures were measured with 10 gradations divided into five stages. We were able to get a picture of how the respondents’ lifestyles had changed by examining the psychological impact of the situation as it affected their lives as well as their efforts to follow the stay-at-home directive and other restrictions. We also found out how the respondents viewed the future in the final survey conducted on May 8th following the spring holidays. 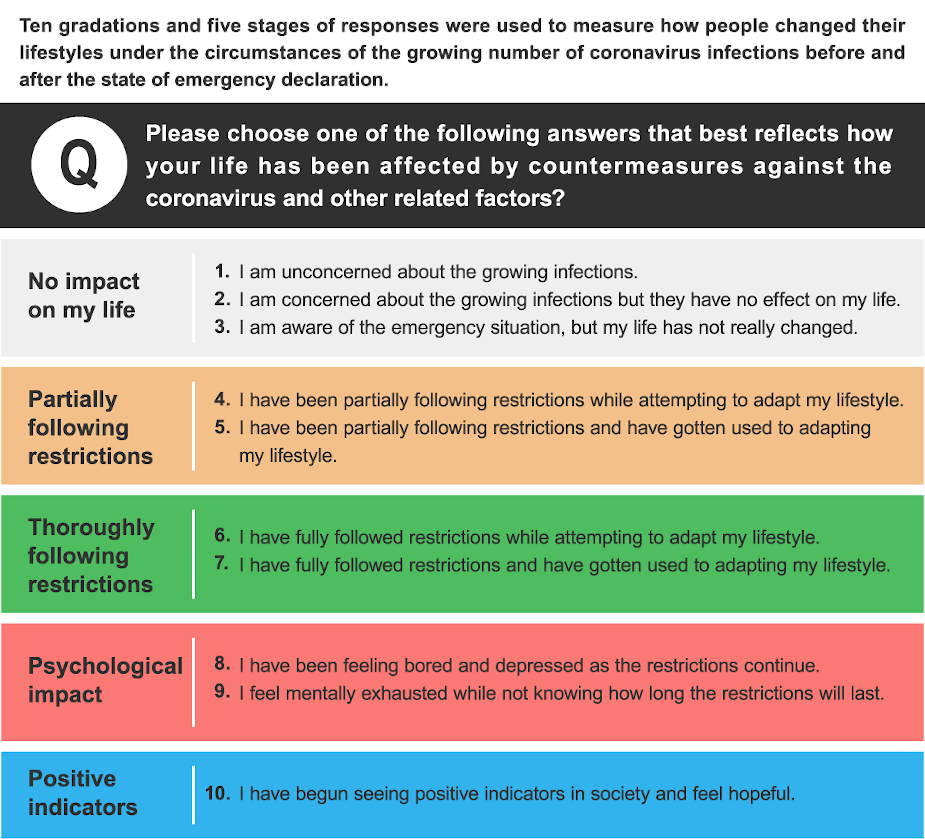 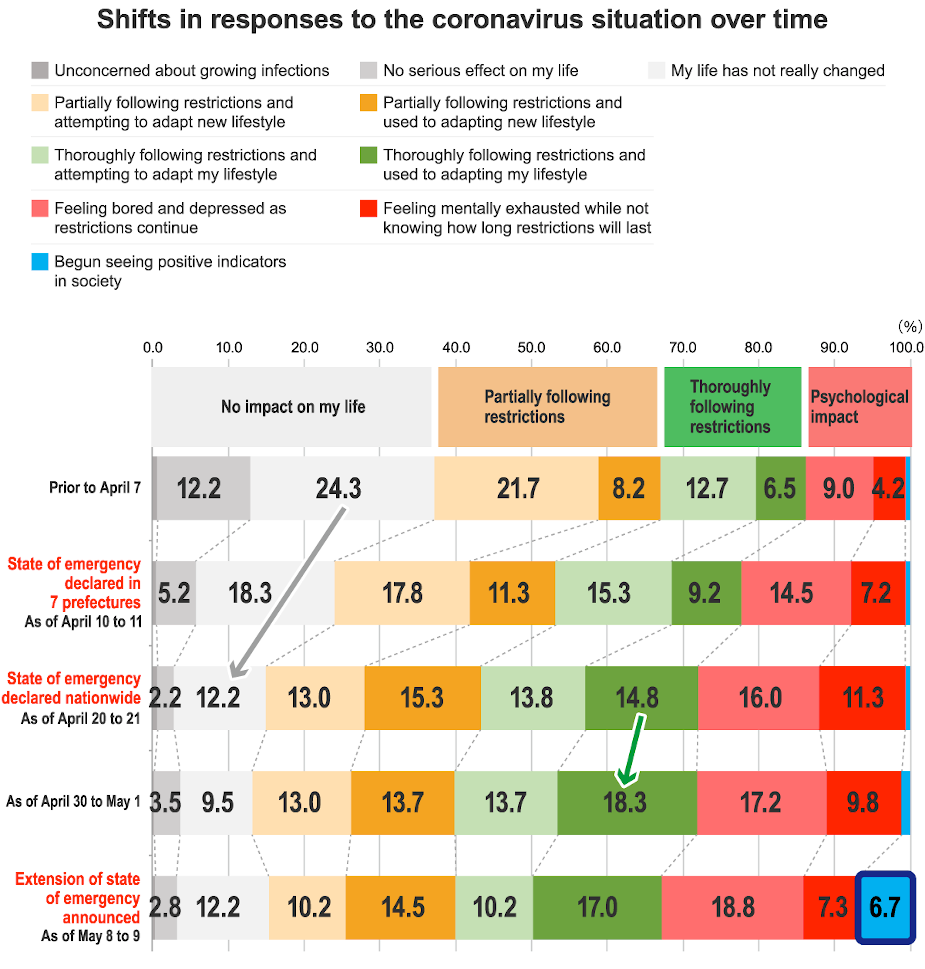 Suggestions, proposals, dissatisfaction, concerns and various viewpoints about how to cope with the coronavirus countermeasures and overcome related challenges are readily available from analyses by experts, comments on the news, and posts on social media. Indeed, we have a vast amount of qualitative information, including responses from ordinary people. Rather than collecting information about individual experiences, however, we wanted to acquire quantitative data from ordinary people that companies and organisations would need to take action and provide support. We also believed it would be better to obtain fresh responses from people to reflect how they really feel. With that in mind, we asked diverse types of questions in the surveys.

When our clients examined the survey results, many told us that they began releasing the seriousness of the pandemic after seeing various statistics about broader trends, and they hoped that quantitative data would continue being a basis for setting evaluation criteria because its usefulness. Among our findings, the issue that stood out most was the high percentage of respondents across all generations who experienced feelings of social uneasiness. In the April 30th survey, 92.5% of respondents reported having such feelings, with those between the ages of 20 and 39 indicating this most strongly. 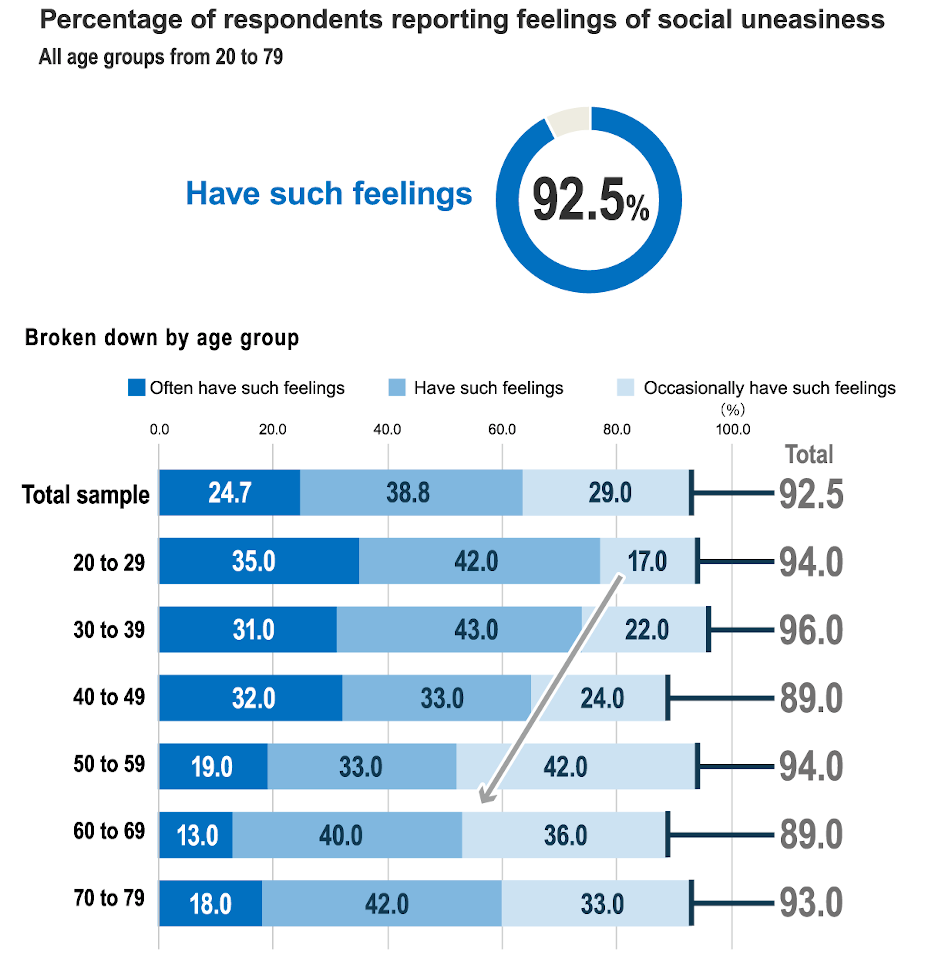 Encouraging survey respondents to share their private thoughts and opinions

I think the coronavirus pandemic is different than other problems confronting society in the past because many people feel anxious that they could be infected. For that reason, we included many open-ended questions in the surveys to obtain specific responses about what different people really think of the situation and what concerns they have. We asked respondents how they currently felt about the coronavirus outbreak, what they thought about the expansion and extension of the state of emergency, including how that affected their spring holidays, and what difficulties they were experiencing. We also asked how their values and behaviour would change after the outbreak is brought under control. Both qualitative and quantitative survey methods were used to obtain more in-depth responses to these questions. 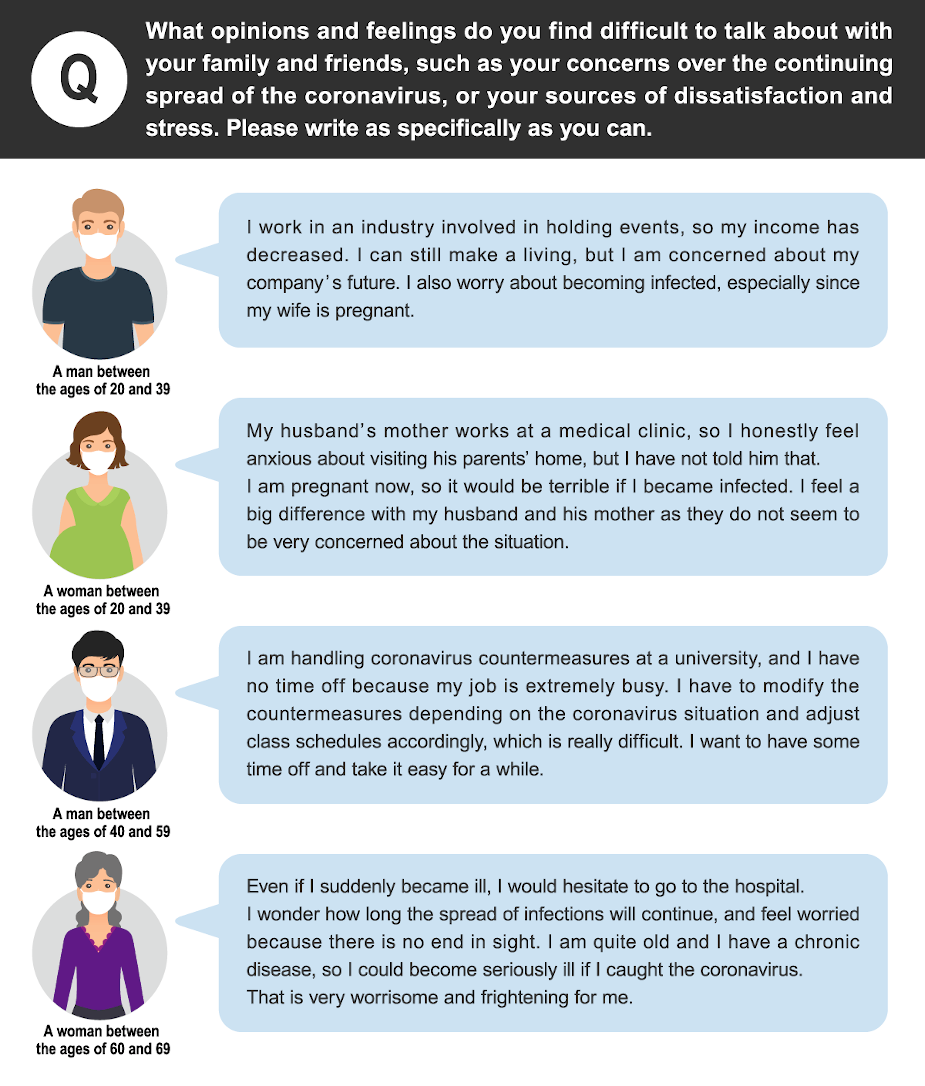 Results from Dentsu’s survey conducted on April 10th to 11th 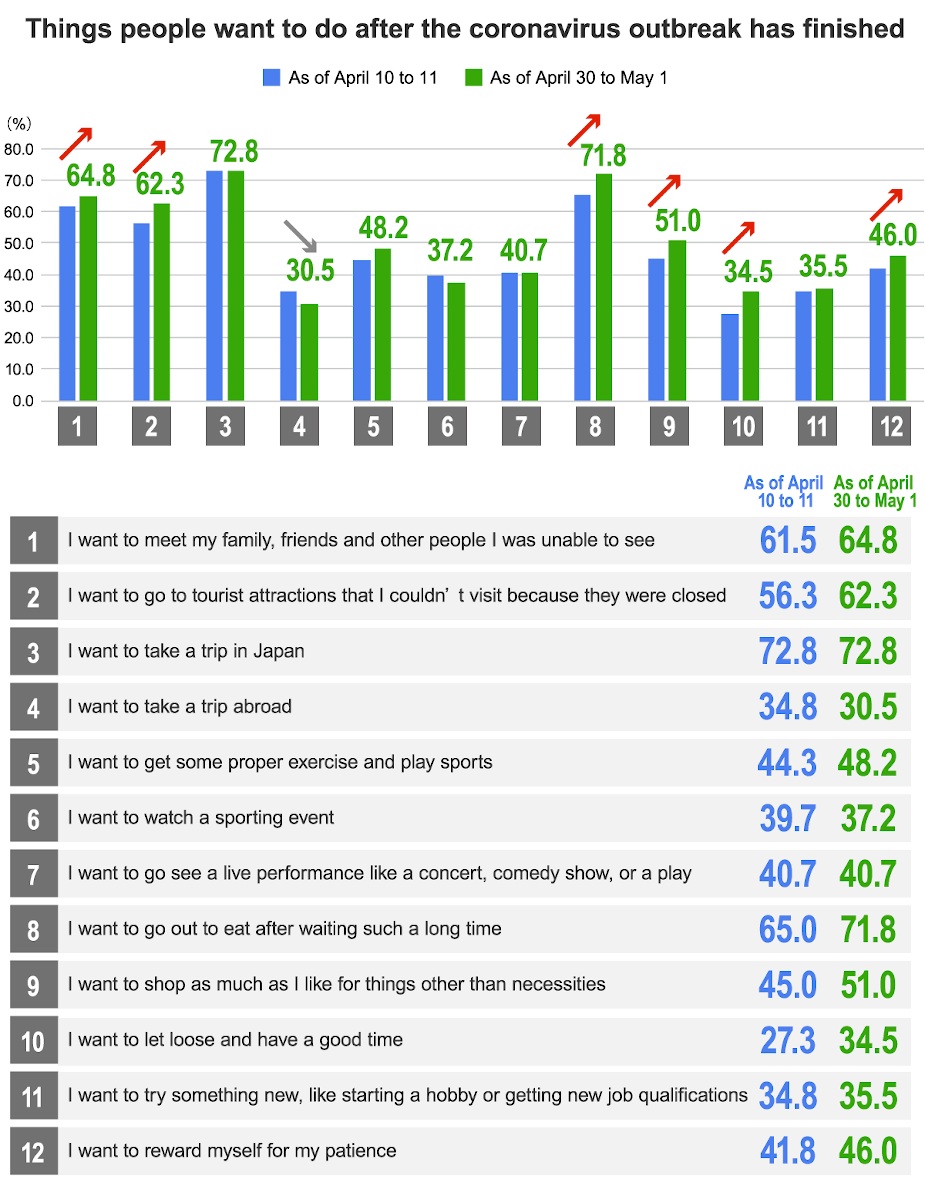 Among the survey questions, we asked respondents what they wanted to do after the coronavirus outbreak has been brought under control. Comparing results over a 20-day period between the April 10th and April 30th surveys, higher percentages of respondents expressed a desire to do things that were not possible under the state of emergency, like visiting tourist attractions, going out to eat, and shopping for things other than necessities, as well as meeting friends and going out to have a good time. With respect to travel, those wanting to take a trip in Japan remain unchanged at 72.8% of all respondents, while the percentage of those wanting to take a trip abroad decreased.

What people expect from companies

Little by little, a more positive mood in Japan has appeared as government directives on staying home were lifted. While hoping for improvements in the country’s medical system, people increasingly looked forward to an economic recovery, particularly in the restaurant and tourism industries. 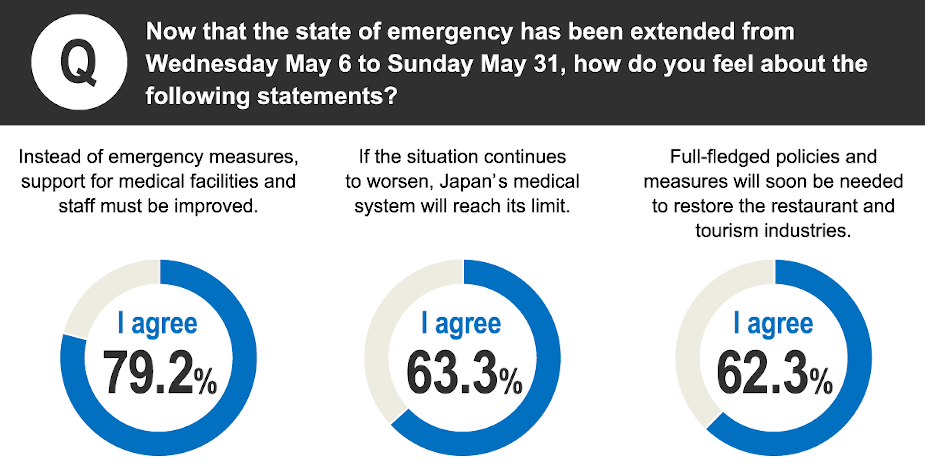 Results from Dentsu’s survey conducted on May 8th – 9th

While people receive support from essential workers in the healthcare sector and from national and local government organisations, I believe that businesses and leading companies should contribute as well. In our May 8th survey, 85.2% or respondents agreed with the statement, “not only government measures but also corporate initiatives are essential for revitalising communities.” Through our series of surveys, I really believe that the stance of companies—not only what they say but also what they can do and actually pursue—in response to the coronavirus pandemic and its aftermath will inspire ordinary people and consumers, and could also be a cornerstone for corporate growth in the medium and long terms.

Japan’s society and economy are expected to gradually start moving again towards the new normal, but the hardships, distress, and new lifestyles experienced during the coronavirus pandemic will not be forgotten. This sentiment was reflected in the May 8th survey, in which 78.5% or respondents agreed with the statement that “the current circumstances should be treated as an opportunity for reviewing how people live and work.”

People have very high expectations for corporate initiatives that 'build back better.' Under the current circumstances, especially, companies need to consider what needs to be done and what they can do. I hope that the findings of our survey project will be useful for that purpose.

Outline of Survey during the Coronavirus Outbreak

"Comfortable Ideas Get in the Way": The Radical Simplicity and Subjectivity of Yoshihiro Yagi’s Design

Dentsu Wins Grand Prix for Design at the Clio Awards