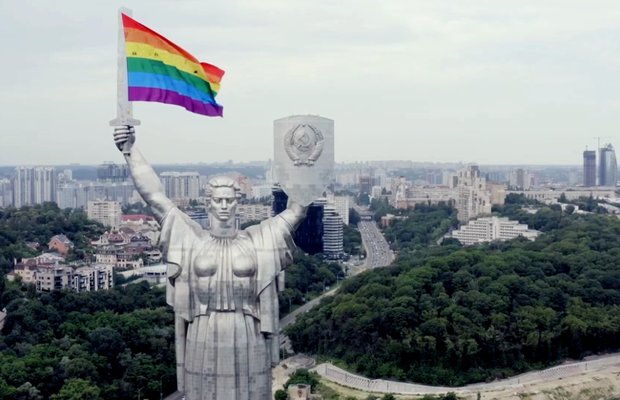 Decades of Soviet rule still cast a shadow over countries like Ukraine, a country with some of the highest levels of homophobia in Europe. In that context, KyivPride is a particularly vital activist event, where thousands of people gather to support human rights and stand up to intolerance (as well as those who oppose those rights). During a pandemic, when all public events were cancelled in 2020, the traditional event and symbol of equality for thousands was in danger. Online activism often involves only LGBTQ+ activists, while offline Pride events are a moment of visibility for a wide audience.
In response, the team at Saatchi & Saatchi Ukraine used drones, a huge flag and the Motherland Monument in Kyiv to make Pride the most visible event in the media. The Motherland Monument in Kyiv is a symbol of Victory and Protection and was constructed in the 20th century, during Soviet Union times. With the help of drones the team attached a huge rainbow flag to its sword.
The event immediately became popular in social media, then TV channels and famous politicians started to support and to criticize the event. The buzz around the topic was huge, even getting out of Ukraine and reaching European and Russian media.
Almost a year on from the stunt, LBB’s Alex Reeves spoke to creative director Kosta Schneider about how they made it happen and what impact the event made on Ukrainian society.

LBB> What was the initial challenge that you had to overcome for Kyiv Pride before you had this idea?

Kosta> Pride events do not have a long history in Ukraine. Covid-19 made it even more difficult in 2020. All Pride events were cancelled and switched to online. This reduced the audience dramatically, as online involves only LGBTQ+ activists. Offline Pride events have the element of show, festival, carnival, openness and unity leading to positive change for the future. They are a moment of visibility for a wider audience. It’s true that if you cannot be seen, you cannot be heard.
Kyiv Pride had a difficult task - during a pandemic they needed a campaign in digital to include this show offline element. So that would make the event visible across the country.

LBB> For those of us outside of Ukraine, can you please tell us about the history of the Motherland Monument and what it has represented to Ukrainians over the years?

Kosta> This monument was built in 1981, when Ukraine was a part of the Soviet Union (as the independent Ukraine appeared in 1991). First of all, the Motherland Monument is not only the tallest European statue, it is the statue with possibly the largest Soviet state emblem in the world on it. In April 2015, the parliament of Ukraine outlawed Soviet and Communist symbols in a decommunization attempt. But the symbol is still there. It’s very controversial. The Motherland Monument is the symbol of Victory and Protection - which in fact “protects” only inhuman Soviet values. F​or example, in the USSR there was criminal persecution of representatives of the LGBTQ+ community.
We turned the Monument into a symbol of gender equality and human rights protection. With our stunt, we set up the only relevant meaning to the monument - the Motherland should protect all her children.

Kosta> We would never get the official permission to hang a flag on the Motherland Monument. It’s just impossible in theory and if we would tell the authorities, the venture would definitely be interfered with. Also, the dimensions of the sword and flag are so huge that it is easy to cause damage to the monument. Therefore, we used a technological solution. We had only one chance to do this before the police could stop us. So, we needed careful preparation. The process was thrilling and exciting. We had a feeling of preparing for something huge.
We calculated and produced a flag of the required size and weight. With air radar we monitored the movement of the clouds in real time. Even light rain and increased humidity could make the flag too heavy, and we could lose control of the drone. It was necessary to monitor the strength and direction of the wind in order to adjust the position of the drone with the flag, so that the flag was “fixed” near the sword. The second drone introduced a live stream of the event.

LBB> How did people respond to it, both positively and negatively?

Kosta> Let me tell you that all offline Pride events resonate very well in Ukrainian society. There are those who support the movement for rights and those radical representatives who show intolerance and aggressiveness.
If we’re talking more about our idea, to tell the truth it was quite a radical change of the symbolism of the monument. That is why it sharply resonated with society. Even at the high political level.
It showed that part of our society is still fighting with a totalitarian USSR inheritance of stereotypes. The Ukrainian cultural and social context was mostly formed over a long period of time in the totalitarian and traditionalist country. The Soviet Union formed intolerance and aggressiveness towards a lot of basic human rights topics and LGBTQ+ people’s inclusion too.
We received hard intolerance from Ukrainian pro-USSR politicians and media. All of them, like the pro-government media of one neighbouring country, showed a complete rejection of the project and everything related to LGBTQ+ people.
On the other hand, we noticed the reaction of understanding and acceptance from democratic institutions, government, media and all pro-western people.
Having these polar reactions helped the project and the topic go viral in social media. All distribution was 100% organic. And it got out of the Ukrainian borders, spreading globally. No paid media was involved.

LBB> As a result, how do you feel discourse has moved on in the country?

Kosta> This stunt drew a lot of attention to the topic. It was discussed by the whole country and not a single person - from politicians to stand-up comedians, from sofa experts to activists - failed to express their opinion. And opinions were quite polarised, so the discourse reached a new level.
Since the Monument is connected with the Second World War, the struggle against Nazism and the totalitarian regime, the topic of human rights was as relevant as possible. This was a major change in discourse, to my mind.

LBB> Compared to when you took on the brief, can you demonstrate anything that has changed as a result?

Kosta> This activism is important not even because of all of the above, but first of all, because it has become a part of pop culture. A symbol of freedom for Ukraine.
Even today the image of the monument with a rainbow flag continues to multiply in memes, posters, illustrations, murals, tattoos, postcards etc. It became a part of a social media culture.
We can’t say that all intolerant people became tolerant the next morning. It’s a long process. I’m sure it will take years to move the discourse, I hope not dozens of years. Therefore, the impact of this stunt on society continues and cannot be underestimated.

Kosta> We’ll hope it will be offline and more crowded than ever before.