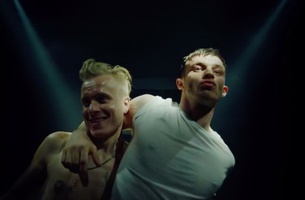 Born and raised in Bavaria, Soup Films director Marco Kreuzpaintner eventually moved north to his country's capital, Berlin, where he spent 12 years. Over those 12 years the city became more and more internationally famous for its never-ending nightlife, progressive approach to politics and general anything-goes attitude. But after retreating back to the Bavrian countryside, Marco asked himself the question of why something so internationally renowned had never been explored further in entertainment. And, given a blank card opportunity from Warner Bros to make a show about whatever he wanted, he created Beat, a crime drama set within Berlin's club world that launched on Amazon Prime Video.
LBB's Addison Capper caught up with Marco to talk partying and capturing its unique essence on film.
LBB> How did this project come about? I read that Warner Bros gave you the opportunity to create a show about whatever you wanted?!
Marco> After 12 years in Berlin, I moved back to the Bavarian countryside. Sometimes from a more distant point of view, one sees things more clearly. And so I thought, why was there never a show made about what Berlin became really known for in the last decade: its club life. And yes, Warners gave me carte blanche, and I am still very thankful for it.
LBB> So, what was it about the Berlin club scene that made you want to focus on that? And why a crime drama centred around that? What can you tell us about the storyline and its inspiration?
Marco> The club scene is the perfect backdrop for various myths and storylines. But it's not a plot yet. The crime plot is basically a tool to be able to focus on that scene. It keeps the story going, while the characters are what always interests the most.
LBB> You lived in Berlin for 12 years - how much of the story is drawn from your personal experiences during that? Are there any specifics you can tell us about?
Marco> I was never a hardcore clubber, but partied quite a lot in my Berlin years. But I was always aware that my real passion was making films and I never wanted to allow this to be challenged by losing myself in the nightlife. But in the moments where I was consciously enjoying nights at Berghain and other clubs were like a trip into other worlds.
Characters like Beat, Paul or the bar keeper Nani are almost direct copies of some of the friends that I made during that time.
LBB> Berlin clubs are very private in that photos aren't allowed in the vast majority of them - I was wondering if this caused you any issues as a director? The scenes you are shooting are acted, but how did you ensure that the camera didn't infiltrate the shot too much, to keep them as authentic as possible?
Marco> The worst one could do as a director would be to stage club scenes 100%. You have to take risks, let go. We organised real parties, never interrupted the music, had the extras continue dancing to great tracks throughout the days and nights, and had the actors come into this surrounding. Their dialogues had to be dubbed later, but I didn't want the much more important atmosphere of these scenes to be challenged by dialogue recording issues.
LBB> And how did you go about reflecting the vibe of the clubs onto camera? How tricky was that?
Marco> It's all about the casting of the extras. We invested a lot of time casting real people from that scene, the fetish and erotic crowd was then the topping to that.
LBB> Jannis Niewöhner, who plays the main character Beat, said something that I really liked - "Berlin is the secret main character". What do you think he means by that and was that something you were conscious of when making the series?
Marco> Yes, it was the concept - Berlin, with its non-existing rules. A big playground in which you could lose yourself. I wanted Berlin to look as grey and dirty as it is, but colourful in the night. A huge melting pot without limits. The characters in it seem to be lost, but they are not aware. I purposely never showed landmarks such as the famous TV tower or the Gedächtniskirche (Kaiser Wilhelm Memorial Church). One should never be aware where the characters are.
LBB> Where did you shoot the club scenes? Was it mostly sets or did you have access to any clubs in the city?
Marco> We created the clubs in open spaces of old industrial buildings or used locations like Kraftwerk, Watergate and KitKat-Club.
LBB> What kind of reaction have you seen to the series?
Marco> One thing that stood out for the audiences was how realistic the club scenes were. There has also been some criticism from a few as to why someone should portrait this underground scene in a commercial entertainment series such as Beat. But I feel it is quite a normal development, underground scenes and topics become pop eventually.
LBB> How do you find the process of shooting in long form as opposed to your work in commercials? What do you enjoy about each process?
Marco> Beat is the consequence of long years working with Soup film on commercials. That is where I met the editor of my show, Johannes Hubrich, and the short concentrated form of storytelling is the perfect playground to invent new ways of editing, filming and telling a story in a more concise way. Beat is also a result of working with great CDs in the commercial world.
LBB> To round up - what was your favourite Berlin haunt when you lived there?
Marco> Berghain. It’s probably cliché to say, but: Berghain.