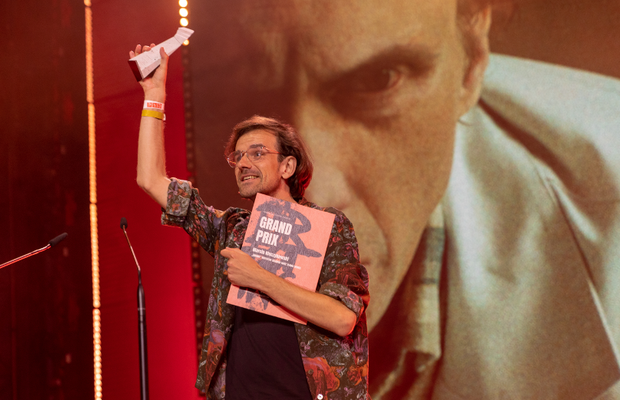 At the start of this month the eighth edition of Papaya Young Directors took place, not over a video feed but in real life, at a gala in Poland’s Sowiński Park, with the coverage of the gala streamed live in selected places in Poland and selected European cities.

The competition’s Grand Prix, as well as the award for the Best Film in the Music Stories category, was won by Marcin Kluczykowski for the video for 'Zabawa' (Fun) - a song by Krzysztofa Zalewskiego (Catz ‘N Dogz remix). In it, the director intertwines grotesque horror and comedy in an almost five-minute-long video.

As the jury commented: "This work, from explication to production, was the most conceptually coherent, required the least feedback, and in the end, it surprised us the most with its refined and thoughtful form in every cinematic element".

An additional Distinction - for editing this awarded music video - was awarded to Miron Kundzicz.

Impressed by the video that stormed the gala, LBB’s Alex Reeves caught up with Marcin.

LBB> Congratulations on winning the Grand Prix and Best Music Video in Papaya Young Directors 2021! What does it mean to you?

Marcin> Thank you! It's a great joy that the video for the song ‘Zabawa’ has been appreciated from among so many other proposals. My creative efforts so far have been connected with an emotional sinusoid - great faith in what I do and, at the same time, frequent struggles with uncertainty, anxiety. This award helps me gain self-confidence, adds strength, and motivates me. All the more so because it was awarded for a project in which I didn’t limit myself creatively. This makes me very happy.

LBB> What was your initial idea for the Zabawa video and how did that evolve into the final film?

Marcin> The remix of the song Zabawa is very fast and vivid and the lyrics are about life not being fun. I thought the most interesting thing here would be the use of contrast - putting action in a place that is associated with things that aren’t alive and gradually playing with that representation. We wanted to start quite calmly at the beginning, to mesmerise the viewer, and then to enter the crazy imagination of the main character. I wanted the viewer to feel a bit like him. I also wanted to play with the music video's formula and at the same time leave the presented story open to interpretation.

The script of the music video had changed during its production due to the impossibility of filming it in a real morgue. However, the lack of refrigerators and special drawers for the bodies motivated us to look for other visual and dramaturgic solutions that would attract and hold the viewer's attention.

LBB> What were the most important things to get right to make sure it had the right energy?

Marcin> Good preparation of everything before the set. Together with the cinematographer we established how many and what kind of shots we needed at any given moment in the music video. The pace of the editing we designed to depend on moments of intensification or calming in the music. We played around with fragments of musical repetitions, we looked for moments in the script I had written that could be commented on or enhanced by visual solutions (such as slowdowns or any camera movements). Therefore, the language of this music video evolves, changes, is close to the changing emotions of the main character.

Just before going on set I did a screening of our arrangements in my head - it was very similar to the final result. I remember I really liked it.

LBB> Creating a film within Papaya Young Directors competition means not having either a brand or music artist’s involvement at all. Both during the creative process and on set. How did you use this freedom?

Marcin> It was a very liberating experience. I know that usually directors of commercials or music videos don’t have that much freedom, so I decided not to restrain my imagination here. I focused on what I needed to tell the story and fully embrace the motives I drew on. It was also nice that the jury at the semi-finals stage of the competition only pushed me further in my difficult ideas, not limiting me creatively in any way.

LBB> What was the Papaya Young Directors experience like?

Marcin> It was a very fast, intense and experience-rich time. Thanks to this competition, I’ve met wonderful people with whom I hope I will continue to work with. I've always wanted to make music videos and this experience only confirmed that. I also admit that I was intimidated by the moment of the final gala. I felt incredibly appreciated! It was a good experience that will stay with me for a long time.

LBB> Miron Kundzicz also won a special mention for the editing on the video. What was the key to getting that right?

Marcin> I was very happy he received this! Even before the set, Mateusz Kucharski (the cinematographer) and I met with Miron to present him our ideas and planned visual solutions. We wanted to vary the editing and adjust its intensity to the changing pace of the music. Miron is a very warm, hard-working and creative person who can communicate wonderfully. He also works very quickly. We had a first cut of our video just after one day. Thanks to this we could also look for additional accents and nuances in the material, which went well with the music.

LBB> When and why did you decide you wanted to become a director?

Marcin> This dream was the result of my passion - watching movies. After countless screenings, including a few films that greatly influenced my own life, I thought: "I wish I could do the same!". At the same time, there has always been a need in me to creatively share my view of reality with others. At some point I discovered it’s the cinema that offers such opportunities - it gives the possibility to focus on what is individual, personal, sensitive, broadens the view of reality, builds empathy. It is also a great tool for communication and representation.

LBB> In your career to date, what have been the most important filmmaking lessons you've learned?

Marcin> That even in “auteur cinema” at every stage you need people, kind of "co-authors". I appreciate the role of consultations, which not only confront you with someone from the outside, but in fact allow you to get to know yourself, your tastes and preferences - if only through the strength you put into defending your own opinion. This of course also applies to the film set itself. It's a very demanding time, as the number of voices around and things to do can be paralysing. But it’s the necessity to make quick decisions, the possibility of mistakes and, above all, the increased exchange of energy between people that makes you a director.

LBB> You also work in theatre. What do you think your acting/directing experience in that field brings to your work on screen? And does it go the other way too?

Marcin> As I had the opportunity to work in theatres with very different aesthetics and approaches to the creative process, I think this influence is very broad and somewhat immeasurable. However, looking at my recent film work, it seems to me that I took from there the ability to find myself in limited conditions - in camera spaces, building drama around intimate moments. And flexibility in drawing on convention despite the initial creation of a realistic world - that is, an agreement to a certain conventionality. Besides, it gives me a lot of joy to work with actors. And for sure the years spent in the theatre have given me a lot here.

Recently I have been concentrating mainly on film projects. Last autumn, however, due to pandemic restrictions I had the opportunity to direct and record a stage reading of a theatre play. It was a very interesting juxtaposition, because while recording subsequent scenes I decided to use the camera not to record the events from the perspective of the viewer, but to react vividly to what was happening on the stage itself. I think I would really like to explore this combination of film and theatre again.

LBB> Where do you turn most often when you need inspiration?

Marcin> I have a lot of images, thoughts, impressions queuing up in my head! So these are themes taken from reality, but also filtered by what kind of person I am. I’m also inspired by literature. Besides, I have a special notebook, in which I write down my ideas and to which I often refer. These things are certainly important at the stage of writing the script. And when I start inviting people to the project, especially a cinematographer, I also share my visual inspirations - movies, theatre, painting. It's a wonderful moment when my specific ideas expand to include other people's suggestions.

Marcin> Above all, I dream of making full-length features. The kind that will be a creative challenge and which I, as a viewer, would also like to watch. I’d like to surprise myself creatively, but at the same time remember which type of cinema, which film language and which emotions are most important to me. And that is a challenge!