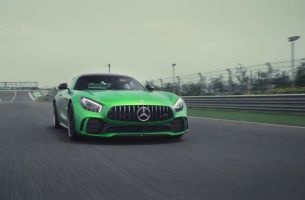 India’s car market is huge. Seriously huge. In 2016 it generated $35bn in sales revenue, making it the fifth largest in the world. By 2020, Suzuki expects it to leapfrog Germany and Japan to become the world’s third largest car market. The growth is driven by India’s rapidly booming middle class, whose tastes are also evolving.

This is enough to get local and international car brands drooling at the wheel – but marketing for a diverse, increasingly sophisticated and content-hungry audience is no small feat. Marketers are desperate for the prestige of international directors and, having shot every square inch of the country in the car ads and online content, there’s a growing appetite for shooting in exotic locations like South Africa, Southeast Asia and Central Europe. That’s why Indian production company QED Films and UK-headquartered international production company Bang TV have recently launched a joint venture, QED. Bang.

The need for such a specialist venture had been apparent to QED Films Executive Producer Arjun Mukherjee for some time. Before running QED, Arjun spent many years working in agencies – most recently J. Walter Thompson. While international directors were popular with clients, they tended to work in India on a freelance basis and didn’t always leave the best impression.

“I had a couple of bad experiences with international directors. Mainly because there would be agents in India each peddling five or six international directors. When they would come for the project they used to come, do the shoot, then go straight back to whatever country they belonged to. The Indian team would go about constructing the edit and the music and even for the final presentation, the director never used to be there. This became a pretty common thing and I had a couple of bad experiences,” says Arjun. “We believed that we should get into a JV where both the parties are equally invested, so it’s all about your reputation and how you handle the project. At the end of the day the client and the agency will be happy and proud of the final output.”

And so Arjun set out to find a partner who could bring a roster of international talent and provide a high level of oversight and support.

The prospect of a joint venture was equally appealing to Bang TV’s MD and Executive Producer, Jeremy McWilliams. He had always had fantastic experiences shooting in India but had been unable to find a local company that wanted to create a true partnership.

“Filming is a dream there, we’ve always wanted to get in there, but we hadn’t managed to find a proper partner because generally Indian companies like to keep to themselves and say ‘if you’ve got a project then let us know’,” said Jeremy. “And then we came across QED.”

The rest, as they say, is history.

They crafted a roster of specialist car directors who would appeal to the bombastic but evolving Indian market – including Brian Williams, Lino Russell, Marc Behtke, Laszlo Kadar, Jesse Harris and French duo Cokau.

The joint venture not only provides the Indian car market with sought-after international directors, but also allows them to more easily access a range of foreign locations. “What is happening is the type of location available in India has been mostly covered by most brands and agencies. There’s nothing new to show, so if there is a very big launch involved with very big budgets, that’s when they look at foreign locations,” says Arjun.

What’s particularly exciting for both Arjun and Jeremy is the variety of opportunity present in this growing and intrinsically diverse market. “The international brands are here and the model is essentially the same, it’s just that the Indian market is unique because it’s so diverse. It’s not one culture, it’s multiple cultures, multiple languages, and the demand and needs are very unique. I think lots of brands are realising they need to create content specifically for the Indian market,” explains Arjun.

And that diversity also means that brands need an insane volume of content. TV commercials are almost entirely produced as parts of national campaigns, but Arjun has noticed that, when it comes to content for social channels, work is a lot more targeted and tweaked for specific regions.

The joint venture is only a couple of months old but already they are getting traction from clients and projects are underway. Curiously enough, there’s even been interest from non-auto clients, suggesting that the hook up is really something the Indian market is hungry for. 2018 looks set to be a top gear year for QED. Bang.

Why Do We Like Ads That Make Us Cry?