How shelter.film Hand-Crafted the Perfect Summer Snapshot for Crown Royal 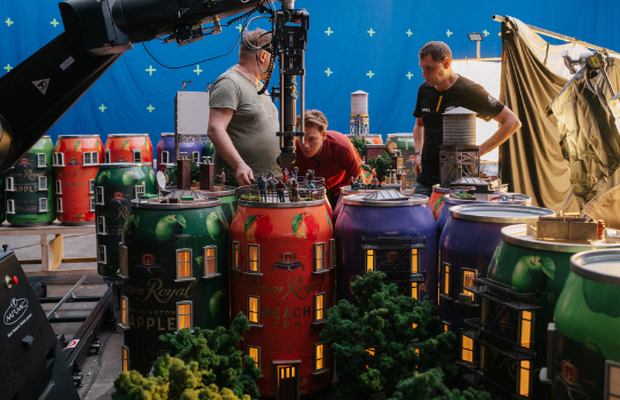 Sometimes, the best creative ideas can be dreamt up in a flash of inspiration. At other times, however, it can be an arduous labour of love when it comes to bringing unique and ambitious creative visions to life. There can be no doubt that Crown Royal’s latest eye-catching campaign - entitled simply ‘Cans’, falls into the latter category.

Happily, the production experts at shelter.film are no strangers to ambitious creative ideas. In this instance the team set about crafting - by hand - a town’s worth of scenery, inhabitants, and buildings for what can only be described as a beautifully unique film in support of the Canadian brand’s range of canned cocktails.

To go behind the scenes on the spot and find out how it all came to life, LBB spoke to shelter.film’s EP Albert Zurashvili alongside producer Yulia Foster.

Above: The beautifully made ‘Cans’ ad promotes Crown Royal’s range of canned cocktails.

LBB> First of all, congratulations on one of the coolest-looking ads we've seen in recent  times! How daunting was the brief, and did you always have confidence you could pull it off?

Albert> Needless to say, the project was definitely a challenging one. We had to literally create the entire set as a miniature 3D world!

But the idea seemed absolutely unique, so there was never any doubt that we wanted to be a part of it. Did we always have confidence we can pull it off? I’ll leave that for the audience to decide! What I can say for sure is that we're always ready to go all-in and make another outstanding project just like this one.

LBB> The ad welcomes us to a ‘new world’ of cocktails. How did you create that sense of a whole new world for viewers?

Yulia> The story is immersing viewers into a world of miniatures who are enjoying their drinks in  different places or situations. These include real and tangible scenarios like playing basketball, throwing a rooftop party, and having a picnic with friends. All these miniatures were custom made, we printed them in 3D and hand painted after. As a result, there’s an authenticity which helps it all feel ‘real’.

Albert> Casting was one of the most crucial parts of this project, and so it was one of the first things we started preparing. We were looking for the right characters all around the world, in Spain, LA, Ukraine, and beyond. Once the cast was approved we started scanning all the actors into different poses and locations, and it was only then that we could move on to producing the miniatures.

The last stage was painting. For this, we found great artists in Ukraine and Poland who did an amazing job. It was stunning to see how these little 3D miniatures look exactly the same as the real people who inspired them!

LBB> And on a technical level, what was the set-building process like?

Yulia> Set-building took about two weeks. The local art department crew had to build four sets and create huge cans about one metre high each. All of this work was curated by our in-house art director Misha Levchenko, who - as always - did a brilliant job. His team was working really hard to make every single detail of this world look natural and liveable.

Above: A selection of images showcasing the construction of the ad’s set.

LBB> What was the most difficult part of this project, and how did you overcome it?

Albert> The biggest challenge on this project was the technological part of filming the story in one take. The whole film was shot on motion control, so if we had to make any change in  camera movement the crew had to reprogram the system and start everything from scratch.

What really saved our time on set was the animatic that Paul [Geusebroek, director] and our local motion control crew developed before going into the shoot. They spent about a week working on it, creating every set detail and camera movement. That was invaluable.

LBB> If you had your time again, would you do anything differently? And if so, why?

Yulia> I wish we could have just one more shooting day - that’s the only thing which I wish was different! It was an amazing overall experience for all of us to work on such a special project like this one. We believe the film turned out to be really great, and we hope that people watching it feel the same.

Albert> Agreed. It couldn’t have been any better - we worked with our long-time friends Iconoclast & DP Menno Mans and met another new great friend, director Paul Geusebroek. It was a blast!

LBB> Finally, what’s your favourite memory from working on this project?

Yulia> There’s one little secret about this film that still makes me smile. We created a 3D  miniature of our art director Misha who you can see in the film. On set we had him standing  next to us, while his little version was having his moment on camera. It looked absolutely  crazy!

Gimme Shelter: How shelter.film Became a Home for Great Creativity

Behind The Work: Dua Lipa Reflects On Love in the "We're Good" Video, Featuring...Lobsters?

How shelter.film Took Gojek for a Spin in One of 2020’s Most Ambitious Ads