How Zalando is Challenging Dangerous Norms in Poland

Dawid Pożoga explains how the online fashion brand is taking a stand on things that matter more deeply than new clothes, in partnership with 180heartbeats + JUNG v. MATT 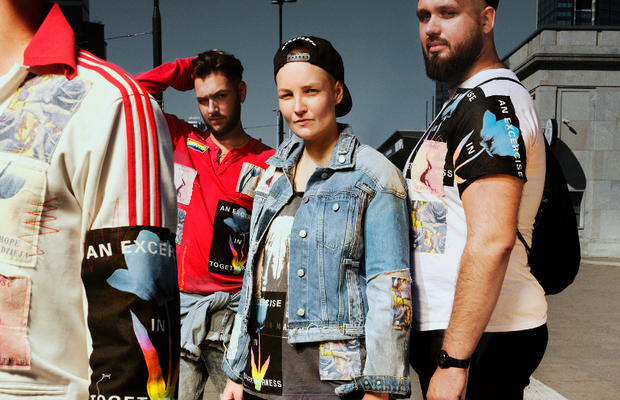 Zalando, the online fashion retailer, is at the start of an exciting journey in Poland, as it aligns itself on the responsible and compassionate side of societal issues.
Partnering with 180heartbeats + JUNG v. MATT, a Warsaw-based creative agency with a strong pedigree in cause-based work, Zalando Poland embarked on its first CSR campaign. ‘Clothes Reborn with Pride’ made a statement of solidarity with people in the LGBTQIA community at a time when homophobic sentiments were being widely propagated in the country, leading to an increase in homophobic attacks. Creating clothes made from garments destroyed by such attacks, the campaign took an empowering stand against hate.
At the same time, the brand has been working on its sustainability commitments, leading up to a campaign in Poland and Germany - on Valentine's Day promoting its new pre-owned service by suggesting people mend their broken hearts by selling their ex-partners’ left behind clothes.
With these two intriguing projects showing what direction Zalando is facing in Poland, LBB’s Alex Reeves caught up with Dawid Pożoga, the brand’s regional lead for Poland and the Czech Republic.

LBB> Where did your do.MORE sustainability strategy begin?

Dawid> The fashion and e-commerce industry, including our business, is contributing to the consumption of the Earth's resources at an unsustainable rate. With our determined actions, we wanted to become a part of the solution to this problem. Our bold vision to be a sustainable fashion platform with a positive impact both on people and the planet became the core of the company's operations. Guided by the three main areas: Planet, Products, and People, we have created the do.MORE sustainability strategy to transform not only Zalando but also the wider fashion industry.

LBB> Why is it important for Zalando?

Dawid> The fundamental challenges that we are facing right now - such as climate change - are the problem of all of us. Both individuals and global companies. We want to give back more to society and the environment than we take. That is why our do.MORE strategy, on which we base all our activities, is so important. In our efforts, we do not limit ourselves only to the product itself, but we stand by our corporate responsibility throughout the entire supply chain.

LBB> What are the major goals of the strategy?

Dawid> First of all, our science-based target was to reduce carbon emissions in line with the Paris Agreement, which we already did - since October 2019, our own business, all deliveries and returns have been carbon neutral. Secondly, by 2023 we want to generate 25% of our GMV (Gross Merchandise Volume) with more sustainable products and design our packaging to minimise waste, specifically by eliminating single-use plastics. Last but not least, also by 2023 we promise to work only with partners who align with our high ethical standards.

LBB> Specifically in Poland, what are the main challenges to that goal?

Dawid> The challenge is always the level of awareness of the customers. In Poland, this eco-awareness is growing, especially among young people, but it is still not enough. Therefore, the difficulty here is the lack of adequate education in the field of sustainability. Which - thanks to the companies like ours I hope - will become better.

LBB> How has this generally fed into your marketing strategy and work with 180heartbeats + JUNG v. MATT?

Dawid> If you want to be heard, you need to say something bold. We were looking for ideas that would be locally relevant and at the same time fresh and original. That is when we decided to partner with 180heartbeats + JUNG v. MATT, as we knew the agency delivers engaging communication and socially responsible ideas - you need only to mention ‘Unbreakable Rainbow’.

LBB> How did that play into your 'Clothes Reborn with Pride' campaign being created? Tackling homophobia is a weighty task for an online clothing retailer!

Dawid> Zalando supports the LGBTQIA community in Europe. The campaign in Poland was to be a continuation of these activities. However, the situation of the LGBTQIA community is completely different here. Research shows that Poland is the most homophobic country in Europe and as many as 70% of LGBTQIA people have experienced violence. Additionally, in 2020 the so-called “LGBT ideology” became the subject of political agitation, which increased the attacks. The Clothes Reborn with Pride campaign highlights the key problem for the LGBTQIA community in Poland - appearance, orientation or gender must not provoke violence.

LBB> How has that campaign progressed since last year? And how has it played into events in Poland around the LGBTQIA+ community?

Dawid> Our campaign has had a lot of media coverage from the very beginning and has also been widely commented on by the right-wing press. It launched in August just days before the massive protests of the LGBTQIA community in Warsaw. People were violently silenced, which proved that homophobia is indeed a big problem in Poland. We supported the NGO providing legal and psychological advice for victims of such events.

LBB> How did do.MORE lead to your Valentine's campaign? What was the creative idea?

Dawid> Society associates Valentine's Day primarily with consumption. This can be seen in the Valentine's Day advertising campaigns which usually focus on unique selling offers. We wanted to do something against the marketing trends and the natural opposite of acquiring things is to get rid of them, or to be more precisely to give them a second life. So together with 180heartbeats + JUNG v. MATT we asked ourselves a question: what if we could sell clothes of our ex instead of buying new ones for Valentine’s Day? This is how we got to a pre-owned service where customers can easily exchange items directly on Zalando.

LBB And how did the idea develop from the initial thought into the finished execution? What were the major decisions along the way?

Dawid> We presented three love stories showing what people do with the clothes of their former partners. You can throw them away in an epic way screaming with anger at the same time, but remember: “there’s a better way to break up with your ex’s clothes. Trade them in on Zalando Pre-owned.” - that is where the closing line of the movie takes the viewers explaining, that instead of throwing clothes away, Zalando Pre-Owned offers the possibility of extending their life for the sake of the planet, guided by the principles of circularity. From the very beginning we wanted to keep the film in a humorous yet emotional mood, and according to the reactions of the community in the Polish and German market we did very well. It looks like audiences truly appreciated this unusual approach for Valentine’s Day.

LBB> What else are the priorities for Zalando at the moment in your region? And what's next?

Dawid> Right now we are focusing on growing our business in the region as well as providing our customers with the relevant assortment and great shopping experience. In Poland, we are planning to further develop two key Zalando solutions.
1. we want to continue supporting the local retail industry through Connected Retail, a program that enables Polish physical stores to use our platform and sell their products. We know that adapting to the virtual space is not easy, so we want to provide tools and opportunities that will let retailers easily reach millions of Zalando customers.
2. sustainability has been the foundation of our strategy for years that's why we launched the Pre-owned category, with which our customers can buy and trade in second-hand clothes. The awareness of the importance of sustainable fashion in Poland is growing, which is why we want to further develop this category on the Polish market.