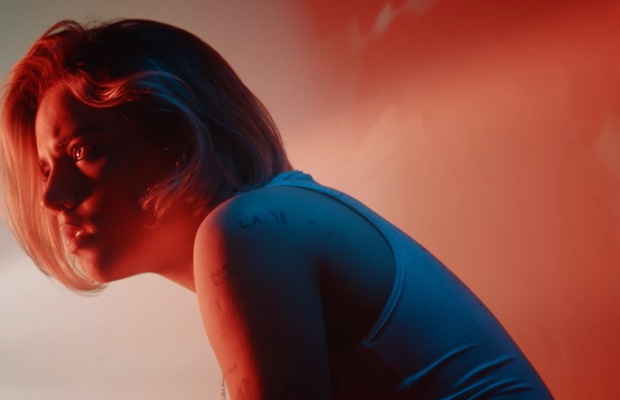 Director: Alex + Plex Studio: "The mysterious and dreamy nature of the song intrigued us from the get-go, so we wanted the video to feel very oniric throughout. Beatrich is an amazing performer and instead of focusing on a structured narrative, we decided to focus on her constantly slipping in and out of this imaginary, dreamy state of mind - whilst performing.

We wanted to climax into a lucid trance becoming quite psychedelic at the end, so we turned to Jack Exton, one of our favourite DOP, to help us convey that feeling. For the end scene we created and projected abstract visuals in the room, distorting and controlling them in real time with a midi keyboard. The visual ‘feedback loop’ technique, the wild camerawork and the frenetic light games created one of our favourite moments on set so far!”

Producer: Ryan Morgan: “Alex + Plex, known more for their innovative, analogue approach to 2D animation, created this submersive sleepwalk of journey for Beatrich to unknowingly glide through on her way to a beautiful nightmarish crescendo. This was a great opportunity for the young directors to showcase their ability to capture live imagery of an amazing performer such as Beatrich whilst maintaining their conceptual eye throughout the track and sprinkling it with subtle and majestic VFX elements. I would not normally suggest a director edit their own video but this was an occasion where it was totally worth it! This was our first video out of lockdown 1.0 during the intense heat wave of last summer so no one really knew what to expect on the day ( let alone see another human in the flesh after months of isolation) and the fantastic Alex + Plex had suggested shooting at their studio on the canal in Haggerston, this was a lovely idea as the crew got the opportunity to dip their boiling hot toes in the canal on our lunch break for a well deserved cool down! A big thanks to DP Jack Exton, gaffer Helio Riberio, colourist Jonny Tully and all of the crew who brought Alex + Plex’s live action debut to life. ”

10 Things I Wish I Knew When I Joined the Industry