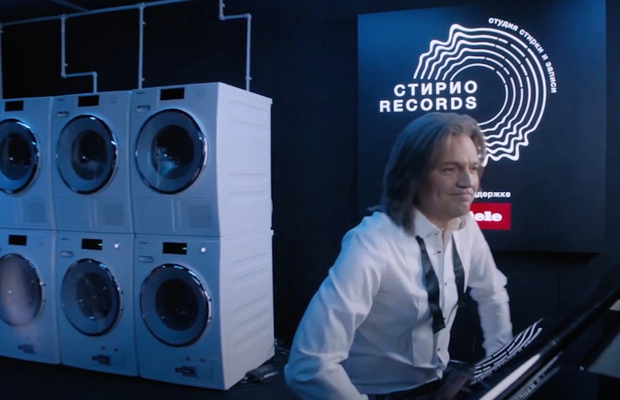 Miele and Serviceplan Russia teamed up with famous Russian singer Dmitry Malikov on an unusual initiative to turn a laundry full of Miele washing machines into a fully functioning recording studio.

In an ideal world you need complete silence to record music, so is it possible to record an album with washing machines? A ground-breaking new project from Miele and Serviceplan Russia named ‘Laundry Records’ proves you can, if you use Miele washing machines.

For the campaign, Serviceplan Russia’s House of Communication in Moscow transformed a real working laundry into a place where silence is paramount – a recording studio. The project involved seven days of construction, 10 high sensitivity microphones, an audio console and three sound engineers. The experiment with Laundry Records was made possible by Miele washing machines and tumble dryers. The noise level during a washing machine’s cycle is one of the key factors determining consumer’s choice of brand – and Miele home and professional appliances are proven to be some of the quietest in the market. But Serviceplan Russia wanted to shout loudly about the low noise levels of the Miele machines: so the creative team came up with the concept for ‘Laundry Records’, an  unconventional and genuinely product-oriented project.

The first person to use the studio was Dmitry Malikov, a legend of Russian pop music, who wrote and performed ‘Keep Spinning’ a classical composition composed especially for the project, and we captured the performance live, while the washing machines never stopped  working. Recording Malikov’s new neoclassical composition in these unusual circumstances was a great responsibility. Grand piano, guitar, clarinet, drums and chimes – every instrument had to be recorded clearly so that Dmitry’s touching melody could sound perfect. Dmitry and his musicians played the track a number of times, and the spinning drums didn’t seem to bother them or inhibit their performance. In honour of this outstanding experiment, the composition was given the name ‘Keep Spinning’.

Dmitry’s track was launched on Spotify, quickly gaining popularity on Yandex Music and purchases on iTunes. The music video filmed inside the studio proved the recording was authentic. The success of the recording with Dmitry in the laundry recording studio, proves that the noise levels of Miele washing machines and tumble dryers really are minimal, to the point of being able to record music unhindered when the machines are functioning.

And the project didn’t stop there – quite the opposite: Miele invited musicians to record their  own songs in this unusual studio, and a few brave ones with music needing a high-quality recording were invited and became part of the first album made with the participation  of washing machines.

‘The art of silence’ album appears on mainstream platforms such as Spotify, Apple.Music and Russian Yandex.Music where you will find great tracks and not the faintest trace of the noise of a working laundry.  The project became a hot topic of discussion in popular Russian and international media by musicians and readers, and the number of searches for Miele increased by 17%. The successful  campaign earned 341,050,137 total OTS during two and a half months of the project, and of that 181,688,358 was unpaid OTS. And most importantly, the level of awareness grew dramatically, showing the highest numbers for years.

There was also a competition launched inviting people to record a song in front of a personal washing machine and post it with #стириоrecords. Entrants included singing families, professional musicians, guitar solos and DJ remixes. The competition winner filmed himself singing and playing the piano, while sitting in his bathroom wearing holiday garlands.

The project’s execution required the joint effort of a large team: Miele’s marketing teams for both home and professional appliances were in charge of procuring the access to the laundry and all the work with the appliances. Redesign and professional recording of the track, as well as supervision over the artist, was made by Fancy Music. The production company responsible for the shoot were Antidrama.

Idea, strategy, visuals for all of the campaign’s elements including identity, landing page design, single cover and supporting advertising materials were developed by Serviceplan Russia, with PR support by Louder agency and media placement by Mediaplus. All the three agencies are part of Serviceplan Group and make up the House of Communication in Russia. Operating according to single-window approach, all the division work in synergy and guarantee that all the campaign’s elements are integrated.

Executive creative director Evgenia Arakbina commented: “This project shows that the idea is key, noot just what media you choose, but how you can bring creativity to your product. The Laundry Records supported by Miele project was made with Übercreativity principles in mind. You can see the product, use of music, PR, new aesthetics, digital promotion, but the essence of the project is the idea itself. Plus there was a  huge amount of effort put in by a big team to execute the project excellence”

Miele commented: “Recording a track in Stirio Records was an experiment and even a challenge both for us and the musicians, including Dmitry Malikov. Some people could be sceptical about the sound quality in a room full of working washing machines and tumble dryers, but Miele appliances were up for the job and showed their best side. Such benefits of our washing machines as silent ProfiEco motors and ‘Extra Quiet’ option for additional noise cancellation work stronger together, and help to provide something more than just comfort at home. You’ll see and hear this ‘more’ yourselves when you watch the video with  the new track from Stirio Records - Keep Spinning.’