If You Think Agencies Can’t Write Any More, Don’t Forget: It Takes Two to Tango.

Bee Pahnke, head of voice at Grey London, considers what sort of environment ad agencies create for copywriting these days 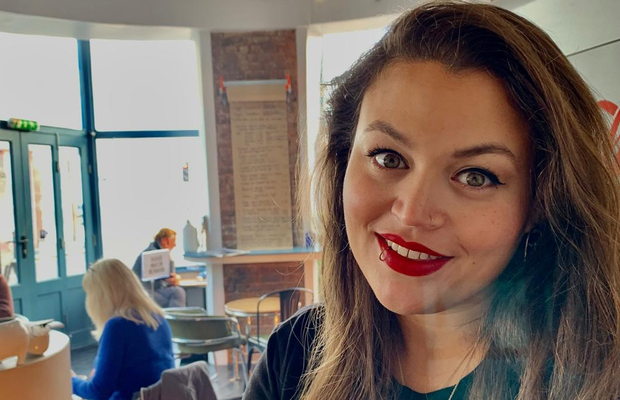 “No one can write in advertising agencies anymore.”
It’s a provocative statement.
Bold and definitive. Guaranteed to grab headlines.
Provoke a wry grin in some and ruffle the feathers of others.
But like all good headlines – newspaper or advertisement – it only tells half the story.
I’ve worked as a writer in a smorgasbord of different-flavoured agencies. Branding, digital, packaging, writing consultancy, advertising, and a few bonus combos. And in every single one, I’ve heard the same statement laughed or lamented: “Our job would be a lot better/more fun/more creative without the clients.”
I don’t always agree with that headline either.
But then again, that comes back to my original point about headlines.
Agencies don’t work in unrestrained, independent bubbles. We work for clients, first and foremost. In the best examples of this relationship, we’re collaborative – there’s a mutual respect and trust. An effort to understand each other, and an honesty about what we want, what we’re trying to achieve, why we’re doing this.
But not all relationships are like that.
I agree that writing is often seen as the expendable element. It’s always amazed me that – more so in branding agencies than advertising – the writing department is the smallest. Or the one manned by a lone freelancer, being dragged in at the end of a project to ‘just do the words’ or whip up a tone of voice, after all the rest of the strategy is signed and sealed.
And while every single person I speak to one-on-one tells me how copywriting is making a comeback, it’s going to be the thing everyone cares most about, it’s growing as a key part of the job – I’ve been hearing that for years. All the while, clients scrimp on the copy budget, constrain the remit for creativity and strategists or planners dictate the words.
But I do believe things are changing. Grey London has hired me in a brand new role – head of voice – to champion the creativity of writing and hone the craft. To push our clients further and boost the skills of our team. To make sure we’re delivering the very best creativity we can.
It’s an unusual move for an ad agency, for sure. Plenty of friends and colleagues at writing consultancies have raised their eyebrows. But I see it as a sign of commitment to making real change. I hope we’re the first of many.
If you feel like your agencies aren’t giving you great writing, I’d encourage you to take a look at the relationship as a whole. Is there trust going both ways? Is there room for your agency to be creative, and an openness on both your parts to explore something unexpected? Are you both ambitious for better?
If the answer to those questions is no, then not only will your time together feel more like hard work than good creativity – but it’ll show. Take this leaflet I picked up in Melbourne a while ago, for their Myki card (think Oyster card but down under): 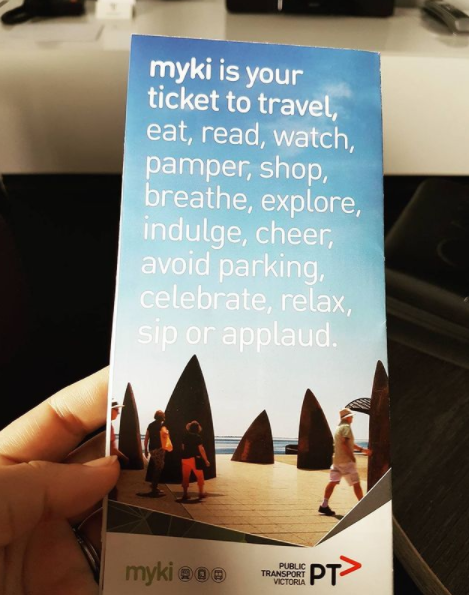 A beautiful, emotive piece of writing painting a picture of the opportunities public transport open up – and wedged uncomfortably in the middle, ‘avoid parking’.
It sticks out like a sore thumb. Anyone reading that can tell the writer didn’t want to put it in there. (And with the experience I have under my belt, I’m fairly sure a phrase like ‘key benefit’ will have been thrown around in the argument over it.) What we’re left with is a compromise that leaves everyone – including the audience – disappointed.
Isn’t it such a shame?
It’s been suggested that the future of this craft lies in freelancers. Some of the best writers I know are freelancers, so I can see why Mr Hegarty would suggest that. But that won’t solve the issue. As a freelancer, you don’t get a say in where in the process you’re engaged. You don’t get to steer as strongly, and you often don’t get to fight the case for your own work with the clients.
You also don’t get to oversee as much of the creative work. A strong tone of voice doesn’t spring up out of nowhere – it needs to be weaved consistently across a brand. Freelancers are often brought in for specific projects, and lose out on the opportunity to work their magic across the board.
So while brilliant freelancers can boost creative work, without the ambition and commitment within both the agency and the client, they won’t solve the problem.
If you want to see brilliant writing back on the table, trust your writers. Respect the craft they’ve honed over many years. And if what they’ve written doesn’t work for you, work with them. Give constructive feedback to help them create the work you’re dreaming of – or better yet, work you’d never dreamed of. Resist the urge to grab your keyboard and write your own. (After all – yes, everyone is a writer. But only some of us have made a career of it.)
When you do those things, you open up the potential for beautiful, strong and moving writing. Writing that will make your laugh and blow your socks off. Writing that will make you cry and make you famous.

Pringles Real Time Reactions Bring the Fun Back to Football