Inside the Jury Zoom 2021: Craft and Heart in the Irish Local Judging for the Immortal Awards

Competing agencies and companies united to showcase the best of Ireland on the world stage, writes LBB’s Alex Reeves 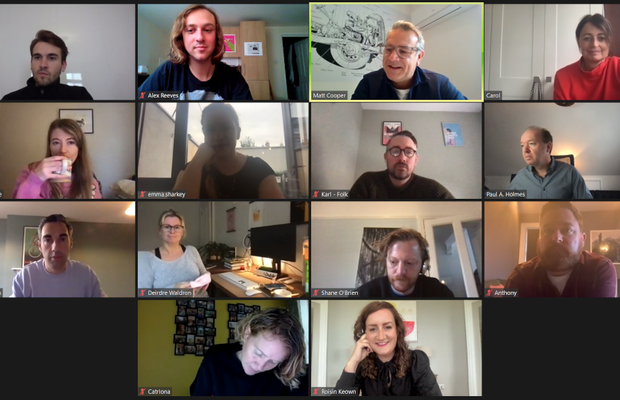 Thursday last week saw more pieces of work elevated to the European regional round of judging for the Immortal Awards - hosted in partnership with global partners Nice Shoes and regional partners CHEAT - as the Ireland jury landed on four projects to put through. 50 entries were initially whittled down to a shortlist of 18 via online judging before the jurors convened virtually to decide on which pieces of Irish work would go forward to battle on the European stage.
The judges representing Ireland were: Emma Sharkey (CSO, Rothco), Carol Lambert (creative director, Publicis Dublin), Deirdre Waldron (CEO, TBWA\Dublin), Shane O'Brien (executive creative director, BBDO Dublin), Karl Waters (creative partner, Folk Wunderman Thompson), Kris Clarkin (creative director, Boys+Girls), Laura Rice (art director, In the Company of Huskies), Catriona Campbell (managing partner, The Public House), Roisin Keown (founder and executive creative director, Brill Building), Paul Holmes (owner and executive producer, Ponder) and Anthony McCaffery (head of post-production. Motherland).
Similarly to other juries, the Irish jury took the concept of immortality to heart. One thing Catriona particularly wanted to highlight was: “The focus on what makes an Immortal piece of work, and a group of people from competing agencies really wanting to unite to showcase the best of the best of Ireland and for Ireland to truly compete on the world stage.”
She was proud of her country’s standard of submissions on the whole, saying: “I think our work is more mature. As a creative nation we’ve lots of tools in our toolbox and we’re not just leveraging our wit or charm anymore.”
Karl was interested in the process of considering Irish creative work in the context of a global award show. “There were some really interesting conversations around work that has won hearts and minds here in Ireland and whether that translates into global creative excellence,” he said. “The ones we put through we very much believed they did.”
A favourite of Karl’s was one of the finalists, a print campaign for the Samaritans that he thought was ‘conceptually smart and crafted beautifully.’
“Interestingly there are two pieces of print in there and two initiatives that better the lives of people. So what does that say? We’ve got craft and heart, perhaps,” added Karl.
“I was really impressed with the overall standard of work that was shortlisted,” said Kris. “There was a diverse spread across different mediums and from lots of different agencies.”
Echoing his fellow jurors’ remarks, Kris added: “The jury conversations focused on what pieces of work were truly good enough to represent Ireland at a global stage. There were no egos fighting for their agency's work. It always felt like we were working together to come to a collective decision.”
For Kris, a stand-out finalist was Saylists for Warner Music Group by Rothco. “Saylists is a truly original piece of work,” he said. “I love the craft and thought that went into every element of this campaign and I hope there are kids all over the world interacting with it and learning from it.
“There is a lot of clever purpose driven work going forward from Ireland this year and given the year or two we’ve just had that’s no surprise. These are ideas that are borderless and wouldn’t feel out of place in other markets. Saying that, I’d love to see a little bit of silliness go through next year!”
Roisin found the debate over whether Covid-era work will date to be interesting, with "the conclusion being reached that the work that transcends topicality as its primary attribute winning out. I think the Vodafone work deserves its place because of this."
She also agreed that Saylists is the most obviously stand-out piece, calling it "just a great smart and original innovation that prompts people to think differently about what advertising and marketing work can achieve."
Being honest, Roisin admitted that the many projects that didn't get through as finalists, "probably says it wasn't the strongest year, looking at the finalists as a whole, but that true originality and craft of a worldwide standard is here, and thriving."
The full list of Finalists are: FBD - ‘Sound Support’, Samaritans - ‘Deep Down’. Vodafone - ‘The Hidden Pandemic’ and Warner Music Group - ‘Saylists’. Check them all out here.
The regional European round of judging, which will include the UK, German, Irish and other shortlisted work from across Europe, will be judged by a selection of jurors from the continent, and will take place on Thursday 4 November before the final, global round on Thursday 18 November.