Canada and the USA came together to vote on work from across the region, as LBB’s Addison Capper reports from the judging session 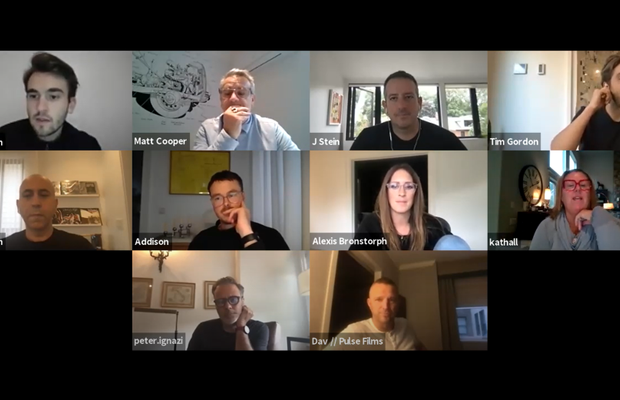 Eight projects from the North America region are through to the final global round of judging for The Immortal Awards, hosted in partnership with global partners Nice Shoes and regional partners Whitehouse Post.
That number is the result of 319 entries from the US and 54 from Canada being whittled down to a 16-strong shortlist by dedicated local juries for each market. A jury representing both countries convened on Friday of last week to hash out which of the 16 deserved a place in the final round.
The jury representing North America were: Tim Gordon, co-chief creative officer at Droga5; Kathleen Hall, corporate vice president-brand, advertising & research at Microsoft; Davud Karbassioun, global president, commercials & branded entertainment at Pulse Films; Tiffany Rolfe, global chief creative officer at R/GA; Peter Ignazi, global chief creative officer at Cossette; Zak Mroueh, founder and chief creative officer at Zulu Alpha Kilo; Alexis Bronstorph, chief creative officer at TAXI; and Josh Stein, chief creative officer at McCann Canada.
Much of the successful work was very much rooted in culture and spoke to the times that North America and much of the world is facing right now. Five of the eight had a focus on diversity. Beats by Dre ‘You Love Me’, Blacktag ‘Black Art is Black Money’ and City of Chicago ‘Boards of Change’ all spoke to racial inequalities in the US. Mastercard ‘True Name’ allows people to display their preferred names on their payment cards and Pfaff Harley-Davidson ‘Tough Turban’ could prove to be lifesaving for members of the Sikh community in Canada and further afield. Meanwhile, Canadian Women’s Foundation ‘Signal for Help’ and Reddit ‘SuperbOwl’ are both certainly influenced by the pandemic. “When you look through the industry’s history books, the best advertising is always a reflection of the times you live through and the state of society at the time,” says Zak. “So it’s only natural that brilliant ideas like this have so much power and resonate with so many people.”
The Blacktag ‘Black Art is Black Money’ piece of film is one that has almost subtly glided through both the US and North American round of judging with next to no resistance. Directed by Akin Adebowale and Ousman Sahko Sow, the founders of Blacktag, an online community of Black creators, and entered by Company 3 (who did the grade), the film serves as a mission statement for the business. It opens with a clip of Little Richard as a presenter at the Grammys in 1988 who, despite his influence on rock and roll, had never even been nominated for a Grammy. It also stars six Black creatives sitting around a book called ‘White Book of Atrocities’, which serves just as a prop but is filled with examples of cultural appropriation and discussion on the influences of Black culture on everyday trends. Its message is similar to Beats by Dre ‘You Love Me’ but the execution of each is wildly different. “One of the standout pieces for me was the film Blacktag,” says Zak. “Content pieces don’t always resonate well in an advertising jury room filled with people with short attention spans, but this film kept every judge glued to their Zoom screen.”
The only piece of work remaining that we haven’t mentioned yet is Heinz ‘Draw Ketchup’, a campaign removed from the social good realm of the rest of the Finalists, a fact that, if anything, speaks more to its quality. The campaign simply asked people all across the globe to ‘draw ketchup’. The result is that they all drew Heinz Ketchup. It’s an idea from Rethink in Canada but would work in any market.
The full list of finalists is: Heinz 'Draw Ketchup' (Canada); Canadian Women's Foundation 'Signal for Help' (Canada); Pfaff Harley-Davidson 'Tough Turban' (Canada); Beats by Dre ‘You Love Me’ (USA); Blacktag ‘Black Art Is Black Money’ (USA); City of Chicago ‘Boards of Change’ (USA); Mastercard ‘True Name’ (USA); Reddit ‘Superb Owl’ (USA); Check them all out here.
The final, global round of judging will then take place on Thursday 18th November, in which all regional finalists will compete for an Immortal Award or Commendation status.