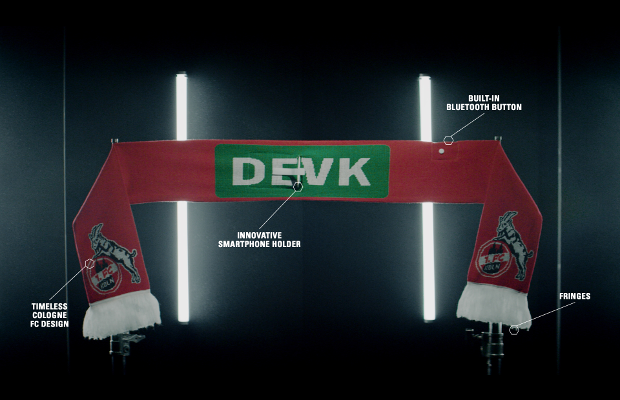 German football team 1. FC Köln is fighting to get promoted back into the Bundesliga. As part of its commitment to the team, DEVK insurance is once again standing shoulder to shoulder with the fans as a true problem-solver. In this case with a genuine innovation, an invention! The selfie scarf, created by Hamburg creative agency Grabarz & Partner.
Football is developing all the time. And 1. FC Köln along with it. To make sure they get promoted back into the Bundesliga, the players are training using the latest methods and cutting-edge equipment.
Everyone is giving it their all in the final burst at the end of the season. The trainers, the coaches, the fans. But they’re facing a challenge: they can’t cheer their team on and share their experiences online with others at the same time.
Under the long-standing campaign motto ‘We make your problem ours’, DEVK Versicherungen is once again tackling a problem and this time presents a solution in the form of a product innovation: the selfie scarf – the world’s first scarf that can take photos while you’re celebrating.
With an integrated mobile phone holder, in-built Bluetooth shutter release button, real fringes and a timeless 1. FC Köln design, it is the secret weapon in the quest for promotion. FC fans can now cheer on their team uninterrupted without missing the moment to take a selfie.
In a strictly limited edition, eleven of these selfie scarves will be up for grabs until April 12th. On the DEVK Facebook page, a comment can be posted under the product video as to why the commenter thinks they should get one of the scarves.
To raise awareness of the prize draw, the product video will go live following a short teaser phase. It will be deployed on over 270 websites relevant to sport and football.