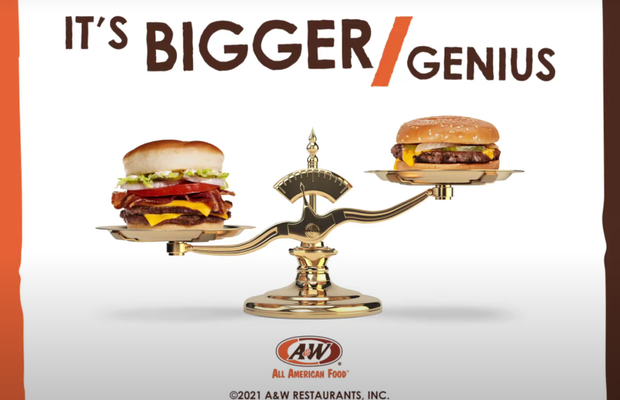 In the ‘80s, burger chain and root beer giant A&W launched the ‘Third-pound Burger’ - a bigger burger than the competition’s popular quarter-pounder, for the same price. After an expensive marketing campaign, the burgers were selling less like hotcakes and more like cold patties left uneaten in the fridge. How so? Well, focus groups revealed that the average consumer didn’t realise the third-pounder was larger than the quarter-pounder - instead, believing they would be overpaying for a smaller product.

After more recently becoming a viral sensation and a cultural touchstone for marketing failures, creative agency CORNETT seized the opportunity to flip the story on its head and convert this fractional failure into a successful reboot for A&W.

The new ‘3/9 Pound Burger’ campaign uses Rooty, the A&W mascot, and a sarcastic edge to joke about the original failure. Speaking with LBB’s Ben Conway, CORNETT’s man behind the sardonic script and content strategy, Coleman Larkin, discusses righting an advertising wrong, using his own sarcastic voice and dabbling in internet meme territory.

LBB> The initial creative idea for this campaign is an agency’s dream, right? An ‘80s marketing fail turned viral sensation: is it a perfect starting point for creative?

Coleman> With the right attitude, yes. A lot of agencies and clients probably wouldn’t want to draw any more attention to a past failure because it seems, well, like the opposite of what advertising is supposed to do. But we like to look for tensions like that and roll with them when we can. It makes the work way more interesting for everybody involved. And, more effective.

LBB> Who suggested the initial idea of reviving the third-pound burger as the 3/9-pound burger? Was there a brief from A&W to use this stimulus or did you approach A&W with the idea?

Coleman>  No brief. We try to be proactive with our creative, so we went to A&W with the idea. We knew about the legend of the third-pound failure, and it was our ECD, Whit Hiler, who challenged the team to find a way to spin it in the client’s favour because he knew that’s where the action was. I shot him the idea for the 3/9-pound burger via text and he said, “Hell yeah, write it up.”

LBB> After the initial idea has been decided, how did you want to ‘unveil’ the new 3/9-pound burger? What did you learn and avoid from the original failed third-pound burger campaign?

Coleman> Well, the main problem with the original third-pound burger campaign is they never said outright that it was bigger than the competition. They didn’t really quantify or illustrate it in any way for the consumer. In retrospect, they should have said something direct like ‘33% bigger than the McDonald’s Quarter Pounder!’ The 3/9-pound burger is obviously poking fun at ourselves and everyone who was confused by the fractions, but it’s also about righting that advertising wrong with clearer copy and more illustrative art. The original campaign really was a marketing fail.

LBB> What were your inspirations for the style of the spot? The scientist poring over their notes before a eureka moment is a much-loved trope of entertainment. Did you look anywhere specific for inspiration?

Coleman> Exactly. We were looking at movies like ‘A Beautiful Mind’ and ‘Good Will Hunting’ and stuff. All those moody and dusty films that look like pipe smoke and leather elbow patches. 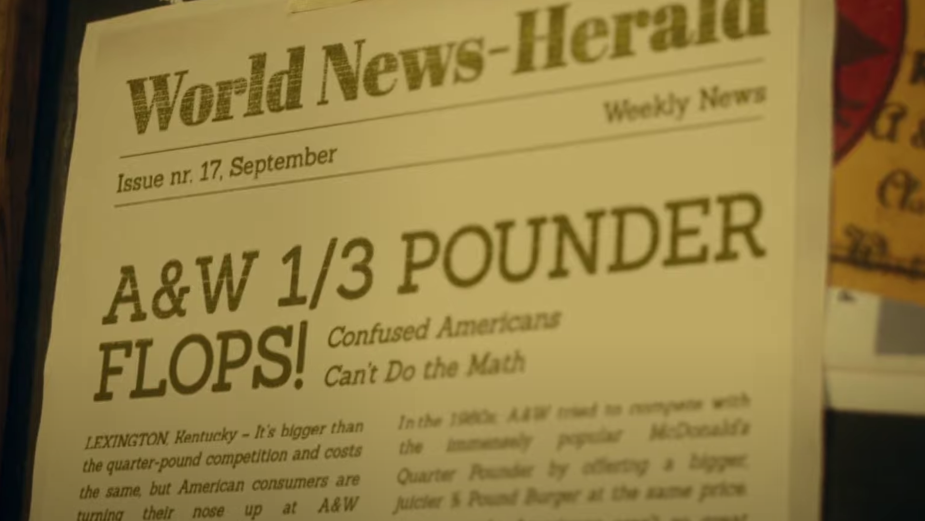 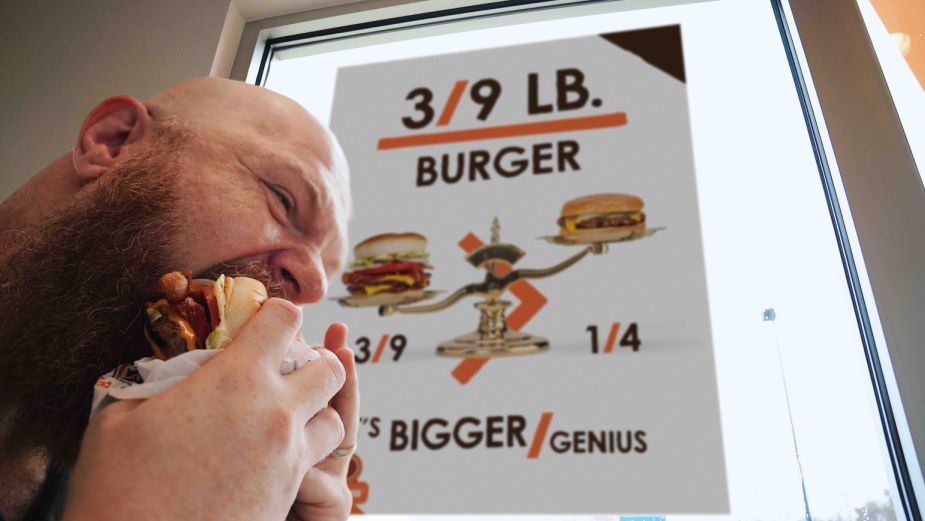 LBB> The dramatic voiceover is very funny. How was the process of writing the copy and casting a voiceover? Did you also have to consider the people who were unaware of the original failed campaign?

Coleman> I wrote the script. It didn’t take long, and I don’t think it changed much at all from my first draft, actually. That’s usually how it happens when the underlying idea is solid. I think everybody just had a clear idea in their minds of how it should look and feel, so that made it easy when it came to casting voice talent and selecting music, etc.

We needed to tell that backstory in a succinct and funny way. The voiceover does that. And there’s a lot of visual references to the original failure, too.

LBB> The sarcastic tagline ‘It’s Bigger, Genius’ is also very amusing. How did that come about? Why did you think the sarcasm would be effective?

Coleman> The tagline was another thing that just came pretty quickly and naturally to me as I was writing the script and other supporting copy. I’m a sarcastic person, so it was probably as close to my actual voice as I’ll get in this line of work. And sarcasm is practically its own language online, so I figured it would play well on the more thick-skinned side of social media who got a kick out of the original third-pound burger flop. I know this: People will never pass up an opportunity to demonstrate an air of superiority on the internet. Good for them. They’ve earned it.

LBB> What was the shoot like? Were you on set for production? Does anything memorable stand out from the shoot?

Coleman> I had to be out of town, but we found the perfect location in the nick of time, and there’s a good story about a fog machine and an evacuation that I’m sure somebody will tell.

LBB> How early on did Rooty the A&W mascot become involved during the creative process? Was it one of the first ideas?

Coleman> I think it was always a Rooty idea. He’s a huge asset to the brand and their nostalgic vibe, so we try to use him as much as possible. He’s a throwback, and people love him. Plus, in this case, it added some light-heartedness to the campaign and kept it from coming off as mean spirited. How could anyone be mad at Rooty? 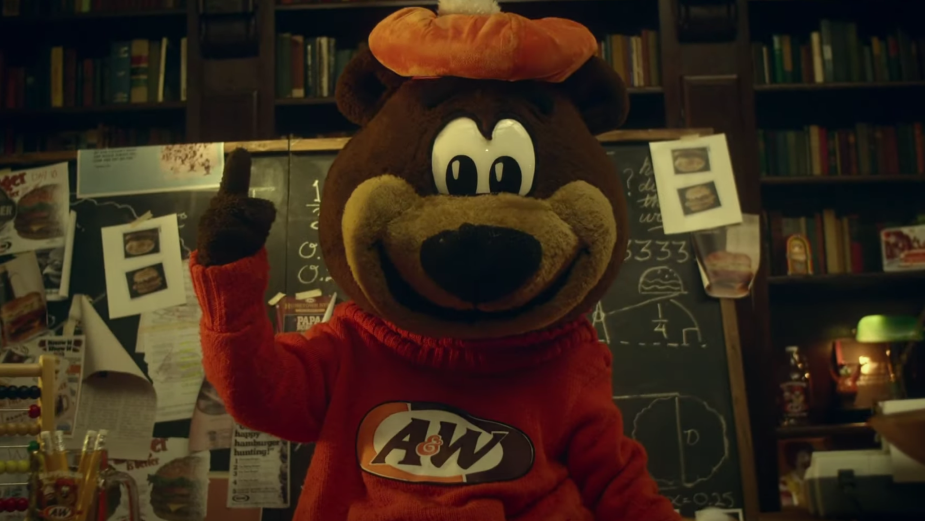 LBB> What was the most difficult challenge you faced on this campaign? And how did you overcome it?

Coleman> Honestly, it all went really smoothly. Everybody’s been excited about it from the get-go, so it hasn’t felt like an uphill battle at all.

LBB> Are there any positives or negatives to working on a campaign that’s going to instantly become part of an existing online canon or legacy? Many will know the third-pound burger story, so does that increase the pressure or expectations? Or do internet memes and trends provide opportunities for creativity?

Coleman> The obvious positive is you get to capitalise on all that existing momentum. As for the negatives, I guess it’s always a little risky to dabble in internet lore/meme territory because it’s a tough crowd to please, and you can never be 100% sure how people will interpret your work. One unfavourable ‘hot take’ can quickly become the dominant narrative. But overall, I think that’s a risk you have to be willing to take, especially in the earned media game.

LBB> Do you have anything to add about the campaign?

Bossing It: Stepping In and Speaking Up with Christy Hiler