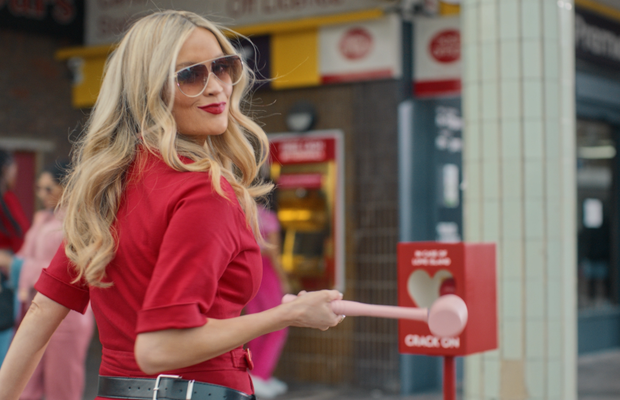 Following a one-year hiatus, viral hit and reality dating show Love Island is coming back to UK screens in June - and this time it is not a drill. ITV Creative, the in-house agency of ITV, today releases a new drama-fuelled, action-packed  commercial for the highly-anticipated series.

Reflecting a refreshed Love Island feel for 2021, ITV Creative brought up-and-coming film director and DJ, EHSAN, on board to shoot the commercial. Directing the 60” spot remotely from Mexico, EHSAN used a combination of traditional film and mixed media, resulting in a spot brimming with visual aids and emojis that mirror the excitement, drama and viral meme culture that is synonymous with the show.

The spot opens with a ‘bang’ when presenter Laura Whitmore appears on screen and smashes an emergency button with the sign “In case of Love Island, smack on” with her pink gravel. The audience is immediately transported among a crowd of running people, who are all immersed in excitement and anticipation of the release of the show this June. Throughout the film, there are several nods to the most well-loved parts of the show before it closes on Love Island narrator Iain Stirling who warns everyone that “This is not a drill” before the crowd erupts in uncontrollable hysteria.

The TVC will air on Saturday 5th June on ITV and will also be promoted on OOH, digital and social.

Tony Pipes, executive creative director, ITV Creative adds: “This is really not a drill, Love Island is back and we wanted to give fans a slap of Factor 50 and capture the anticipation and excitement that they have been missing. Eshan’s style was the perfect energy, bringing the pace and textures of social media, the edge of snatch and grab filmmaking, all wrapped in the gloss of the show. It’s a full super soaker blast of sunshine after a year of murkiness.”

Alex Mathieson, creative director at ITV Creative, comments: “With the UK version off our screens for nearly a year and a half it felt we had to come back with a bang. The idea of the campaign is to shake the nation and wake it from its slumber by reminding everyone of the fun a Love Island summer can bring. The idea was conceived by one of our Junior Creatives and rising star's Heidi Martin, and we all felt it captured the excitement we've all been missing perfectly.

We hope you agree we've delivered a noisy, playful and disruptive spot that's full of surprises just like every good summer should be.”