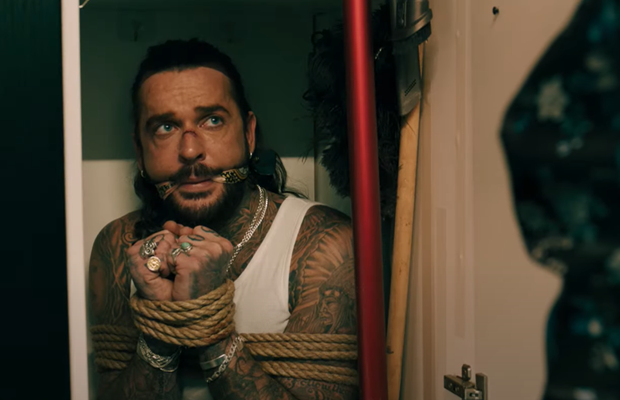 Tonight, ITV launches the next instalment in its ‘Drama vs Reality’ brand campaign, which highlights the wealth of drama and reality shows that are available on ITV Hub, in these two hugely popular genres.

The campaign features a series of unlikely pairings, and shows ITV stars from drama and reality TV stopping at nothing in the fight for viewers’ attention.

In the film, Katherine arrives home after a day on set, and starts to prepare a well-deserved aperitif. She dances freely around her kitchen, as she takes her time to de-stress and unwind from a long day. In preparing her drink, the actress runs out of tonic. We follow her movements to her store cupboard – to unexpectedly find a TOWIE star tied up and held captive. Katherine retrieves her much-needed tonic and with a cold, hard stare, reminds them to stay quiet ..

To keep viewers guessing, there are two surprising endings for the film, one featuring Pete Wicks  held captive and in another, it is Bobby Norris.

The ad airs tonight on ITV at 20:59pm, just before new ITV drama ‘Innocent’, in which Kelly stars.

The campaign was created with Uncommon Creative Studio and shot by Oscar-winning director Tom Hooper (The King’s Speech, Les Misérables) whose credits also include the iconic ITV drama Prime Suspect. Alongside cinematographer Barry Ackroyd, whose BAFTA nominated work includes the iconic Green Zone, Jason Bourne and The Big Short, and Terry Needham, the 1st assistant director on Black Hawk Down.

Google and Uncommon Inspire a Summer of Hope with ‘What are you Searching for this Summer?’ Campaign

Merchant Gourmet Launches Plant Based Cookbook You Can Eat