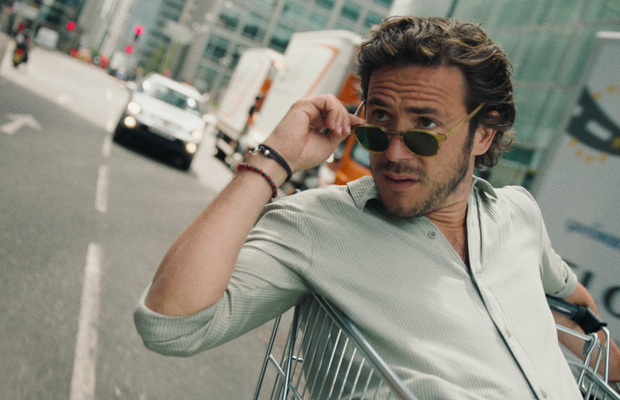 Jack Savoretti proves that he can look effortlessly cool in any situation with a new music video that sees the singer-songwriter wheeled around in a magical shopping trolley. Directed by Great Guns’ Calum Macdiarmid, the relaxed promo for ‘Secret Life’ takes viewers on a journey from the aisles of a supermarket to a field in the English countryside, as Jack maintains an impressively indifferent attitude to the fact that the trolley he sits in moves of its own accord.
The music video begins in a supermarket, as Jack appears sat in a shopping trolley that’s spinning in circles. It’s immediately revealed, however, that the trolley isn’t being controlled by anyone - and instead moves on its own. We follow Jack around the supermarket as he carelessly picks up items, throwing some aside and knocking others off the shelves. Reaching the checkout, he purchases a single bottle of wine from his seat in the trolley before venturing out onto the streets. Here, he traverses busy roads, roundabouts, and tunnels as passers-by look on in confusion - all while Jack maintains an effortlessly relaxed demeanor. Finally, we leave the city behind and reach the idyllic countryside, where Jack abandons his trolley to meet a woman waiting for him in the field.
Director Calum Macdiarmid worked closely with Jack to perfect the chilled, indifferent vibe of the promo, quickly establishing that the less he did, the better it looked. This effortless attitude was maintained by Jack throughout - who had to get as comfortable as possible in a vibrating, metal trolley - whilst Calum directed in person.
Calum Macdiarmid comments: “We essentially figured out that the direction was pretty much ‘chill out and look cool’. I was trying to capture the mood of truly not giving a fuck - it’s such a great sensation to feel and give to an audience. As I explored moments of my own life when I managed to achieve that attitude, one particular memory that sprang to mind was in my teenage years, being drunk and pushed around in a trolley. Then I wondered what it would be like if the trolley wasn’t being pushed by anyone else, but was actually magic.”
In order to create the magical trolley effect, the team came up with three solutions. The first was a specially-made remote control trolley with tiny wheels - requiring very little work to paint out in post. With producer Tom Morgan working the controls, the crew used this trolley for slower scenes, as well as shooting in 12fps to speed up any of the action when necessary. The second trolley was mounted on an AGITO dolly system, offering the team the pace they needed for scenes on the runway and the ability to use it with track - helpful especially in the field scenes. Finally, they also used a regular trolley with fishing wire, not only avoiding any unexpected electronic failures, but allowing them to get mid shots of the trolley with all the wheels working unaided.
Calum Macdiarmid adds: “The funnest part of this shoot was working out the remote control system for the trolley. I remember testing it out on the street and watching a passing Deliveroo driver seeing this trolley moving about the place on its own - I could see from his face he was wondering what on earth he was looking at. With the locations, we wanted a sense of this being an epic journey, which made the shoot into one giant road trip with 20 crew members constantly driving to different spots in England. On the motorway, you could usually tell if you were going in the right direction when you saw a car with a shopping trolley strapped to its roof up ahead.”