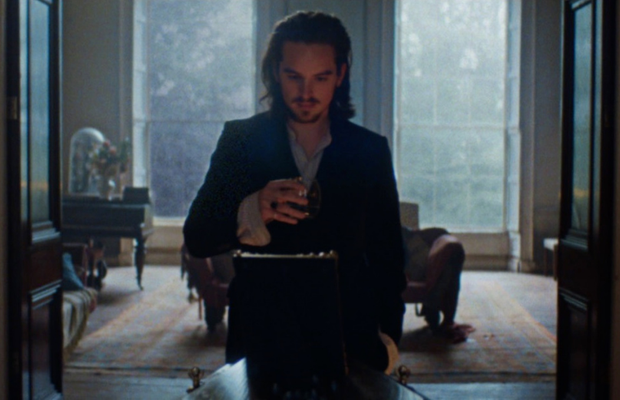 Today, James Joyce Gin releases a new brand film that celebrates two of the authors greatest works, ‘Finnegan’s Wake’ and ‘The Dead’. Directed by Dermot Malone and produced by Banjoman, the ad subverts the typical alcohol genre in a unique celebration of emotional experience.
Set in winter, the camera pulls us through the misted window of a Georgian building that typifies the architecture of Dublin. As we arrive in a rich dark wood-panelled room, a young man (Ferdia Walsh-Peelo [Sing Street 2016 & HBO’s Vikings]) addresses the guests at a wake, animatedly sharing stories of his memories of the deceased. The camera spins on its axis, imitating a circle of life, taking us through the motions of the event - the highs and lows, the laughs, the sadness and the celebration of life.
For James Joyce fans, the ad is filled with subtle nods to the author’s works, something the brand itself also carries throughout its award-winning product and packaging design. The hints of Aegean blue in the room are a nod to the first edition dust cover of ‘Ulysses’ (and the brand’s packaging from which also draws on this inspiration). The building itself is based on the one inhabited by Joyce’s great aunts which was also the setting for ‘The Dead’. The oranges dotted about the room are a nod to those eaten at the meal in ‘The Dead’ as well as the orange and clove botanicals in the gin. The cast itself even has nods to the work, with actor Philem Drew narrating the voiceover. Known for 'My Left Foot' (1989), 'King Arthur' (2004) and 'The Commitments' (1991), Philem is the son of the Irish folk singer Ronnie Drew, one of the founders of Irish folk band The Dubliners.
Director, Dermot Malone, comments: “If you’re familiar with the works of James Joyce, you will know that whilst the texts themselves may focus on sometimes darker subject matter, they are in fact a celebration of what makes us human. They pull us into a moment and reflect on what makes life beautiful. We wanted to honour that legacy, and the legacy of this gin brand by celebrating the unique way Joyce’s writing connects with people. We were also honoured by a number of big names in Ireland’s creative community. We can’t be thankful enough to see so many amazing creative people and families in the film-making community step in to support this film.”
Denis Kilty, co-founder of James Joyce, adds: “We’d been speaking with Dermot for a long time about creating something for James Joyce Gin. For many small brands like us it will have been a particularly tough year this year and it's hard to go out there and do something brave but together with Dermot I felt that we had a strong undiluted creative idea. Obviously paying homage to Joyce himself is hugely important to us but much like Joyce, the story here isn’t the setting - the wake - it's what happens there. It's about the people. We felt telling the story in this way also captures the heart of Irish culture; of telling stories, dancing, playing music and carrying it forward for others. This is something our brand has always honoured and the fact this has been supported by some incredible contemporary Irish actors, filmmakers and musicians has been the true honour and homage.”