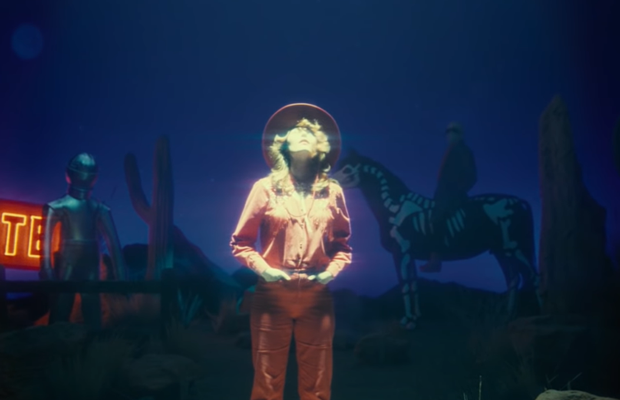 25-year-old singer-songwriter Allison Ponthier has released the accompanying video for her debut single, 'Cowboy', today via Interscope Records.  Directed by the visionary Jordan Bahat (responsible for Christine and the Queens’ 'Girlfriend'), 'Cowboy' is a bold, statement-making video that perfectly pairs with the new artist’s visually evocative lyricism. Both a touching homage to her Texas background and a bold coming out statement, 'Cowboy' finds the Brooklynite telling her story the way only she can.

'Cowboy' is, in every sense, the B-movie homage of your wildest dreams. Jordan Bahat, who is represented by Golden, has an effortlessly adaptable style and can seamlessly move across genres. Here, he and Allison playfully acknowledge the artifice of their approach, crafting a film that is equal parts aesthetically high camp and emotionally warm.

With film references including The Day the Earth Stood Still and David Byrne’s True Stories, it’s no surprise Allison is a serious cinephile. “I probably watch movies more than I listen to music,” Allison says of the video. “That’s why all my songs are stories.”

Mixing iconography from westerns with campy horror and sci-fi references, Bahat vignettes Allison within these fantastical other-worlds. The singer pays tribute to her Bible Belt roots and fascination with eccentrics like Elvira and Vincent Price in both her red-carpet ready styling and winking visual references (including a horse in a skeleton onesie and a dancing carton of smokes.)

Throughout the video, the emphasis stays on Allison’s performance as she rambles across handcrafted sets (beautifully designed by Liam Moore) reminiscent of One from the Heart. While much of the footage was achieved in-camera (lensed by cinematographer Mike Gioulakis), the team at Ingenuity incorporated VFX including the twinkling stars and UFOS which circle above Allison. The overall effect is purposefully staged and inorganic; it’s apparent Allison is “not quite at home” in either world. By the end of the song, Allison is completely transformed in full alien makeup, beaming upwards toward the spotlight of a UFO – perhaps finally in her right place.

“Allison is a serious student of cinema,” says Bahat. “She is already a very confident filmmaker who knows what she’s after and is just now getting the chance to put her ideas on film at scale. Working on this video alongside her was a purely creative experience.”