Agency teams with White Ribbon to get people talking about sexual consent, boundaries and respect for women 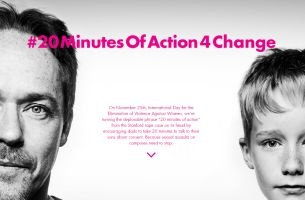 On International Day for the Elimination of Violence Against Women, this Friday, White Ribbon and J. Walter Thompson Canada, in a joint campaign effort, are asking organisations and people to donate 20 minutes to promote 20minutesofaction4change.org and get people talking about sexual consent, boundaries and respect for women.

White Ribbon and J. Walter Thompson Canada launched “20 minutes of action” back in June 2016, in light of a highly publicised sexual assault case at Stanford University, where the offender’s father dismissed the crime as “20 minutes of action.” They turned the deplorable phrase on its head with #20minutesofaction4change and encourage dads to take 20 minutes to talk to their sons about consent.

To support this initiative, people and organisations can donate their social channels, their ad space or allow a home page takeover. The agency has provided all the creative, from banners to video, cover image, avatar and custom ‘wallpaper’ which can be requested at sasha.bricel@jwt.com. All participants need to do is upload.

Google, Home Depot, LinkedIn, Yahoo Sports, Bell Media, CBC are among the organisations already on board. And an additional 14,580 minutes of talk about sexual consent, boundaries and respect for women has been pledged through the site.

Clay Jones at White Ribbon said: “The dangerous rhetoric from the Stanford Rape case, and what it can project to young men and women, has far from disappeared from our society and media. The conversation about sexual consent isn’t owned by a person or an organisation. We hope that everyone will get on board.”

Ryan Spelliscy, CCO at J. Walter Thompson Canada added: “The past months have only reinforced the need for individuals to become agents of change and that’s what we’ve been trying to do. Talk the talk and walk the walk.”