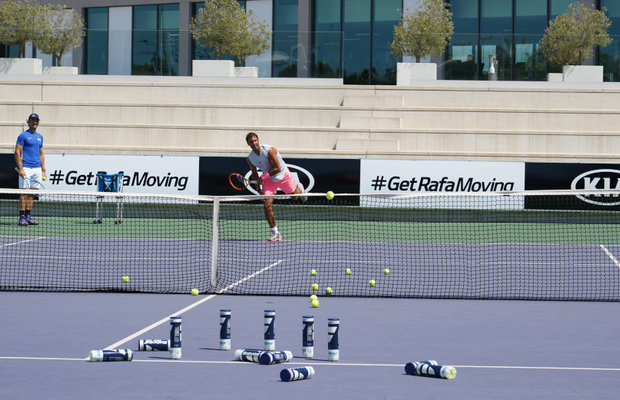 Kia Motors Corporation, partner of the Australian Open and Rafael Nadal, has appointed M&C Saatchi Sport & Entertainment to lead the global marketing activation around the brand’s career-spanning relationship with the tennis legend.

Global passion point marketing specialists M&C Saatchi Sport & Entertainment were chosen to lead the global brief after a competitive pitch process. The first campaign was an ambitious activation during the global lockdown that marked the renewal signing of the Nadal-Kia partnership, taking it beyond the 15-year mark.

The campaign, entitled #GetRafaMoving, was aired from the Rafael Nadal Academy in his hometown of Mallorca, Spain. The live stream aimed to allow fans to join in and vote in real-time, as well as ask questions to the man himself.

The second campaign, #TakeOn20, galvanised fans to show their support as Rafa took on his 20th Grand Slam title. With limited fans in the stadium to cheer for him, Kia offered its platform to make sure their voices were heard by Rafa himself on social and throughout Paris through a series of fly posters and projections.

Through the activation, Kia will also be donating to the Rafa Nadal Foundation to ensure future generations are supported as much as his fans support Rafa.

M&C Saatchi Sport & Entertainment are now working on range of upcoming projects including activations around major tennis tournament, the Australian Open, of which Kia has been a major partner since 2002.

Michael Choo, head of brand experience, Kia Motors Corporation said: “With their global brand-building expertise and creative ambition, M&C Saatchi Sport & Entertainment is well suited to help take our 16-year partnership with Rafa to a new level of engagement with fans, despite the physical distancing challenges that persist around the world. We look forward to working closely together to bring Rafa’s inspiration to as many people as possible in fresh, innovative ways.”

Rich Barker, co-managing director, M&C Saatchi Sport & Entertainment said: “Kia has long been a company we have admired for their smart and effective investments in sport around the world. They truly understand the power of consumers passions to drive value for their brand. Rafa is one of the world’s sporting greats and we are thrilled to be building on the foundations of this incredible partnership.”