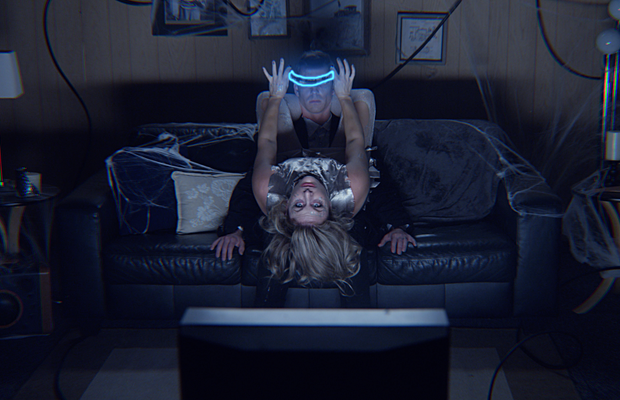 Great Guns – BALLISTIC director and YDA winner, Natasha Mynhier, alongside 37 Laines founder, Jeff Hammerton, has released Killtronics this past Friday 12th February, live on YouTube. The event was followed by a Virtual Escape Room. Killtronics is the story of a couple who finds themselves trapped in a TV trance. With the help of a pair of disco glasses, the couple breaks free, only to learn the battle is far from over and they must dance for their lives.
Starring Alex Arnold Lee, Robert Prescott Lee and Thomas Vu, the film is an experimental dance piece combining comedic elements with choreographed action sequences. Edited by Tyler Lahanas, the film makes you question mortality and the invisible ties we all have to our devices.
In their last film, 'In A Beat', starring Emmy-nominated Chloe Arnold, Natasha and Jeff combined never before experienced story elements, dance and science. In their latest short, they asked themselves what if they could smash every genre they could into one dance film. What started as a healthy challenge led them to find a unique voice, paving a way for future experimental dance videos and cinematic storytelling.
Director, Natasha Mynhier, commented: “What started as a playground for practice became an experimental piece that we are proud of. Somehow releasing this strange film on Valentine’s Day weekend during a global pandemic feels poetic. We aim to inspire levity and a sense of wonder during a dark time.”

Great Guns USA MD, Oliver Fuselier, commented: “At a time in US advertising where dance and movement seem to be what brands are using to sell products, I feel that Natasha has it in spades. Her creative approach to film certainly seems fresh, current, and inventive. I think she has a long career ahead of her.”
“It’s great to see Natasha’s drive and her collaborations with Jeff deliver work that challenges the way we’re used to seeing dance on film." added Great Guns founder and CEO, Laura Gregory. "I can’t wait to see what they come up with next.”