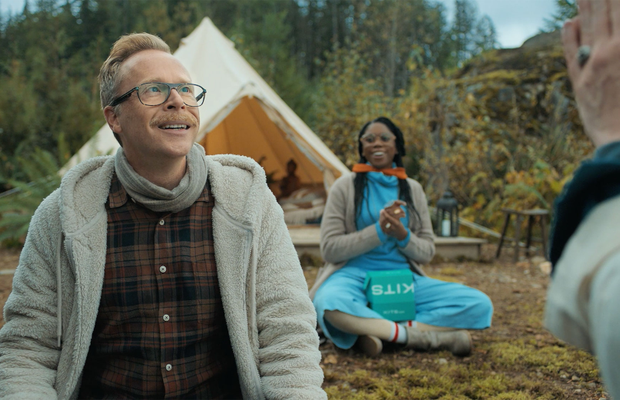 KITS Eyecare Ltd., a digital eye-care platform based in Vancouver, British Columbia, has launched a North American advertising campaign that will consist of TV, print, digital, audio and social content. The integrated campaign 'Open Your Eyes' launched nationally following a successful initial public offering and is meant to enlighten consumers so they expect more when it comes to buying contact lenses and glasses online.
“With KITS, we make buying glasses and contact lenses online fun, easy, affordable, and fast,” said Joseph Thompson, KITS co-founder and COO. “We’re excited to announce our new campaign and to invite customers everywhere to experience KITS and order from the comfort of their home...even in their jam jams.”
'Open Your Eyes' introduces a humorous KITS Guru whose unique approach to mindfulness provides new perspectives; enlightening consumers so they can see that shopping for contact lenses and glasses should be simple.
KITS maintains one of the highest inventories in optical products with over 400 styles in glasses and over 70,000 frames in stock as well as KITS’ own brand and other designer styles including Tom Ford, Ray Ban, Oakley, Gucci and more.
KITS’ production facilities are located in Vancouver, British Columbia. Glasses are produced in as little as 10 minutes and shipped within one or two days. The brand is so confident that customers will be blown away by the KITS experience and become customers for life, that they are offering your first pair of glasses free.
The campaign was created by OstrichCo. Based in Toronto and NYC, the agency was awarded creative and media AOR duties in September 2020 without a review. OstrichCo is led by Ostrich founder, Patrick Scissons – formerly global CCO of KBS (now Forsman Bodenfors).
Untitled Films produced the campaign, led by director Mark Gilbert and executive producer Tom Evelyn. The 2021 campaign roll-out includes Canada, US and UK markets.

'Nothing' Really Takes Off in Ostrich Studios' Global Campaign for Fiverr