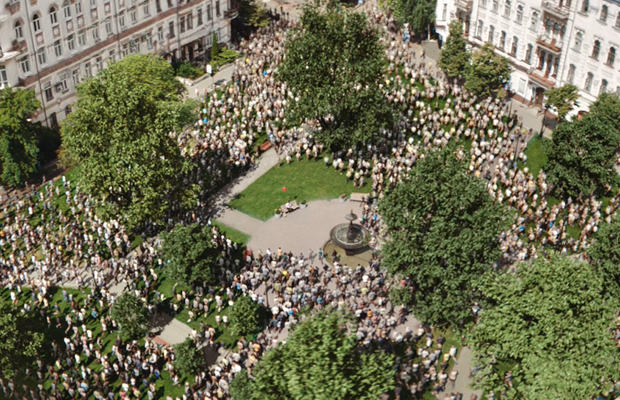 The playful campaign launches with a 60-second film which follows an epic game of balloon keepy-uppy as it draws in an entire city.

The film opens on an office worker feigning interest as his manager makes small talk at a dull office party. A red balloon detaches itself from the ceiling and floats towards our man, who can’t resist sticking a foot out to keep it off the ground. His colleague watches the balloon with laser-like focus, before racing through the crowd and athletically sliding across a desk to keep it up. With all eyes now on the balloon, the office fan blows it towards a window. The entire office pours down the building stairwell, before the action spills out into a street. The game escalates as it moves through a city, with hundreds of people trying to get a hand to the balloon to keep it in the air.

Shot in the Ukraine earlier this year, the production was filmed in line with Covid guidelines, and included hundreds of actors and extras, as well as the use of CGI to build on the large crowds and epic scenes.

The film is set to a thumping soundtrack ‘Let’s Go’ by the Norwegian garage rock band The Laundrettes.

This is the third campaign delivered for Ladbrokes by creative agency Neverland since they were appointed as lead agency in May.  The accompanying media campaign was planned and executed by long-term partners the7Stars.

‘Balloon' launches across digital on Friday 17th September and on TV on Saturday 18th September with a hero 60-second spot on Channel 4 during the broadcast of Deadpool. The campaign will be supported by multiple cross-channel activations, including via YouTube, Facebook, Instagram, Snap, Azerion and Verizon.

Entain’s Dominic Grounsell, MD for UK and Ireland Digital, says: "We love this film and can’t wait to see it air across digital and TV. It’s a campaign that is all about community, shared fun and entertainment, and brilliantly brings to life our strapline "We Play Together".  It's also the first time that anyone in our industry has launched a brand-led campaign for casino and gaming but reflects the confidence that we have in Ladbrokes as an entertainment brand."

Noel Hamilton, executive creative director of Neverland says: “Sam and the team at Rogue truly knocked it out of the park once again. This film was incredible to shoot and is one hell of a ride.”

Josh Jenkins, client lead at the7stars says: "This campaign has been an amazing team effort and will be unmissable amongst the target audience with great coverage across video platforms, and stunning brand creative. It signifies a real step change for the sector in terms of how casino and gaming brands advertise."

Behind the Work: Tetley Promotes ‘Diversitea’ Amongst Brew Drinkers