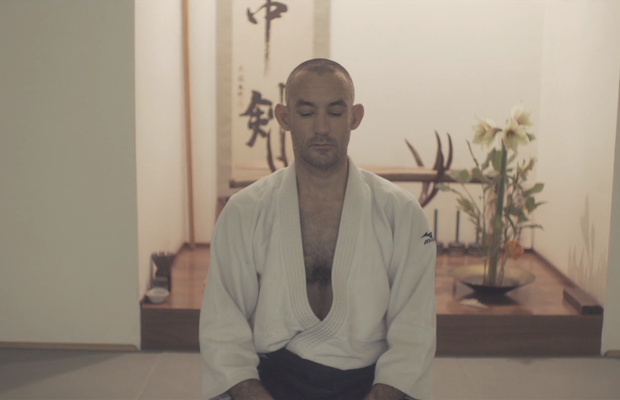 Carlotta Manaigo’s five minute short Aikido is the perfect excuse to give yourselves a moment of Zen. A profile of Ryugan, founder and master of an aikido dojo in Gowanus, Brooklyn, the film explores its mission to foster harmony through training in aikido, weapons, misogi (a Shinto purification through chanting) and Zen meditation.
The film itself is considered and precise, but it began from a moment of spontaneous curiosity, when Carlotta wondered what lay behind an enchanting red door. Thankfully she wasn’t disappointed - the door led to a peaceful, meditative film that would eventually find its way onto Vogue Italia.
Close all of your other tabs and apps, take a deep breath in and take a pause to enjoy Ryugan’s Brooklyn dojo. Then find out more about the film in the interview below.
LBB> Where did the idea for the film begin?
Carlotta> The project began when I moved to Brooklyn and started exploring my new neighbourhood. Amongst all these auto repairs and storage facilities, I came across an old iron factory building with a red door. That early fall day it was left ajar so I looked inside and was immediately captivated. The dojo resembled a Japanese monastery, it radiated a special atmosphere, a strong energy and at the same time, absolute calmness.
I decided I would join and start training but when I actually got around to do so, I found out I was pregnant. Not able to train anymore, I still felt there was something for me to do there, so I asked Ryugan if I could film him and his dojo. He was sceptical at first, as I was a total stranger and never trained in aikido, but I was very persistent and I think he appreciated that so he opened up to me.
LBB> What was it about Ryugan and his dojo that first interested you?
Carlotta> His energy immediately struck me. He had a stoic presence. The Japanese elements inside the dojo also caught my eye. There is something sacred about this place. The first time I found it I thought it actually might’ve been a mirage, so I went back to make sure it was still there.
LBB> And as you got to know him more, how did the way you viewed him change?
Carlotta> I wouldn't say my view changed. What changed was that he opened up to me and I could see how generous and compassionate and warm he was towards me, towards my project and towards his students. It was insightful entering his spaces and seeing what he reads and studies.
Over time, I was able to get to know him outside the class environment. I would sit in on a tea gathering in the kitchen or training at the beach. I feel there is a lot I can still learn from him. He's a very spiritual leader.
LBB> The film itself embodies the restrained dignity of aikido in the way it is put together somehow. How did you achieve that?
Carlotta> I was inspired by Philip Groning’s ‘Into Great Silence’ and the interiors of Yasujirō Ozu’s films. Into Great Silence follows the daily activities of reclusive monks inside a chartreuse deep in the French Alps.
I kept the filming to mostly one environment. The locations are bare, simple and raw. The team was small, just myself, the DP and the sound. I wanted us to go unnoticed, so to respect the people and the space and really transmit a sense of the composed energy of the training in aikido.
LBB> What was the process of making the film like?
Carlotta> I spent a lot of time in pre production. It took a few months before Ryugan agreed to be filmed, and then some more time to find the right DP. I am so happy Jack [Shanahan} responded and was interested, and that we understood each other. Working with such a small team felt right, because it was close and intimate and it allowed some margin for improvisation.
The soundscape in this film is also a very important element, Thomas Ripley reworked the ambient sound recordings into original tracks that are quite raw and hypnotic, based on the percussion of the Zen ceremony. The film finally came together in the editing room, working with Manuel, who did an excellent job understanding the language of the piece.
LBB> What were the main decisions for you in the process?
Carlotta> I think the main decision was to make the film. I am a very visual person and I know I have a good subject when I can visualize the film in my head, I could already see it. So I basically followed my original intuition.
LBB> Are there any moments that will stay with you as memories?
Carlotta> One time with Jack, the DP, and I sat through a Misogi (a Shinto purification through chanting) class, which was a gift from Ryugan because only advanced students are usually allowed to partake in it. We both felt completely transcended and energised by witnessing this small group of people sitting chanting and breathing. The sound was potent, the entire experience was powerful. Jack told me he had a vision of snow falling in the room as he was watching.
LBB> What do you hope people will take away from the film?
Carlotta> I hope people will really listen to Ryugan's message as it’s a powerful one, especially during these times of hardship. Life presents us with constant struggles. We have to overcome our fears to live in freedom. We don't respond with violence. We turn negative experience into positive energy.

The Work That Made Me: Casey Brooks

Feel the Funk with This Golden Goose Sneakers Spot