British freestyle rapper Tony D collaborates with The Futz Butler in a short film exploring the struggles of being Black in Britain, writes LBB’s Nisna Mahtani 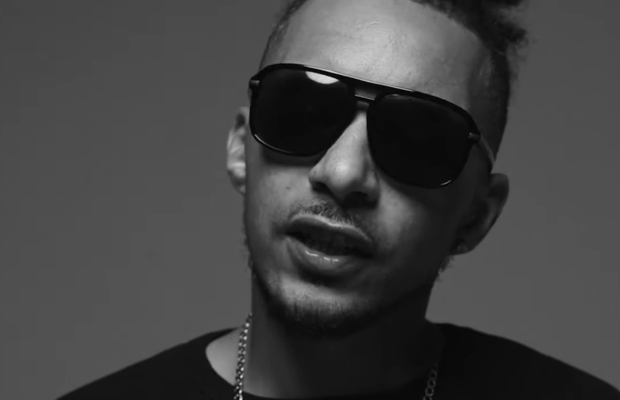 The fight for anti-racism was amplified in 2020, at a time where the Black Lives Matter movement was in full swing and accountability was called into action. But long before then and long after, people of colour have continued to fight for their rights, representation and place within Western culture.
Rap battle veteran and all-around wordsmith, Tony D, calls into scrutiny the wrongdoings that continue to weigh on the shoulders of Black individuals in Britain. From cultural appropriation to name-bias, hate speech to a vague ‘Black’ classification, Tony uses his voice to make an impact. His spoken word rap keeps him in company with fellow British rappers Dave and Akala, who are also vocal about the racial injustice in today’s Britain.
The black and white film is directed by Yaz Merrin, who was keen to use her own knowledge of biracial filmmaking to play with perceptions of colour by only using black and white tones throughout the film. Combined with striking imagery, backlit ambiguous shots and with the help of Paul Sumpter’s sound design, the trio creates a powerful image of what it means to be Black in modern Britain.
Featured during Black History Month, rapper Tony D, The Futz Butler's director Yaz Merrin and sound designer Paul Sumpter speak to LBB’s Nisna Mahtani about creating the impactful short film.

LBB> Tell us about how this video idea came up, what was the initial premise?

Paul> As a majority white, straight company - seldom in the minority, we wrestled long and hard with this project representing any notion pertaining to taking ownership of Black British struggle in any way.
However, the struggle is everyone’s problem. And we didn’t want to delegitimise our very real intention to be part of the solution, not passive bystanders. With all voices heard, we felt the best way to collectively encourage meaningful dialogue would be to create something that opens doors, not closes them.

LBB> From start to finish, how long did it take to create?

Yaz> Original pitch and conception was discussed and deliberated over for a month, while we considered what we wanted to say, who we wanted to work with and how we wanted to put this out in the world. Filming took place over 2 short days, and post-production was wrapped in 3 days, with sound and picture being passed back and forth between edit and sound design. It was a very fluid process, with each part of the puzzle informing every other part; sound inspired picture, picture inspired sound.

LBB> Why is this an important message to convey and why is it important to do it now?

Tony> For me primarily, it is to raise awareness among people who either don't know/work/associate with Black people in Britain. Outside of London and the other major cities, it is entirely possible to go about your day and not see a Black person. I want them to hear it and perhaps develop a better understanding of what it is to be Black in Britain, and/or break down any stereotypes they may have.
To change the narrative. To tell a story through the eyes of experience. Ultimately to tell a tale of struggle and survival. And for people to recognise that as far down the road as we have travelled, there is still a way to go.

LBB> The piece is shot in black and white, which is clearly intentional. Can you talk us through how you decided on this and the impact it had on the video?

Yaz> As soon as we decided this piece would centre around Tony’s prose, I knew it needed to be in black and white, in part, to relax the eye and rouse the ear. Of course, I also wanted to play with our perception of colour.
Tony, like myself, is mixed race - the tone of his skin is somewhat ambiguous in a desaturated image. This makes us reliant on other indicators, to influence our perception of his ethnicity, by which point we should land at the conclusion that it should have no bearing on the weight of his words (nor should it be in full colour). One of the favourite shots within the team is the one where Tony is backlit, so you can pretty much only see his silhouette in front of a hazy flood of light, purposefully anticipating Tony’s mystification on racial profiling later in the piece; ‘you can look differently different, yet still fit the description’.

LBB> While you stick to black and white, the lighting, framing, angles and perspective continuously change. Can you talk us through the composition of the video and the editing?

Yaz> Tony covers a lot in three minutes, from the homogenisation and flattening of Black cultures, to name-bias, and cultural appropriation. I did not want to illustrate these concepts literally, instead allowing space for the mind to wander prompted by the sound and performance.
The changing light makes the most of the black & and white grade, and moves the edit along organically. I wanted only a few, purposeful hard cuts, particularly as the image was in black and white. Affecting poetry knows how to make use of speed, space and drama, and I directed and edited this piece to reflect that. Nick Ross (DOP) facilitated this using flickering light during filming, which gave a natural softness between cuts in the edit. Although the image continuously changes, reflecting the movement of the subjects touched upon, I like to think of both more like a wave, constantly flowing and evolving.

Yaz> I was careful to choose imagery that would either be enhanced or unhindered by desaturation in post. Chess, like many games, relies on colour to differentiate opponents. The first move advantage goes to the white player, and I liked the metaphor in that for this film. The book-shop served to illustrate themes of rewritten history, making history and distilling antiquated views on race.

LBB> The sound effects are striking and add a lot to the piece. How were they chosen and how did you decide on where to place them for the most impact?

Paul> Like the other creative elements in the project, the sound needed a sensitivity necessary to support, not overpower Tony’s prose.
Key ideas of suppression, anger, protest and questioning - all of which drove a uniquely stunted sonic palette, hopefully, force the audience to listen whilst never letting them feel comfortable. I eschewed pre-sets (as is our ethos) and designed sounds from scratch with modular synthesis, simple guitar pedals and abstract Foley - resulting in a constantly evolving sound world which wrangles and morphs through moments of silence and violence, shaping the contour of the whole film as the piece rises in intensity.

More from The Futz Butler

Can Dolby Atmos Really Make Up for Empty Stadiums at the 2020 Tokyo Olympics?

Making Music: The Influence of Place on Process