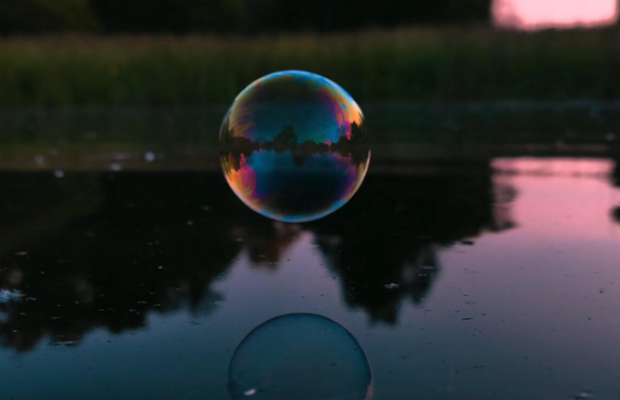 Director Frederic van Strydonck has decided that the saying ‘don’t work with animals or children’ should have ‘and bubbles’ added to the end of it. His latest project ‘The Most Fragile Thing on Earth’ is a fine example of this. Earlier this year he was tasked with shooting a film using Chinese brand Zhiyun’s gimbal – and no other brief. Giving himself creative freedom, Fred decided to explore the world from the perspective of a bubble. The end result is a 90-second film taking us on a journey through the lifespan of a bubble bouncing around different locations.
While the film is beautiful on a visual level, it's also a stark reminder about how fragile life really is and in Fred’s words serves to remind us all that while we’ve been living in bubbles for the past year, it’s time to get out there and start living life.
LBB’s Natasha Patel caught up with Fred to hear more about directing a bubble around London and the challenges of shooting on a mobile phone.

The Most Fragile Thing On Earth from Frederic van Strydonck on Vimeo.

LBB> This film was originally concepted for a gimbal... how did this come about and how did it impact the shoot?

Fred> Zhiyun reached out on social media and asked me if I’d be interested in making a film featuring their new phone gimbal, the Smooth Q3. I’ve made many promotional films for phone-related brands, but never for a gimbal company, so I thought it would be a fun challenge. And Zhiyun was kind enough to give me lots of creative freedom.

LBB> Why did you choose to use a bubble to illustrate this?

Fred> Planning a traditional shoot with a large team and actors is a bit more complex than usual these days. I thought filming a bubble instead of actors would offer more freedom and flexibility. I’m not entirely sure where the idea of a bubble came from, I had dabbled with the idea a few years back. But it suddenly felt appropriate for multiple reasons.
Number 1: Everyone likes bubbles. I don’t think anyone on this planet will disagree with that? Number 2: The actual making of the film would also be a good selling point for the gimbal.
As I began shooting tests, it very quickly became apparent that the shoot would have to be very improvisational. On each take, the bubble would do something different. A tiny gust of wind would completely change its path. (They say, don’t work with animals or kids… I’d like to add bubbles to that list.) I wanted to capture it all in camera, I knew that this would be a challenge. I would need the camera to be very stable as I was running after such an unpredictable lead actor… and that’s where a good gimbal comes into play.

LBB> The fragility of the bubble is really intense to watch - was this intentional?

Fred> That’s right. I wanted to show a few bubbles ‘dying’ at the start in order to create that tension. Our lead bubble would be the one that managed to break free and explore the world. I played around with a few different approaches to the story, but ultimately felt that elaborating on the feeling of fragility was the strongest approach. Since the shoot had to be fairly improvisational, I also knew that I had to rely on a very simple dramatic hook that hopefully would stretch throughout the entire film. I had to really embrace the improvisational element of the shoot.
The bubble would often surprise me. The day I filmed in a lake, it suddenly bounced off the water, which I never expected. On the other hand, initially I had planned a much more cynical ending with the bubble crashing into a wall, but the day I was filming on a rooftop in London, the bubbles kept latching onto the roof. This immediately felt like a much nicer way to end it. As it felt like it was the bubble’s decision and not an inevitable end.

LBB> Why was it important to shoot this on a mobile phone instead of a camera?

Fred> Shooting it with a phone was part of the brief, as we were promoting a gimbal designed for phones. But, would it be harder or easier to film with a proper camera? I’m not sure, I think each would bring different challenges. I often compare the difference between phones and a more professional film camera as the difference between making a portrait with a pencil or a paintbrush. Both can be used to depict the same portrait, but the results will look different. One isn’t necessarily better than the other though.
With my past experience in shooting with mobile phones though, it gave me two good advantages:
1) The shoot required very smooth and versatile movements in order to be able to follow the bubble. Having a smaller-sized camera definitely helps with this.
2) I was able to film in central London without getting any permits.
This was an incredibly hard shoot on a camera operating level. But I feel like I learned so much. It was also very liberating to make an improvised film and to embrace that aspect.

LBB> The bubble's reflections are mesmerising! How did you ensure you captured all of its beauty?

Fred> They say that if you cast the right actors, most of the work on set should be easier. This is definitely true here. The bubble did most of the work. It was hard to not make the bubble beautiful. However, I quickly discovered while shooting that the best results came when there was a strong light source behind the camera. And the bubble was being filmed in front of a slightly darker background.
If you look very closely, you can actually see me in every reflection of the bubble. But luckily nobody has commented on that yet. So it doesn’t seem to bother anyone.

LBB> What message do you hope this film sends out?

Fred> On a story level: We’ve all been living as bubbles for more than a year now. This film is a little reminder for me to get out there and live a fulfilling life. We’re all quite fragile creatures if you really boil it down. So let’s make the best out of it while we are here.
On a filmmaking level: You can make something beautiful and creative with any camera or tool out there.