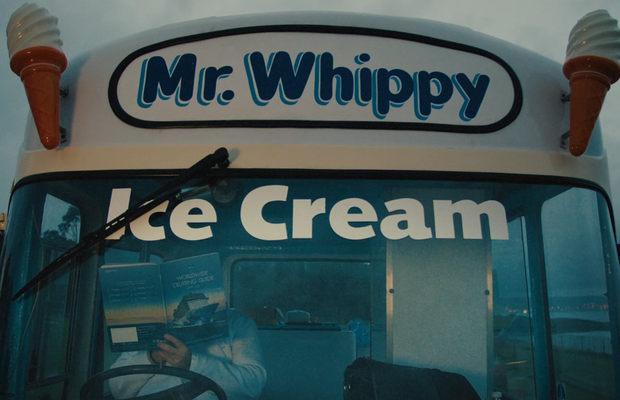 In Whippy, director Zak Razvi introduces us to an amusing selection of the weird and wonderful individuals that make up our society, all as viewed through the small hatch of an ice cream van.
Perched atop a cliff on an undeniably British-looking bit of seaside, Whippy’s van serves as a lens through which we can get to know all sorts of peculiar people, united by their love for ice cream.
LBB’s Alex Reeves caught up with Zak to get a bit more insight on his playful short film.

LBB> Where did the first thought for the idea come from?

Zak> About 15 years ago. My brother and I were eating ice cream.

LBB> Tell me about your relationship with / feelings about ice cream vans. How did that feed into the film?

Zak> Ice cream vans are great - a little box of joy on wheels. I always found it strange how an ice cream man (or lady) is in this small, confined space all day, having to engage with whoever shows up at their little window.

LBB> How did the script come together? It's a sequence of great characters but did you have any idea of the story as you wrote it?

Zak> I wanted to make a little film that held up a mirror to society in a slightly quirky way. We're all a little odd right? The film champions that we're all wonderfully unique. The story was always focused on the dedication of Whippy - over the years his enthusiasm may have dwindled, but he remains unphased by what's in front of him - he's seen it all before. I liked the dynamic of him always having to interact, yet internally he's dreaming of peace and quiet.

LBB> How did casting work and how did that feed back into the characters you're playing with?

Zak> I had a pretty clear idea of the different types of characters I'd like to show up at the window - Miss Flirt-a-lot / Rude Teen etc. As this was a Covid production, it was a case of going through many, many, many self-tapes.

LBB> What were the challenges shooting it? And how did you overcome them?

LBB> What were your favourite parts of the shoot?

LBB> As we go into another Great British Summer, what's the first ice cream you'll be ordering and where would you most like to eat it?